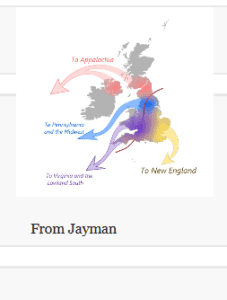 Trump and the Borderers

The Republican front-runner’s appeal seems rooted in a distinctive political culture—born in the British borderlands, and still flourishing in America’s southern highlands.

… It’s how the historian David Hackett Fischer described the appeal of Andrew Jackson and other Appalachian politicians, who set the pattern for his success centuries ago.

Fischer argued that a group he termed “Borderers”—who hailed from northern Ireland, Scotland, and northern England—brought with them a distinctive culture. The constant conflict, insecurity, and poverty of the borderlands led their inhabitants to stress sharply differentiated gender roles, to prize aggressiveness, and to disdain weakness. Strong familial loyalty was matched with a clannish suspicion of outsiders. The settlers took these attitudes with them to Appalachia, he argued, where they were reinforced, and in some measure altered, by harsh conditions along the frontier.

Okay … except that Trump’s mother was from the opposite end of Scotland from the English-Scottish border where the Scots-Irish come from.

Trump’s Scottish ancestors were from the Outer Hebrides off the northwest tip of the mainland, which is about as Highlander as you can get. The historian Fischer goes into great detail in Albion’s Seed about how the Scots-Irish “borderers” are different from the Scottish Highlanders.

Trump owns a couple of golf courses in Scotland, so the website for his Aberdeen course explains his genealogy:

The Family History of Mary Anne MacLeod, the Mother of Donald J. Trump

Mary Anne was born on 10th May 1912 at 3 Tong, Stornoway to Malcolm MacLeod and his wife Mary Smith. The family lived at Tong, a small fishing/crofting township lying 3-4 miles from Stornoway, the only town on the Isle of Lewis. The parents married in 1891 within the Free Church of Scotland, Tong. Malcolm was a local fisherman/crofter, the son of Alexander MacLeod and Annie MacLeod. At the time of the 1901 Census, Malcolm and Mary already had six children. Alexander, also a crofter/fisherman, would have been born in about 1832. He married Ann MacLeod, also a Tong resident, in 1853 and died in Tong in 1900. According to his son Malcolm, who was the informant of his father’s death, Alexander was the son of William MacLeod, a crofter, and Catherine MacLeod. William died at nearby Vatisker in 1869 and, according to his son Alexander; he was the son of Kenneth MacLeod and Catherine McIver.

That’s about as croftercentric as genealogy can get.

Another aspect is that American Scots-Irish were forged on the frontier. Has Trump even been to Appalachia or the Ozarks before this campaign? Maybe he played golf at the Greenbrier resort in West Virginia?

Fischer’s “Albion’s Seed” is a wonderful book, but its readers try too hard to make everything in America fit into Fischer’s 4 favored types of British-Americans. But you’ll notice that Fischer basically leaves out New York City from his account of American history. (The current mania in New York City over hometown boys Ron Chernow and Lin-Manuel Miranda celebrating fellow New Yorker Alexander Hamilton is a not unreasonable reaction to Fischerian a-New Yorkism.)

Trump is a pretty classic New York City Scottish-German business tycoon. Scottish-Americans used to be famous as captains of industry in the northeast (e.g., Andrew Carnegie and Charles Blair Macdonald, the founder and architect of the National Golf Links of America). That stereotype has faded, although the evidence remains that Scottish-Americans, as opposed to Scots-Irish, are considerably above average in wealth.

Trump’s vehement personality rather reminds me of Charles Blair Macdonald, who more or less was the founder of golf in America. Macdonald tended to be extremely earnest, but his whole life could also be interpreted as a heroic comic adventure. Thus the NGLA is both the best and the funniest golf course I’ve ever played. (In fact, it may be the only funny golf course I’ve ever played. Don’t ask me to explain what I mean.)

Similarly, Germans were common in New York City in Teddy Roosevelt’s day, but they’ve faded from the limelight.

Moreover, Fischer’s version of American history is laid out along north-south lines, with four different kinds of Brits moving west along the same latitudes: e.g., the Puritan/ Yankees from East Englnd were the furthest northern group, moving from New England through Michigan, Minnesota, Montana and to the Pacific Northwest. The Pennsylvanians were Quakers and their German allies who moved west through Ohio and Iowa to Los Angeles. The Borderers/Scots Irish were frontiersman who moved west from inland Virginia through Tennessee, Arkansas, Oklahoma, and terminating, like Merle Haggard, in Bakersfield. The Lowland Southerners were southern English who became the deep Southerners.

Trump however has turned this cozy framework 90 degrees into an east-west framework instead of Fischer’s north-south. He’s popular east of the Mississippi, doing well in primaries in both Massachusetts and Mississippi, but doing more poorly the further west in the center of America you go, with Cruz dominating in the Great Plains.

I don’t really understand this new geography — latitude is usually more important than longitude — but that’s another thing that makes Trump interesting after a long era of political stagnation.