Conservative Victory In UK Shows Path Forward For Trump's GOP, If They Have The Wit To See It

Above, screenshot of the NYT's before and after map.[U.K. Election Results Map: How Conservatives Won in a Landslide, by Allison McCann, Lauren Leatherby and Blacki Migliozzi, December 13, 2019]

Left Twitter is in shock this morning after Boris Johnson won a crushing majority, utterly routing Jeremy Corbyn and the Labour Party. There are the usual cries of doom and gloom from Labourites, who, like the Democrats here, have become the party of hysterical shrieking. 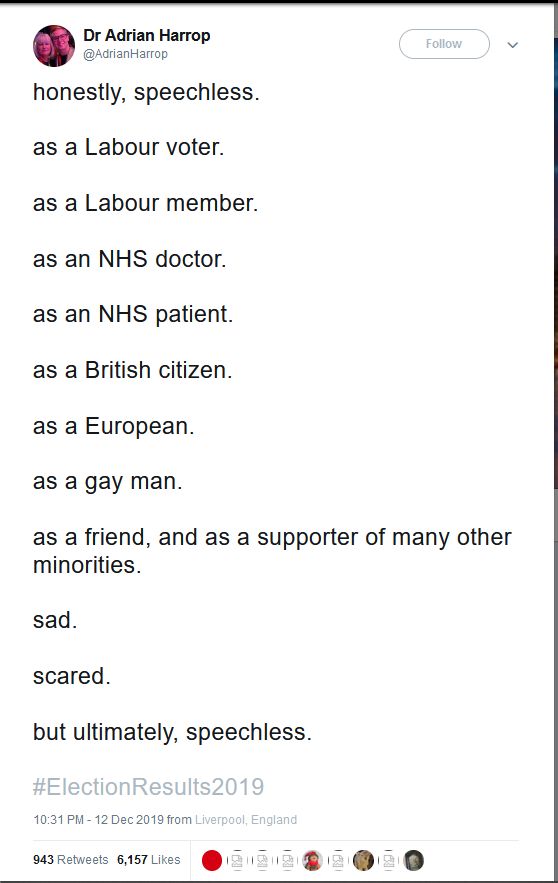 I cannot remember the last time I felt so sad, worried and utterly filled with despair.

While the Tories consistently held the lead throughout the campaign, there were some polls showing that the race was tightening. Remember, former Prime Minister Theresa May held a strong lead before she called an election to strengthen her hand in Brexit negotiations. But she barely squeaked by with a coalition government. It looked like it was going to happen again.

But it didn’t. Boris Johnson has a clear mandate to "Get Brexit Done."

One key difference between Johnson and May: the Conservatives campaigned on a strong immigration platform this time. This was wise, especially considering that many people link “Brexit” with “border control.”

However, the main issue was Brexit. The fact I can recall Johnson's slogan so easily explains a great deal about Johnson's victory. Health care, terrorism, mandatory sentences, Israel, socialism and other things were all discussed. Yet from beginning to end, Boris Johnson had one clear message–“Get Brexit Done.”

Say what you will about Jeremy Corbyn, but the man has strong views and a clear identity. He's an old-school Leftist with pure socialist credentials and a passionate following among the youth. He’s also the most despised Labour leader of modern times.

But Corbyn, warts and all, is the same man who almost toppled Theresa May's government just two years ago. He faced the same accusations of anti-Semitism and extremism then. If none of this hurt him in 2017, why did it destroy Labour in 2019?

Simple–Corbyn had no clear message about Brexit. He endorsed a second referendum, which implicitly attacks the idea of democracy [General election: Final Say referendum will be legally-binding, says Corbyn, by Andrew Woodcock, Independent, November 21, 2019]. Do people just keep voting until they get the "correct" result?

Making things even more confusing, Corbyn said he would stay “neutral” during another referendum campaign [Corbyn defends his pledge to stay neutral in second referendum, by Simon Murphy, The Guardian, November 23, 2019]. How can any party leader stay “neutral” on the most pressing issue of the day? If you are going to run on a revolutionary platform, you need to give the masses a single idea to rally around. Instead, Corbyn slapped together a grab-bag of policy suggestions. Some were popular, but an aging socialist with a history of problematic statements (including about the IRA) was not the right standard-bearer.

In contrast, Boris Johnson was relentless. “Get Brexit done,” he repeatedly said. He aligned himself with small-d "democracy" and pledged to get this issue out of the way. Were it not for Boris Johnson’s passionate support for Brexit, there’s no way Brexit would have passed to begin with. Unlike May (a Remainer), people knew where Johnson stood.

I suspect that even many who weren’t happy about Brexit prefer a decision, any decision, to even more uncertainty. The markets certainly reacted this way, as the pound soared [Johnson vows to get Brexit done after big election win, by Alice Ritchie, Robin Millard, and Dmitry Zaks, Yahoo News, December 13, 2019]. A bad plan, violently executed, is better than a perfect plan hesitantly executed. Now, everyone knows that Brexit will happen, and the country can move on.

Ireland is more complicated. The Democratic Unionist Party, which was formerly part of the coalition government, was routed, and Sinn Fein picked up seats in Northern Ireland. Ireland is a member of the EU so if the south can somehow annex the north, that issue would be settled. Northern Ireland would not have to go it alone. The stakes here are enormous, and “The Troubles” may return.

American conservatives were overjoyed about Johnson’s victory because it seemingly “proved” Bernie Sanders-style socialism is a loser. They should be cautious. Boris Johnson pledged “record funding” for the National Health Service and more public spending on infrastructure [Boris Johnson vows to smash through Brexit and toughen up on sentences as part of six-point election pledge, by Matt Dathan, The Sun, December 11, 2019]. In the American political environment, Conservatism Inc. types would be screaming that Boris Johnson is a socialist. 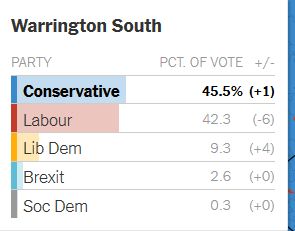 We also don’t know whether Johnson can consolidate his hold on formerly Labour areas that broke for him [The 24 Labour heartland seats lost to the Tories for the first time in decades, by Jamie Johnson, Izzy Lyons, and Ashley Kirk, The Telegraph, December 13, 2019]. Once Brexit is done, what do the Tories offer workers?

There’s a real danger that these Conservatives will do what Republicans in America do. They’ll offer patriotic workers symbolic (and largely meaningless) victories in the culture war but won’t help them with populist economic policies. If the Tories don’t support British workers and revert to bland slogans about "free markets," I wouldn’t be surprised if a post-Corbyn Labour party can win these voters right back once Brexit is out of the way.

Still, Johnson has a clear opportunity to build a new kind of Conservative party. Labour is hopelessly split between urban, wealthy, pro-EU managerial elites and its former working-class base.

Go on Twitter and look at the emotional screeds penned by effete weirdos who think Boris Johnson is the reincarnation of Benito Mussolini. What do these people have in common with the coal miners who fought Margaret Thatcher?

Furthermore, the Third World auxiliaries that Tony Blair’s government imported to “rub the Right’s nose in diversity” (their words) don’t respect the taboos about Israel. Labourites don’t just have a class conflict, but an ethnic conflict between Muslims and Jews within their own party [Anti-Semitism and Brexit shatter Corbyn’s dreams of global far-left revolution, by Alice Ritchie and Robin Millard, The Times of Israel, December 13, 2019]

In contrast, Johnson has managed to drive many Conservative Remainers out of the party, while expanding his party’s overall majority. The Conservative majority of David Cameron was a different party than Johnson’s Conservatives. This is an amazing political achievement. The Tories have deep divisions too, but this morning they clearly seem more united than Labour.

Though that’s not saying much:

.@piersmorgan "this right here is the Labour party's problem" - it's really kicking off on GMB #GE2019 #ElectionResults2019 pic.twitter.com/CndAEyH2PG

Johnson is a squish on immigration and not the brave opponent of Political Correctness he’s made out to be. However, he’s also charismatic, intelligent, and ambitious, and he may deliver for immigration patriots and workers out of sheer self-interest. He knows which way the wind is blowing.

Johnson has the same opportunity President Trump had in 2016, when he promised a “workers’ party.” Trump blew it. He supported Paul Ryan’s GOP agenda, which is why Republicans were trounced on health care and tax cuts in 2018, why Trump was betrayed by his Never Trump staff, and why the president is now being impeached.

I don’t think Johnson will be rolled quite so easily. Republicans are right to pay close attention to yesterday’s results. But they should see it as a warning as much as a cause for hope.

Workers are ready to turn to the nationalist right, but conservatives (both large- and small-C) must offer something more than rhetorical support.

Key message: it's easier for the right to move left on economics than it is for the left to move right on identity