South of the border, there are big Mexican plans for defeating Donald Trump in his campaign to become President of the United States. In an “unprecedented effort” by Mexico, that government is meddling in our internal affairs by helping legal (!) resident Mexicans get US citizenship to vote against the Republican front-runner.

Our unfriendly neighbor claims to respect American sovereignty but has a funny way of showing it. The effort is off the charts because the Mexican government is holding “citizenship clinics” at its consulates which are officially territory of Mexico.

Actually, it’s the same old backstabbing behavior with which we have become familiar.

Of course, the suits south of the border have figured out that a President Trump would likely end the gravy train of trans-border free stuff that helps prop up the corrupt pols who run wealthy Mexico.

Sheriff Paul Babeu of Pinal County Arizona recently commented on the Mexican scheming to Fox’s Neal Cavuto, reminding him of Hillary’s promise to put all illegal aliens on a path to American citizenship — a major step beyond normal Democrat Hispandering. So of course they Mexicans want Hillary, not Trump.

SHERIFF BABEU: They’re holding these actual citizenship meetings and one was held just in Vegas recently — 500 plus deferred action are looking to go to this meeting to find out what is it going to take to go from that permanent status to actually gain citizenship which means they get to vote. That’s troubling, that’s concerning, that’s unprecedented in the fact that Mexico and its diplomats are going all out to make this effort now, during our election. . . .

It feeds into the whole Democrat playbook. We saw just recently Hillary Clinton and Bernie both take the pledge by [Jorge] Ramos saying that they would not only defer action, they would never deport any of these illegals who are here.

Hillary Clinton went a step even further and says she wants to put all 12 million illegals on a path to citizenship. This is even over-reaching anything President Obama has done. 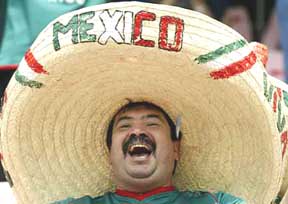 Interestingly, the Texas reporting about the consulate shenanigans provided a view into the Mexicans’ disinterest in becoming loyal Americans — instead, the desire for US voting is all about defeating Trump and the citizens who want their sovereignty defended. There is no positive feeling or gratitude toward America to be seen. In fact, the deputy consul Victor Arriaga assured the immigrants that “It is perfectly fine to have a second nationality.” In addition he observed that “People are very proud of being Mexican and want to retain their Mexican identity.”

A man from Chihuaha got the message, saying, “I won’t lose my Mexican nationality. I’ll have dual citizenship.”

This attitude is nothing new. Mexicans regard the US as extended territory of Mexico which belong to them more than us. In 1997, then-President Zedillo proclaimed, “I have proudly affirmed that the Mexican nation extends beyond the territory enclosed by its borders.”

Note also the assistance of Catholic Charities, who prefer to keep Mexicans unassimilated and culturally attached to their homeland which makes them more dependable pew-fillers.

Mexican immigrants Lilia Garcia and Antonino Reyes want to build one around themselves.

This month, Garcia and Reyes joined a growing surge of legal permanent residents across the country inspired to seek U.S. citizenship in an effort to defend themselves against the leading Republican candidate.

“I want to vote now,” says Garcia, a 52-year-old native of Irapuato. “It will be easier to get my rights, and I want to show solidarity with the people who still need documents.”

Reyes, who is 84, fingers yellowed Mexican documents that look fragile like leaves and explain life passages like birth, marriage and entry into the U.S. Reyes wants to vote, too. “I want to do this because I see this senor Donald Trump. He’s crazy,” Reyes says.

Garcia, Reyes and other Mexican immigrants have an unusual ally in their quest — the Mexican government. The U.S. citizenship workshops at Mexican consulates are a first for the Mexican government — and part of a chain of such events being held by key consulates in the U.S., said Victor Arriaga, deputy Mexican consul in Dallas. The consulate is working with groups like Catholic Charities and the North Texas Dream Team and with pro-bono lawyers.

Arriaga worked the crowd at a recent Saturday workshop, telling them they could retain Mexican citizenship while also holding U.S. citizenship.

“It is perfectly fine to have a second nationality,” Arriaga said, explaining a Mexican law in 1998 that changed the rules covering Mexican citizenship and nationality. “People are very proud of being Mexican and want to retain their Mexican identity. But they can still be a citizen here and experience their rights here.”

Not since George Wallace, the then-governor of Alabama, in 1968 has there been such a heated presidential race involving attacks on groups of people, says Jesus Velasco, a political scientist at Tarleton State University. “Right now is a special moment in the history of the United States.”

Although there are some barrier walls along some portions of the border, Trump has said he would build an ever-higher wall. He’s also said he’d increase the number of federal agents at the border, though the number increased over the last decade to nearly 20,000. And he shocked many by saying the Mexican government wasn’t sending their “best people” but people who bring drugs and were rapists.

Trump’s response to the furor: “The Hispanics love me.”

Velasco, the political scientist, said the Mexican government is trying to capitalize on the anger at Trump among many Mexican immigrants, who are likely to vote Democrat.

It’s impact is difficult to gauge, though. What is certain for now is that Mexicans have had some of the lowest naturalization rates among immigrant groups who have the green cards of legal permanent residency. There are about 8.8 million legal residents eligible to naturalize overall and 30 percent of those are Mexicans, the top percentage around the globe, according to 2013 estimates by the U. S. Department of Homeland Security.

The Pew Research Center found even more troubling findings in their 2013 “The Path Not Taken” study. Nearly two-thirds of Mexicans who were eligible to become U.S. citizens haven’t taken the step, which includes taking a citizenship test.

“For Mexicans, the language barrier and being afraid to take the test are the main reasons,” said Ana Gonzalez-Barrera, a Pew research associate. A 1996 U.S. immigration law toughened treatment of immigrants. That inspired several foreign governments to change their laws regarding dual nationality, as “a sort of protection,” Gonzalez-Barrera said. “This is the first time the Mexican government is helping out and facilitating the naturalization,” she said.

Other campaigns have been launched nationally around naturalization. Among them are the Latino Victory Project and the National Partnership for New Americans, which calls the campaign the New American Democracy. They use Trump’s “they are not sending their best” statements meshed with video of immigrants and their job titles: scientist, lawyer, community organizer, astronaut. The ending: “Our future is at stake. “NaturalizeNow.”

Across the nation, the flow of citizenship applications has increased 14.5 percent in the six months through January, the most recent data available, according to U.S. Citizenship and Immigration Services. Dallas has the nation’s fourth-largest population of Mexican immigrants, after Los Angeles, Chicago and Houston, according to the Migration Policy Institute, a D.C. nonprofit.

It can take up to six months for application processing in North Texas at the federal citizenship agency. At two weekend citizenship workshops in Dallas, volunteers saw hundreds of applicants, including a 93-year-old man.

“They are so enthusiastic about being citizens,” said Martin Valko, a volunteer lawyer at the event. Most told Valko they wanted to vote in this year’s presidential election.

Yasmin Rascon, a 38-year-old Chihuahua native with two U.S. citizen sons, said she applied for U.S. citizenship because of the anti-immigrant atmosphere in the U.S. elections.

“With the situation, I thought it was best to convert to U.S. citizenship,” Rascon said. “I won’t lose my Mexican nationality. I’ll have dual citizenship.”