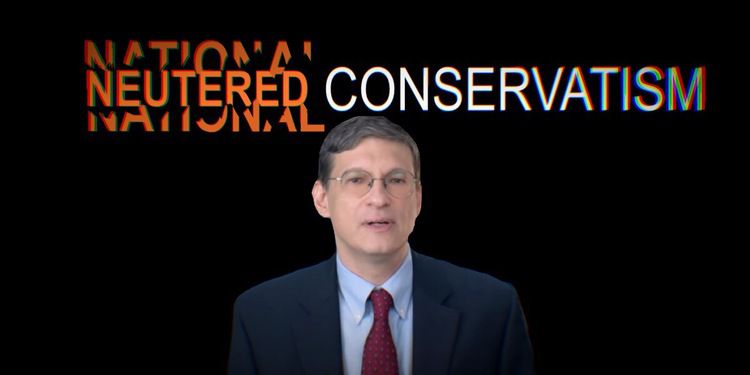 See also “East is East And West is West”: What The Hazony/Brog Heresy Hunt Says About July’s “National Conservative Conference”

[VDARE.com senior management was disinvited from the “National Conservatism” conference sponsored by the newly-founded Edmund Burke Society’s Yoram Hazony and David Brog, but the blogger ZMan snuck into what he pointedly calls “The Gatekeeper’s Ball” and has sent us this exclusive assessment. For his own reports, see here, here, and here].

In his talk at the “National Conservatism” conference just concluded in Washington D.C., Tucker Carlson joked about how after Trump’s improbable victory, he had to re-evaluate everything he thought he knew about the world. If Trump could win the election, then maybe UFOs are real. He was exaggerating, but he was serious about re-evaluating his view of the world.

Carlson also made the point that official Washington continues to struggle with the reality that Donald Trump is President. It’s why Carlson was happy to come to the conference and talk, as it was the first sign that Washington is starting to come terms with what happened in 2016. He may not be on board with the Hazony-Brog project, but he was onboard with the discussion of what comes next.

Carlson is a level-headed guy, so when he talks about re-evaluating his politics in light of Trump, he is doing so within the bounds of reason. For people like Bill Kristol [Email him]and Max Boot, [Email him] the disconfirmation has driven them to madness. Not only have they lost their previous certainty about politics, they are now imagining all sorts of weird fantasies about You Know Who coming back from the grave.

That is an important starting point for understanding what’s going on with Yoram Hazony’s National Conservatism stuff. Some of the people getting involved in his project have been critics of Conservatism Inc. for a while, so they see this as an opportunity to do damage to the Conservative Industrial Complex. Instead of being outsiders, they will get to be insiders and set the agenda.

And then there are some who have been around for a long time, but worry that the apparent collapse of conservatism could be bad for them. National Review Editor Rich Lowry [Email him] was seen shuffling around the conference, a forlorn looking character, hoping to catch on with this new thing. Heritage and AEI still get plenty of donor money, but in this age of Trump, who know how long that lasts?

It is this feeling that anything can happen which keeps the Israeli lobby up at night. For a long time, they could count on the GOP to make sure support for Israel never wavered. Conservatism Inc. was happy to police the ranks to make sure no one dared question it. The fate of Pat Buchanan and the paleocons served as a proper warning for those wondering why Israel is supposed to be our Greatest Ally.

That’s where Hazony is making his pitch. He repeatedly frames his cause as a certain sort of sandwich where the choice is fall in with his brand of nationalism or let those bad guys in dissident circles define what follows conservatism. He regularly warns about the danger of white nationalism among the young and of the “science nerds” who explain race realism in empirical terms.

The question going into this conference was whether the dustups with Peter Brimelow, Patrick Casey and Jared Taylor were just virtue-signaling—or something else. Maybe it was a stunt to draw attention to Hazony’s event. Maybe it was a way to seed the media accounts with twitter fights between Hazony and people who have been unpersoned for Noticing things.

It turns out that it is something else. At the conference, an older Jewish man approached Hazony and asked him why he was picking fights with people to his Right. He suggested Hazony try engaging these people privately and Hazony replied that he had no interest in talking to any of these people. It was clear his antipathy toward those to his Right is real and emotional.

Later, a younger person made a similar query. Hazony was even more dismissive. If he was merely virtue signaling, he would not be so dismissive. If it was just a performance for the media, there would be no reason for him to keep it up in private. Unless he is a fan of method acting, the most plausible explanation for his behavior is he really and truly fears what is on his Right.

This bring us back to the aftermath of the 2016 election, in which everyone is wondering about the next black swan to land in Washington. For a committed Zionist like Hazony, that seems to have led him to imagine a world in which the West treats Israel like South Africa. The same standards for internal conduct will be applied to the Jewish state as were imposed on the apartheid state.

This is the real motivation behind this new “National Conservatism” thing. It’s not about getting Americans to embrace nationalism, which is problematic, given the demographics and the culture. Three generations of browbeating white people about the evils of nationalism is not going to be overcome with a book and a conference. And anti-racist nationalism is an obvious contradiction.

What Hazony can do, however, is inoculate Israel against the charge of running an ethnostate, by redefining its existence in religious terms. Israel is organized the way it is, because it says so in the Torah.

Additionally, Hazony hopes to rebrand multiculturalism as imperialism. That way, when the West demands Israel take in migrants or give the Arabs access to political power, he can call them immoral imperialists.

In the same way as the “Judeo-Christian” concept redefined Christianity to be in service to Israel, Hebrew-style National Conservatism will do the same trick with white nationalism.  The whites in America, fearing what happens when they are a minority, will channel that fear into wishing they can have what Israel has. Suddenly, supporting Israel is a timeless principle of the new American nationalism.

It is an ambitious agenda and Hazony surely has the finances to make a go of it. The trouble is he is facing stiff headwinds from the old neocon cabal, the Open Borders lobby and the new Coalition of the Ascendant, which is explicitly anti-white. Many of those people, of course, are his fellow tribesman.

The inevitable reaction by American whites will not be Zionism, but some form of pro-white identity politics.

The Z Man is a dissident blogger. You can support his work at SubscribeStar.