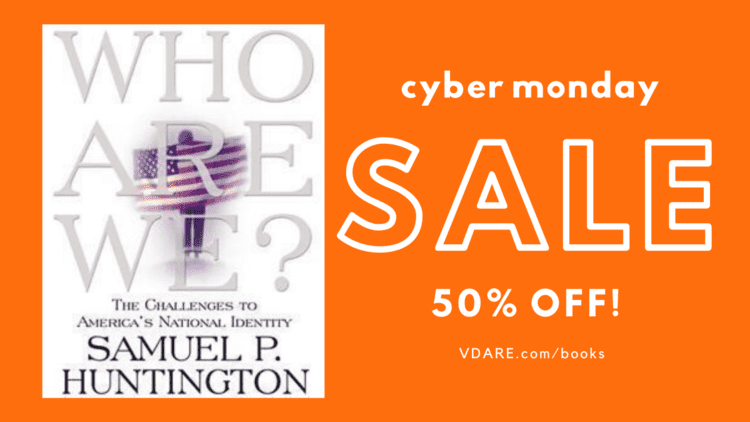 To celebrate Cyber Monday, VDARE is offering Samuel Huntington's book Who Are We? at 50 percent off!

Head over to the VDARE Book Store and check out all of our excellent books, all of which make perfect Christmas gifts and stocking stuffers!

In his seminal work The Clash of Civilizations and the Remaking of World Order, Samuel Huntington argued provocatively and presciently that with the end of the cold war, “civilizations” were replacing ideologies as the new fault lines in international politics.

Then in his controversial next work, Who Are We?, Huntington focused on an identity crisis closer to home as he examined the impact other civilizations and their values are having on our own country.

America was founded by British settlers who brought with them a distinct culture, said Huntington, including the English language, Protestant values, individualism, religious commitment, and respect for law. The waves of immigrants that later came to the United States gradually accepted these values and assimilated into America's Anglo-Protestant culture. More recently, however, our national identity has been eroded by the problems of assimilating massive numbers of primarily Hispanic immigrants and challenged by issues such as bilingualism, multiculturalism, the devaluation of citizenship, and the “denationalization” of American elites.

September 11 brought a revival of American patriotism and a renewal of American identity, but this revival has evaporated. Huntington argued the need for us to reassert the core values that make us Americans.