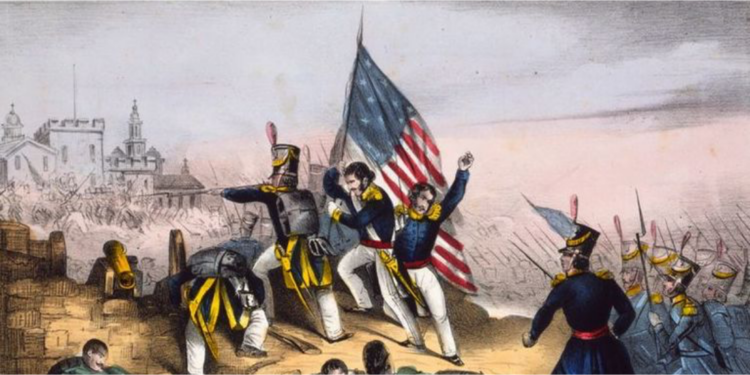 Enough Already About the Mexican-American War!

Last month, during my morning English as a Second Language class, I had an unusually spirited conversation with one of the handful of people who showed up. (Early January is the rainy, foggy and cold season here in California's San Joaquin Valley. And that translates to sparse attendance at the Lodi Adult School.)

Gustava…as I will call her…is one of the better pupils that I have had in my two decades of teaching ESL.

By that I mean that she attends most days, brings a dictionary, speaks above average English for an English language learner, participates actively in the classroom and has a measurable interest not only in the immediate subject matter but also in the broader picture of life in America.

For lack of a better word, I will say that Gustava is "aware."

On this particular bleak day, the class was thumbing through the Lodi News-Sentinel chatting about current events when we came across the inevitable daily story about casualties in Iraq.

"That's the thing about the American government…always interfering in other countries. Always fighting and killing people to get its own way," said Gustava.

And within the next few seconds, Gustava took a 160-year step back in time—to the Mexican-American War and the "stolen land" theme.

The Mexican-American War and its consequences are alive and well in the heart of every Mexican student I have ever taught. The only variable is how close to the surface it has bubbled.

A few grudgingly admit the war is ancient history. For the majority, however, it could have happened yesterday.

In Gustava's case, she is still riled up. To her credit, she laid a good share of the blame on the failures of the corrupt Mexican leader, Antonio Lopez de Santa Anna.

(If you want to hear the harshest possible assessment of Mexican corruption, don't talk to an American immigration reform advocate—ask any Mexican.)

But ultimately, Gustava pointed her finger at Yankee Imperialism.

While it is impossible to deny that the United States was not in a land gobbling mode during the years surrounding the Mexican-American War—Manifest Destiny, remember—what's much more interesting to analyze is the mentality that will not let go of a war fought and lost more than 150 years ago.

Here are a few questions that run through my mind every time someone tells me that America stole land from Mexico.

Only the Mexicans cling to their distorted view of the distant past…and bring it up at every opportunity.

Here's a suggestion to Mexicans on either side of the border who are still in a huff over the outcome of the Mexican-American war: chill out… tienes  que relajar.

And may I, at the same time, extend an invitation to those of you griping about a land grab to join the rest of us in the 21st Century?