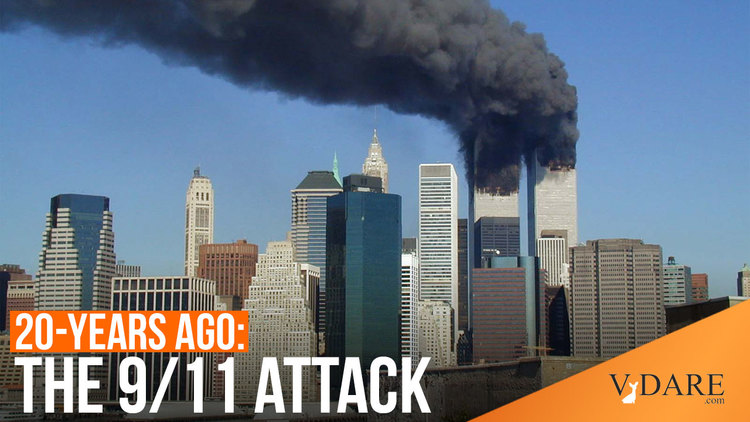 One point I politely refrained from making 20 years ago: Why was the president of the United States reading “The Pet Goat” to a class of second-graders at the moment our nation was attacked?

But that column didn’t make the cut. In 2007, the magnificent Gallics made Nicolas Sarkozy the new president of France, and now we’re friends again.

Finally, for the sub-literate: After the defeat of Japan in World War II, Gen. Douglas MacArthur, leader of the occupation, put out a call to American Christians: “Send missionaries and Bibles!” Thousands of missionaries poured in. The same thing happened after the Korean War, with greater success than in Japan.

On this point, there was surprising unanimity. Even President Truman agreed with his nemesis MacArthur, who said: “[Democracy] will endure when it rests firmly on the Christian conception of the individual and society.”

Today, not even a Republican would say that. Good luck, America!

[T]he nation has been invaded by a fanatical, murderous cult. And we welcome them. We are so good and so pure we would never engage in discriminatory racial or “religious” profiling. People who want our country destroyed live here, work for our airlines, and are submitted to the exact same airport shakedown as a lumberman from Idaho. This would be like having the Wehrmacht immigrate to America and work for our airlines during World War II. Except the Wehrmacht was not so bloodthirsty.

“All of our lives” don’t need to change, as they keep prattling on TV. Every single time there is a terrorist attack—or a plane crashes because of pilot error—Americans allow their rights to be contracted for no purpose whatsoever.

The airport kabuki theater of magnetometers, asinine questions about whether passengers “packed their own bags” … somehow allowed over a dozen armed hijackers to board four American planes almost simultaneously on Bloody Tuesday. Did those fabulous security procedures stop a single hijacker anyplace in America that day?

Airports scrupulously apply the same laughably ineffective airport harassment to Suzy Chapstick as to Muslim hijackers. It is preposterous to assume every passenger is a potential crazed homicidal maniac.

We know who the homicidal maniacs are. They are the ones cheering and dancing right now. We should invade their countries, kill their leaders and convert them to Christianity. We weren’t punctilious about locating and punishing only Hitler and his top officers. We carpet-bombed German cities; we killed civilians. That’s war. And this is war.

After the World Trade Center was bombed by Islamic fundamentalists in 1993, the country quickly chalked it up to a zany one-time attack and five minutes later decided we were all safe again. We weren’t. We aren’t now …

Congress has authority to pass a law tomorrow requiring aliens from suspect countries to leave. As far as the Constitution is concerned, aliens, which is to say non-citizens, are here at this country’s pleasure …

[T]he very nature of the enemy is that they have infiltrated this country and pass themselves off as law-abiding, peaceful immigrants. Their modus operandi is to smuggle mass murderers to our shores. But the country refuses to respond rationally. Rather, Congress is busily contemplating a series of “anti-terrorism” measures most notable for their utter irrelevance to the threat. …

Sen. Joe Biden, D-Del., has proposed that we take the aggressive step of asking aliens in the country to register periodically with the government so we know where they are. That’s already the law in Germany. Several of the hijackers in this attack lived in Hamburg, and they obediently complied.

The mastermind of the most vicious terrorist attack in the history of the world, Mohamed Atta, was in Florida on a “vocational status” visa—in order to attend flight school. Let’s say Atta had registered. Now what, Joe?

The reason liberals prefer a park to luminous skyscrapers [on the site of the World Trade Center] is that they are not angry. Liberals express sympathy for the victims, but they’re not angry. Instead of longing to crush and humiliate the enemy, they believe true patriotism consists of redoubled efforts to expand the welfare state.

Meanwhile, the construction workers clearing away the rubble vowed they would work without pay to rebuild the World Trade Center. Of course, now that we have 14 cows, that shouldn’t be necessary. (In a genuinely touching story, a tiny cow-herding village in Kenya only recently got word of the attack on America and, this week, made a special present of 14 cows to the United States.)

The attack on the World Trade Center ripped America’s soul not only for the thousands of lives it snuffed out. Even if the towers had been empty, the destruction of those buildings would have been heart-wrenching. Skyscrapers are the hallmark of civilization, monuments to human brilliance and creativity. …

Mohamed Atta loathed skyscrapers. Newsweek reported that he viewed the emergence of tall buildings in Egypt as an odious surrender to Western values. The most fitting memorial to the victims of the World Trade Center attack is to build the most breathtaking skyscraper in the world on top of Mohamed Atta’s corpse.

In their enthusiasm to bash the Bush administration for its handling of the war—which Democrats consider an annoying distraction from the real business of government, which is redistributing income—the left has embraced FBI agent Coleen Rowley as a modern Joan of Arc …

[Specifically] she condemned FBI brass for refusing to authorize a search warrant for Moussaoui based on the following information: 1) he refused to consent to a search of his computer; 2) he was in flight school; 3) he had overstayed his visa; and 4) he was a Muslim.
Let’s see, which of these factors constitutes probable cause?

I happen to agree with her, but liberals don’t. So how did Rowley become the left’s new Norma Rae? … FBI headquarters rebuffed Rowley’s callous insensitivity to Muslims and denied a warrant request to search Moussaoui’s computer—and thus failed to uncover the September 11 plot.

The FBI allowed thousands of Americans to be slaughtered on the altar of political correctness. What more could liberals ask for?