Remembering The Amy Biehl Story: #WakandaIsntReal, But The Depths And Depravity Of White Guilt Are All Too Real 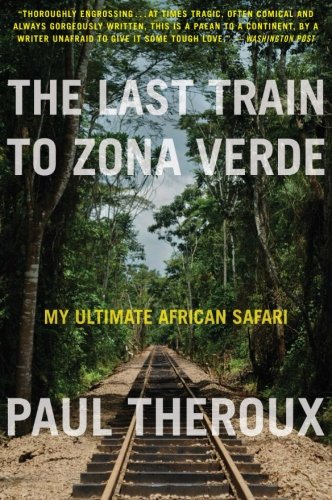 The Last Train to Zone Verde: My Ultimate African Safari is a must read (as is this incredible review of the book I subconsciously remembered when trying to find a good book on the Africa written by white man).

In this book, detailing an aging  septuagenarian’s wanderings throughout a liberated African continent (mercifully free from the vise of white colonialism and imbued with black power), Theroux writes of his trip to see the township where Amy Biehl—the white anti-apartheid activist—was murdered. 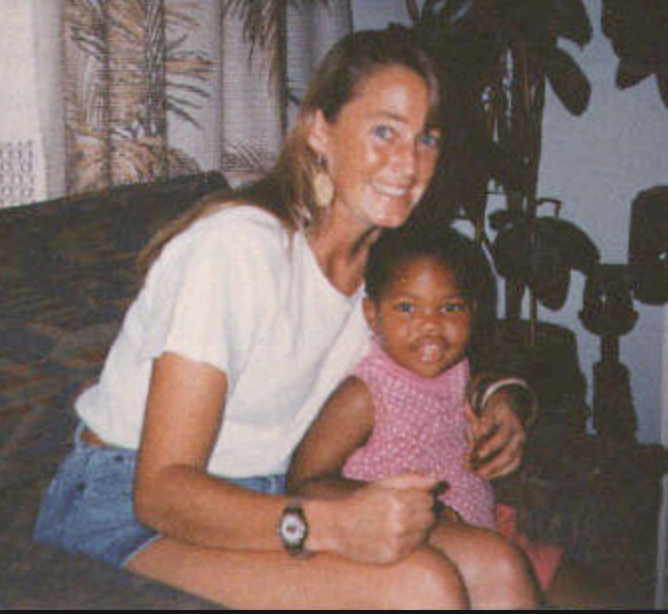 It's an incredible read, reprinted in full for you to truly grasp the horror of Africa and a world where whiteness itself is a death sentence:

Ten years before, I had walked around Guguletu, noting how the township had achieved notoriety in 1993, when a twenty-six-year-old Californian, Amy Biehl, had been murdered there by a mob. A Stanford graduate, living in South Africa as a volunteer in voter registration for the following year’s free election, she had driven three African friends home to the township as a favor. She had a ticket to California; she was to leave South Africa the next day. Seeing her white face, a large crowd of African boys screamed in eagerness, for this was a black township and she was white prey. The car was stoned, she was dragged from it, and though her friends pleaded with them to spare her (“She’s a comrade!”), Amy was beaten to the ground, her head smashed with a brick, and she was stabbed in the heart.

“Killed like an animal,” I wrote in my notebook then.

Four suspects were named; they were tried and convicted of the murder, and the judge, noting that they “showed no remorse,” sentenced them to eighteen years in prison. Three years later, these murderers appeared before the Truth and Reconciliation Commission. They had an explanation for the murder. “Their motive was political and not racial.” They “regretted” what they had done. They newly claimed they had “remorse.” They pleaded to be released under the general amnesty.

Everything they said seemed to me lame and baseless, yet they were freed because Amy’s parents, Peter and Linda Biehl, had flown from California, attended their hearing, and listened to their testimony. They said that their daughter would have wanted a show of mercy, since she was “on the side of the people who killed her.”

The Biehls did not oppose the murderers’ being released from prison.

So the killers waltzed away, and two of them, Ntombeko Peni and Easy Nofomela, were — astonishingly — given jobs by the Biehls, working as salaried employees for the Amy Biehl Foundation, a charity started by Amy’s forgiving parents in their daughter’s memory. Around the time I visited, the foundation had received almost $2 million from the U.S. Agency for International Development for being “dedicated to people who are oppressed.”

In 2001, a small cross had been placed near the gas station where Amy had been murdered, and on a crude signboard behind the cross was daubed AMY BIHLS LAST HOME SECTION 3 GUGS — misspelled and so crude as to be insulting.

Now I said to Phaks, “Take me there.”

The gas station was bigger and brighter than before. A new memorial, of black marble, much like a gravestone, had been placed on the roadside in front of it, on the fatal spot.

AMY BIEHL26 APRIL 1967 — 25 AUGUST 1993 KILLED IN AN ACT OF POLITICAL VIOLENCE.AMY WAS A FULBRIGHT SCHOLAR AND TIRELESS HUMAN RIGHTS ACTIVIST. 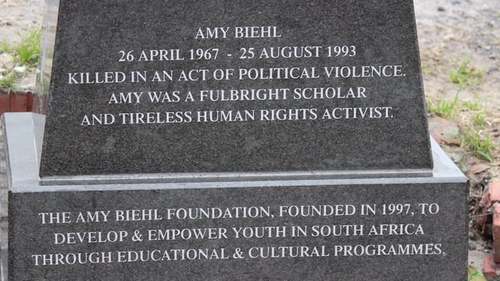 “They killed her right there,” I said. Phaks grunted, and we drove away. The wording bothered me. “What is ‘an act of political violence’?”

“Those boys, they had a philosophy.”

“Africa for Africans — it was their thinking.”

“That’s not a philosophy. It’s racism.”

“But they were political.”

“No. They killed her because she was white.”

“They thought she was a settler.”

He had told me that one of the chants at the time had been “One settler, one bullet.”

“But South Africa was full of white people who were part of the struggle. They supported Mandela, they went to jail. Whites!”

“But those boys said they were sorry,” Phaks said. “They apologized to the Truth and Reconciliation Commission. And her parents, they agreed.”

“But what do you think her parents really felt?”

“I don’t know. But you can see, they got their name there.”

“And getting their name there makes up for the murder of their child?”

“It was political. The parents, they hired the boys to work for them,” Phaks said, and now I could see he was rattled, because he was driving badly along the busy broken township roads, muttering at the traffic, the oncoming cars cutting him off.

“Phaks, do you have children?”

He nodded — he knew what I was going to say.

“What would you do if someone beat your daughter to the ground and took a brick and smashed it against her head? Then stabbed her in the heart and left her to die?” He winced but remained silent. “Would you say, ‘That’s their philosophy. It’s a political act’?”

“What would you think?”

“Myself, I wouldn’t accept.”

“What if they said sorry?”

Phaks was very upset now, so I shut up and let him drive, but he was still fretful from my badgering him and kept murmuring, “No, no. I can’t. Never, never.”

The Amy Biehl Foundation had been founded to promote peace and mutual understanding. It had also been instrumental in improving the infrastructure of Guguletu — upgrading huts and bringing in utilities. Doing that was easier than peacemaking. According to data collected by the South African Institute of Race Relations, more than seven hundred people were murdered in Guguletu between 2005 and 2010. This amounted to one murder every two and a half days over those five years. [p. 33 -35]

#WakandaIsntReal, but Africans murdering a white woman—who was entirely dedicated to advancing black power—purely because she was a white woman is a reality Amy Biehl's parents faced.

They in turn forgave her black murderers, hired them to work in a foundation named for their murdered daughter, and dedicated their lives to advancing black power.

#WakandaIsntReal, but the depths and depravity of white guilt are all too real.