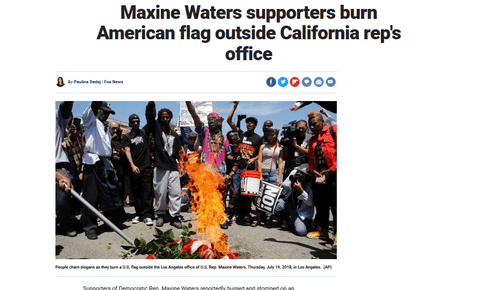 Can The Democrats Fake Patriotism Long Enough To Get Re-Elected? Not If They Can't Refrain From Burning The American Flag!

In the wake of President Trump's summit with President Putin of Russia, the journalists and their pet Democrat politicans are trying to use jingoism for political advantage, claiming the Commander in Chief is weak when it comes to dealing with The Bear. The problem of course is that the Democrat base can never really pull off patriotism convincingly. Thus, supporters of Maxine Waters, the unhinged congresswoman eagerly promoted by celebrities and journalists, can't even keep themselves from burning the American flag.

Supporters of Democratic Rep. Maxine Waters reportedly burned and stomped on an American flag they snatched off a pickup truck Thursday, while chanting "Black power" outside her California office.

The demonstrators showed up with the intent of countering a planned protest from a far-right group.

That group, the Oath Keepers, had said they would rally against the congresswoman they call a "protest terrorist inciter" early Thursday afternoon, prompting counterprotesters to rally in support of Waters. But the Oath Keepers did not arrive, the Los Angeles Times reported.

Some demonstrators chanted, “Black power,” while other held signs that read, “Resist!”

At some point during the protest, a vehicle with an American flag on the back approached and was stopped by the crowd.

Some protesters opened the car doors while others grabbed the flag as the vehicle drove off.

The flag was then stepped on and set ablaze as someone stoked the flames. A few people cheered and someone yelled, "This is not the American flag, this is their flag."

No one was injured and police made no arrests.

Needless to say, Waters condemend the Oath Keepers, blaming them for inflaming racial tension. Again, burning the American flag "inflames" many Americans, but whites are supposed to sit there and take it, not emotionally react to endless provocations.

Fox News is commonly regarded as a conservative leaning news source, but notice how the Oath Keepers are described as "far right," even though the Oath Keepers have gone out of their way to loudly proclaim their anti-racism.

It's also significant that this account suggests there was an actual crime, with people storming a car and trying to get in, and then stealing a flag and destroying it. Needless to say, if the person in the car had driven off in self-defense and someone had been hit, we'd be reading hysterical media accounts about a "far right terrorist" waging vehicular assault. There were no arrests because, as we learned from the dismissal of most of the charges against those allegedly involved in the Inauguration Day riots, being a leftist means you don't have to obey the law.

The chant "2-4-6-8, America was never great" and the "Revolution, Nothing Less" shirts show that members of the Revolutionary Communist Party, a strange, cult-like far-left faction, was involved in this protest. One would think this would be worth reporting, but journalists have a long history of pretending not to notice exactly who is involved in left wing protests.