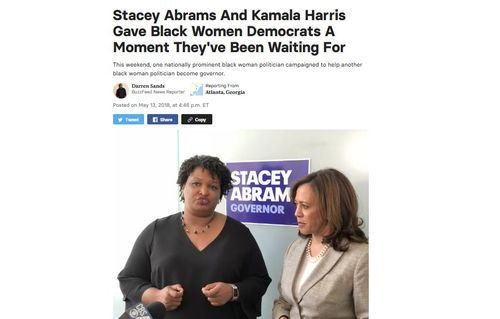 Two black women are clearly being fast-tracked by Democrats and their Main Stream Media adjunct (or is it the other way around?): Georgia’s sore-loser gubernatorial candidate Stacey Abrams, who was just chosen to respond to President Trump’s State of the Union address, and Kamala Harris, who has just declared for President despite being first elected U.S. Senator from California only in 2016. But whatever their political legacies, it’s a little-discussed fact that neither will have genetic legacies: Abrams, 45, is unmarried; Harris, 54, has only step-children, via her Jewish attorney husband Douglass Emhoff. Science suggests this has implications—probably negative.

Abrams’ and Harris’ childlessness is not actually a surprise. They are fairly intelligent women—even adjusting for an Affirmative Action boost to their college careers—and intelligent black women seem particularly averse to having children. British psychologist Richard Lynn noted in his book Dysgenics that the negative correlation between fertility and IQ among white American women is 0.06, but among African American women it is 0.22. Possibly this is because women sexually select for status and there are relatively few black men of high status—meaning they (unsuccessfully) hold out for one until it’s too late.

Nevertheless, neither Abrams or Harris will live on, in the way that is central to life on Earth and the fundamental purpose of all organisms, after they die. It might even be said that they are failures as organisms. Can they understand something—biological parenthood—that is so fundamental to the lives of most of those whom they desire to govern?

The problem began to be discussed a few years ago in Europe, when the childless Theresa May became British Prime Minister at the same time that the Scottish First Minister was a woman without children, as was the Swiss President and the powerful German Chancellor.[Europe’s Childless Leaders Sleepwalking Us to Disaster, By Giulio Meotti, Gatestone Institute, May 6, 2017]

John Derbyshire wrote in May, 2017 that

In July 2016, Andrea Leadsom, a candidate in Britain’s Conservative Party leadership race, was maneuvered by a hostile journalist into remarking that that her opponent, the now-Prime Minister Theresa May,

…possibly has nieces, nephews, lots of people…But I have children who are going to have children who will directly be a part of what happens next…Genuinely, I feel that being a mum means you have a very real stake in the future of our country, a tangible stake”.

[Andrea Leadsom is in hot water for saying she should be prime minister because she's a mother, The Journal, July 9, 2016]

Leadson’s remark was met with precisely the kind of righteous outrage that ridiculous statements are never met with, but that true yet unpleasant statements usually are. There was the raw emotion that is the essence of cognitive dissonance: someone has said something you, on some level, know to be true, but which you’re so desperate that it is not that you’ve convinced yourself otherwise.

“I’m gay and in a civil partnership. No children, but 10 nieces and nephews. Do I not have a stake in the future of the country? Vile.” said Conservative MP Sir Alan Duncan.

“I am childless. I have nieces and nephews. I believe I—like everybody else—have a very real stake in our country” said lesbian Scottish Conservative leader Ruth Davidson. [Furious row as Andrea Leadsom suggests motherhood sets her apart from childless Tory PM rival Theresa May, By Sam Ralph, The Mirror July 8, 2016]

(But Davidson apparently didn’t have a sufficient emotional, or evolutionarily, satisfying stake, because in October 2018, she gave birth to a son whom she intends to raise with her lesbian partner—Ruth Davidson gives birth to baby boy, By Severin Carrell, The Guardian, October 26, 2018).

As human beings are pack animals, it is a slight oversimplification to claim that a childless person is “a failure as an organism.” This must be caveated with “unless this person very heavily invests in his kin or inspires his group towards or helps to create for his group greater genetic fitness in some way.”

Evolution can operate on many levels. Some childless people pass on their genes indirectly by strongly investing in nephews and nieces. But this is by no means true—based on empirical research—of the majority of “homosexual uncles,” for example [The "Johnny Depp Effect"—An evolutionary explanation for homosexuality, By Kayla Causey and Aaron Goetz, Psychology Today, June 10, 2009]

Equally, as has been shown in by Australian anthropologist Frank Salter in his book On Genetic Interests, some childless people—even if they don’t invest in nephews and nieces—will operate at the level of their ethnic group, which genetic assay data proves is an extended genetic family.

Thus Edward Dutton and Michael Woodley of Menie argue in their book At Our Wits’ End that groups that survive the Darwinian battle will tend to have a childless caste, because such a caste gives the group an evolutionary advantage. For example, shamans, priests and even scientific geniuses (who are disproportionally childless) can inspire the group in an evolutionarily adaptive direction or invent something that permits it to expand.

Unfortunately, however, the recent wave of childless European leaders presiding over governments that allowed the Third World invasion of Europe, and which inculcate children with non-traditional (and thus maladaptive) values, are indeed “failures as organisms.” These leaders have no “very real stake in the future of our country” and they can be expected, at best, to be motivated by a desire simply for personal wealth and power.

In fact, you’d predict that they—and thus Harris and Abrams—would be a certain specific psychological type.

Voluntary childlessness is predicted by being low in the personality trait “Agreeableness.” This is a combination of altruism and, crucially, empathy.

In other words, compared to those who have or desire children, the childless are selfish and they have problems understanding the feelings of others.

This is hardly a recipe for a president who is going to act in the interests of the American people. It is, instead, a personality type which will lead to self-aggrandizement, corruption, high self-esteem, imperviousness to criticism; and to policies which—lacking in empathy—will have ultimately terrible consequences.

The confirmed childless are also lower in Extraversion (so less sociable, lower in enjoyment), more politically liberal and less religious. [Personality and Voluntary Childlessness, by Margaret Avison and Adrian Furnham, Journal of Population Research, 2015] And religiousness, remember, generally predicts ethnocentrism and other evolutionarily adaptive behaviors. [When religion makes it worse. By Y. Sela et al., The Attraction of Religion, 2015]

Interestingly, even involuntary childlessness among women is significantly associated with low Agreeableness. Specifically, being unable to have children at all despite wanting them—as opposed to secondary infertility—is correlated with Narcissism. [Psychological profile of women with infertility: A comparative study, By Shuvabrata Podar et al., Industrial Psychiatry Journal, 2014] This is presumably because, as Michael Woodley of Menie has shown, mental and physical problems tend to be comorbid, as they are both underpinned by an elevated level of mutant genes. [Social Epistasis Amplifies the Fitness Costs of Deleterious Mutations, Engendering Rapid Fitness Decline Among Modernized Populations, By Michael Woodley of Menie et al., Evolutionary Psychological Science, 2017]

Narcissism, which is characterized, among other traits, by self-importance, fantasies of success, entitlement, exploitative behavior, and a belief that one is special, has been found to be very high among politicians. [Narcissism: Why It's So Rampant in Politics, By Leon F Seltzer Ph.D., Psychology Today, December 21, 2011] Perhaps this is why so many of Europe’s leaders are childless.

The leading cause of female infertility in the USA is endometriosis. This is comorbid with Borderline Personality Disorder [Borderline personality disorder and polycystic ovary syndrome, By R. Tan et al., Australia and New Zealand Journal of Psychiatry, 2017], a condition marked by anxiety, disturbed patterns of thinking and being highly impulsive. This may be because the pain of the condition affects personality; or because, for some genetic reason, the traits come together. Lena Dunham is an endometriosis sufferer.

Infertility—whether voluntary or involuntary—is a very sad and extremely sensitive subject. But the presidency of the USA is too important for us to be concerned about hurt feelings.

Although there are exceptions to the rule, childless women tend to be intelligent Narcissists or intelligent but lacking in empathy and altruism. This is not a particularly good qualification for sitting in the Oval Office.