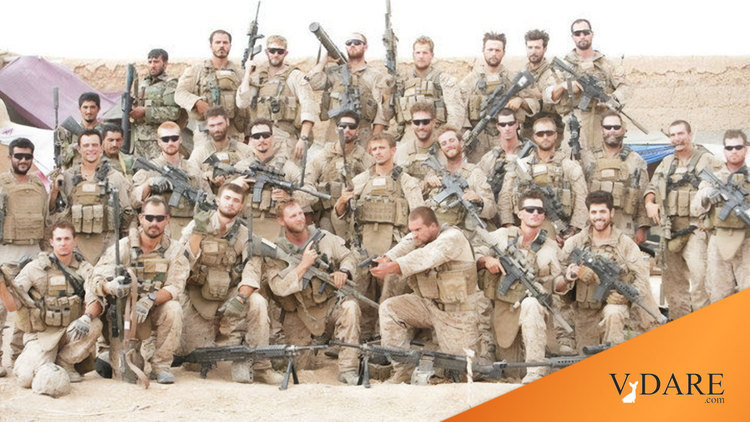 Whites Made Up 85% of US Soldiers Who Died in Afghanistan

Earlier: Woke Purge Of U.S. Armed Forces Underway—But How Will They Fight Their MidEast Wars Without Whites? This is from Congressional Research Service:

Operation Enduring Freedom (OEF) is the war in Afghanistan.

Note: By the way, the very low percentage for Hispanics has me worried that the military might be counting Hispanics different from the way most of the federal government counts Hispanics, rather like lots of police departments are out of sync with the now standard way which is to treat Hispanic ethnicity as overruling race. Maybe the military is only counting as Hispanic people who don’t put down a different race such as white or black?

So that 85% white figure might include some Hispanics who identify as racially white.

In Iraq, whites made up 82.6% of the dead American soldiers:

As Ibram X. Kendi taught us, when there exist racial gaps, there is proof of racism.

I’ve been covering these stats at iSteve for approaching 15 years now. For some reason, not to many other outlets have found them of interest.

But that’s why you read me.

To do what I do, I need to make a living off it. You’ve generously enabled me to to that for many years now. So, I gratefully come to you once again.

Thanks to everybody so far who has donated to my August iSteve fundraiser.

Large or small, I find each donation to be a personal message of encouragement to keep doing what I’m doing. I more or less figured out the basic logic of the 21st Century, which hasn’t made me popular, but with your support I can keep on keeping on pointing out how the world works.

Here are eight ways for you to contribute:

Donate at Unz.com (The links wouldn't work if we embedded them here )