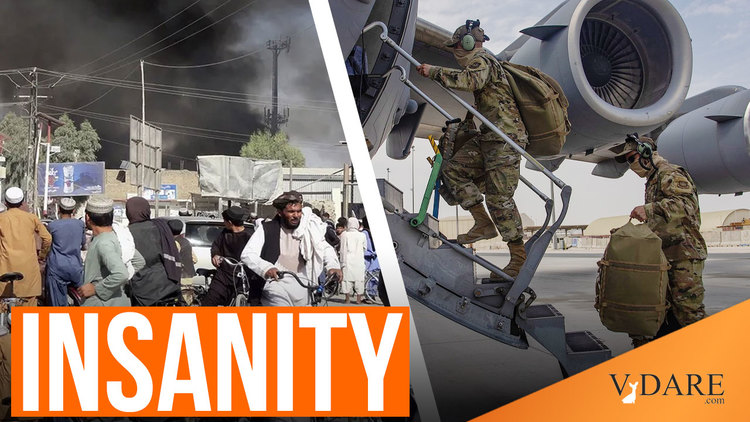 We are now out of Afghanistan. This is such a relief after twenty years of futility, Joe Biden has been getting thanks from some surprising people—Ann Coulter and Richard Spencer, for example.

I'm as glad as they are. But I think the appalling mess Biden's people made of the evacuation cancels out any gratitude due to the president. When the Soviet Union, on its last geriatric legs, made a cleaner, cheaper show of withdrawing from Afghanistan in defeat than we have, heads should roll.

A basic atom bomb depends on a mass of nuclear material going into a spontaneous fission reaction. You put two or more subcritical masses into some device, keeping them apart from each other. Then, when you want an explosion, you bring them together to form a critical mass. Bang!

Similarly, the current mess is the result of two subcritical masses of insanity coming together:

Our foreign policy insanity—these dumb missionary wars we keep getting involved with—has been a constant for decades now. It's possible we have finally learned our lesson; but I seriously doubt it. I look forward to milking that insanity for commentary as long as I can work a keyboard.

So let's see what this week has shown us about our immigration insanity. The focus of concern: the floods of Afghans we have taken in.

The original idea, which seemed reasonable (at any rate to me) was that we should take in and settle Afghans who had trustingly put their lives on the line to help us advance our foreign policy, as insane as that policy was. That would be a fair and decent thing to do.

As it's worked out, though, none but a small proportion of the tens of thousands of Afghans we've brought in belong to that category. Most are just random Afghans who got to Kabul airport and bribed or elbowed or threatened their way onto a plane. Far from owning Special Immigrant Visa (SIV) papers to show they have at least claimed to have helped us, many have no papers at all.

Meanwhile, Afghans who are SIV applicants but could not make it to Kabul, are being hunted down and killed by the Taliban. Moral of the story: Put no trust in the U.S.A.

Ann Corcoran has noted that most of the incoming Afghans are likely being admitted on parole, not as refugees. What does "on parole" mean? If you follow Ann's link to the Homeland Security Today website, you get this:

If you have been following immigration issues these past few years you will be rolling on the floor laughing at that. As Michelle Malkin says in regard to judgements and appeals in our immigration courts: "It ain't over until the alien wins."

With the two million or so illegals coming in across our southern border every year now and our immigration-control apparatus totally overwhelmed and demoralized, this will be more true than ever.

And our immigration insanity only starts there. It proceeds through the lunacies of Birthright Citizenship and unrestricted Chain Migration to a sort of generalized version of Michelle's apothegm:

"It ain't over until the alien, and all his offspring and relatives, and anyone who can buy fake papers in the local bazaar 'proving' he is a relative, win."

Stateside, meanwhile, odds are we have just acquired a big new set of social problems we could very well have done without.

Afghanistan has a mean national IQ variously estimated as from 80 to 84. This is likely related to extraordinary levels of inbreeding.

Quote from a study published 2012 in the Journal of Biosocial Science:

And they are all Muslims—devout adherents of a faith not best known for its readiness to assimilate to non-Muslim host cultures … to put it mildly.

As James Kirkpatrick has documented, these Afghans will be settled in small towns in Red States as much as possible.

Twitter is full of people asking why they can't be settled in Malibu or Martha's Vineyard. Stephen Miller and Tucker Carlson discussed it on Fox News:

Another common suggestion—I've suggested it myself—is that these Afghans who don't want to live in Afghanistan should be relocated in neighboring ‘Stans, with which many of them have ethnic links. Any news on that?

Well, Tajikistan has an 835-mile border with Afghanistan's northeast. Back in July they said they'd take in 100,000 Afghans—pretty generous, for a country of less than ten million. However, they now seem now to be backing out from that on the grounds they don't have the infrastructure [Tajikistan Can't Afford to Take in Afghan Refugees Without Help -Police Chief, Reuters, September 2, 2021].

What most likely happened is that Russia, which in Soviet times controlled Tajikistan as part of its Central Asian mini-empire, and which is still in military alliance with Tajikistan, is worried about security risks from Islamic militants. So Russia cracked the whip and Tajikistan jumped.

Related somehow, although I can't figure out how, is this story on Wednesday from Reuters:

The United States will help build new facilities for border guards in Tajikistan along the Central Asian country's frontier with Afghanistan and Uzbekistan to better respond to security threats, the U.S embassy in Dushanbe [Tajikistan's capital] said on Wednesday.

The new facility, which will be built in Tajikistan's southwestern tip, will replace an outdated detachment and allow border guards to "deploy forces more quickly to border areas in response to threats," the embassy said.

Well, isn't that special! We're building border facilities up in the Pamir mountains of Central Asia, "to better respond to security threats."

A U.S. Border Patrol source in Texas saw this & just texted me: “This is a slap in the face to us.”https://t.co/dcP81SbwoV

What a good thing there are no security threats on our borders!

Oh, and what about those American citizens we hear are stranded in Afghanistan? What were they doing there?

We haven't been given much detail about them, but Tamar Lapin in the New York Post on August 19th did describe ten cases of people left behind. Of the ten, only three are identified as U.S. citizens. Their names: Faziya Nematy, Salma Kazemi, Tahir Luddin [These are just some of the thousands of Americans, allies trapped in Afghanistan].

So these are U.S. citizens of Afghan origins. That doesn't subtract anything from their citizenship, and we should do all we can to get them out. We are not much of a country if we can't take care of our own citizens.

This sentiment would be considerably reinforced, though, if we could hear about some stranded U.S. citizens who are not of Afghan origin or ancestry.

The other seven of the New York Post ten are noncitizens in the category of people we know helped us, or the families thereof. We should do what we can for them, too…but citizens first.

Footnote: Mark Twain said that man is the only animal that blushes…or needs to. I blush a little when this topic of taking in Afghans comes up. Why? Well, here I was in the June 25th podcast:

Are we honor bound to take in these tens of thousands, perhaps eventually hundreds of thousands, of Afghans? Podcasting here on an immigration-restrictionist website, it pains me to say it, but I think we are.

Look on it as the price of our own stupidity. It's not the fault of Afghans that our leaders chose their country as a test site for our World Saver fantasies.

We could have flattened Afghanistan by Christmas 2001, then pulled out, leaving a note on the door saying: "Don't mess with the U.S." Instead we went for the nation-building flapdoodle, and squandered untold trillions of dollars and more than two thousand precious American lives to give the world a lesson in futility.

If we had the spirit of our ancestors we'd be hanging politicians from utility poles all up and down Pennsylvania Avenue.

What was I thinking? Well, I was thinking that we have to pay for our blunders. God knows, I've always paid for mine. You do the crime, you do the time; you broke it, you buy it; and that applies to nations as much as to individuals—or, in my opinion, it ought to.

There are some obvious rejoinders you can make, and listeners have not hesitated to make them.

I wasn't thinking about the utter, colossal stupidity, incompetence, and in some cases treachery, of our Ruling Classes and the federal apparatus they supervise.

Look, I'm an immigrant—American by choice. I still carry some of that immigrant admiration, reverence even, for the U.S.A. The shine hasn't altogether worn off.

Perhaps it never does. As cynical as I temperamentally am, I can never be as cynical as an American native.

Oh, and concerning the last sentence in that quote from the June 25th podcast, the one about hanging politicians from utility poles: If someone can get the party going, I'm definitely in.