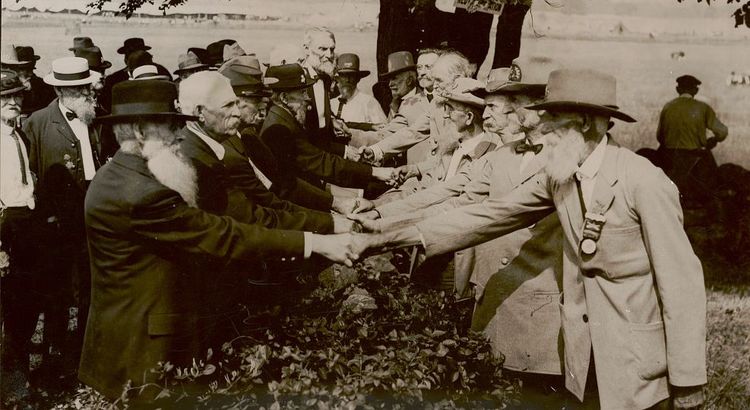 Above, at a 1913 reunion, Union and Confederate veterans shake hands at the Angle on the field of Gettysburg.

You don't hear much these days about the war against the Confederate Flag, especially since the flag's enemies got their behinds kicked when they tried to remove a Confederate emblem from the Mississippi state flag through a state referendum last year. Nevertheless, don't imagine the enemies of the flag and the heritage it represents are gone; like termites, they do their work when you don't see them.

One major termite is historian David Brion Davis, probably the world's leading authority on the history of slavery and no friend of the American South. In recent years, Mr. Davis has been complaining that the South actually won the American Civil War after all, since, within a few years of Appomattox, both North and South were making up and the great crusade for Emancipation and Reconstruction (not to say Retribution) had been shelved. In the July 18 issue of the New York Review of Books, Mr. Davis, a professor emeritus at Yale, [send him email] returns to his theme. [“The Terrible Cost of Reconciliation” New York Review of Books, July 18, 2002]

Reviewing historian David Blight's recent (and multiple prize-winning) Race and Reunion, Mr. Davis tells us that Blight tries to explain “one of the most troubling questions for the understanding of American history: why it became accepted wisdom … that states' rights, not slavery, was the cause of the Civil War.”

Since conflict over states' rights was the major cause of the war, you can see why Mr. Davis finds the “question” “troubling.” Lincoln explicitly denied that he intended to free the slaves, and the Upper South seceded and the war began only when he mobilized troops for invasion.

Mr. Blight's answer to the troubling question seems to be that both Northerners and Southerners had other things to do and think about in the late 19th century than pushing the federal government into social and economic revolution along racial lines. One such better thing was to restore “sectional harmony” and forge a shared sense of national unity and identity that ignored racial issues and allowed Americans of both sections to live together.

Apparently, Mr. Davis and Mr. Blight regard this achievement as an immense blot on the national honor.

By 1913, the 50th anniversary of the Battle of Gettysburg, surviving veterans of both sides met amicably in their uniforms as “the ultimate triumph of national reconciliation at the African-Americans' expense.”

“Try to imagine German veterans, in full Nazi uniform, shaking hands in 1994 with American veterans in uniform at the beaches of Normandy,” urges Mr. Davis.

Actually, you don't have to imagine it; such meetings have occurred, and why shouldn't they?

Mr. Davis apparently believes that wars should continue forever, until the Good Guys wipe out the Bad Guys to the last man, but aside from that, he also assumes that the conflicts in the Civil War and those in World War II were largely the same.

For most Americans, North and South, then and now, they weren't, but for some, like Mr. Davis and the other professional foes of the South, they were. The Civil War to them was not simply a war between sectional interests or different views of the Constitution or different economic and cultural systems; it was a war to the death, the purpose of which was to extirpate evil—not just slavery but racial inequality specifically and inequality in general—from the face of the planet, to trample out the vintage where the grapes of wrath are stored.

For that kind of mind, war never ends, for the simple reason that what they think is so irredeemably evil is in fact part of human nature and the human condition.

The reaction against the war's hidden agenda for social and racial reconstruction, Mr. Davis writes, led eventually to “a Southern ideological victory” that lasted until the 1960s. Then the “civil rights movement” and the happy days of the Great Society descended upon us, and the crusade was in business.

The result to date has been the wreckage of most American cities, the entrenchment of a black underclass, forced busing and affirmative action, mass immigration from the Third World, and a generation of racial hatred, vituperation and resentment, as well as the eradication of most symbols of the Southern and Confederate heritage and the beginnings of a war against American and white culture generally.

Where the new crusade will end no one knows (least of all Mr. Davis), but some are starting to guess, and the future doesn't look much brighter.

One reason these crusades keep coming back is that the ideologues who incite them—like Mr. Davis—never have to live with their consequences.

The Americans, Northern or Southern, who actually had to fight the crusade and endure its aftermath did— which is one reason, fifty years later, those who survived were ready to shake hands and get on with what was left of their lives.