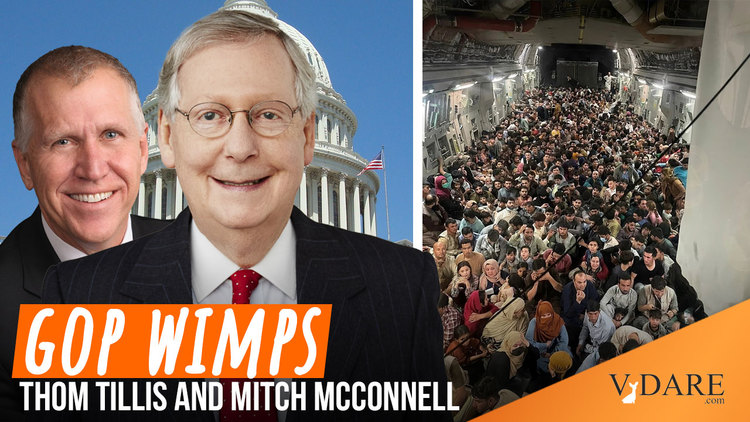 The Afghanistan War is over, and U.S. taxpayers are stuck with resettling the losers. The Biden Regime evacuated more than 120,000 people, only a few thousand of whom were American citizens. The rest were Afghans, thousands of them unvetted. Even if these “refugees” were allies, Europe’s experience with Afghans should persuade us to back away from resettlement. But our Ruling Class says otherwise. Uniparty lawmakers, Democrat and GOP wimps, want these migrants here, risk regardless. They are (not for the first time) WRONG.

The final tally we’ll take in is (ominously) unclear. President Biden said 50,000, but the number of evacuees so far belies that estimate [Biden administration working to accommodate 50,000 Afghans on military bases, Reuters, September 1, 2021]. One report says more than 40,000 more refugees await resettlement after the ones we’ve already taken in—already nearly 24,000 [23,876 ‘at risk’ Afghans have already arrived in the United States, by Christina Wilkie, CNBC, September 1, 2021].

And, unless another Western country agrees to accept excess refugees, they’re coming to America. Iran, Pakistan, and Turkey already have hundreds of thousands within their borders and don’t want more. The Gulf States don’t want them permanently [Afghan refugee flow raises concerns in Arab Gulf countries, The Arab Weekly, August 21, 2021].

And why would they? The American Ruling Class shows no opposition to importing our wonderful Afghan allies who couldn’t or wouldn’t fight for their own country.

The wimpish GOP Establishment response to this mounting crisis is epitomized by Senate Minority Leader Mitch McConnell. He claims to have no worries about the Afghans and would be thrilled if they moved into his own neighborhood [McConnell Says He'd Welcome Afghan Refugees to His Neighborhood, by Lisa Autry, WKU, September 2, 2021]. Of course, the Americans who actually will see them move into their neighborhoods won’t have a choice over the matter.

Another GOP wimp: North Carolina immigration enthusiast Sen. Thom Tillis. He even claims that we know with absolute certainty that these Afghans are great people and opposing their resettlement insults the service of American soldiers:

When you talk to the people that we've spoken with, when you look at their service record ... when you recognize that they sleep in the same tents, they carry arms together, they've been in live firefights, how dare anyone question whether or not they deserve to come to this country or to a safe third country?

We’re not talking about just walking down the street and picking and choosing people. We know these people. We know who their children are. We know what their service record was. And quite honestly, somebody taking that position, each and every time they do, is insulting a service member who considers these people like brothers and sisters

Tillis has apparently never noticed the steady toll of “Green on Blue” killings.

Prominent Republicans such as Donald Trump, Ted Cruz, and J.D. Vance are pushing back. But the Congressional consensus is more aligned with Tillis, Sasse, and McConnell.

These wimps are also wrong. They assert that the Afghans “refugees” are certified allies, meaning they have been vetted. That’s not really true. Ample evidence shows that the State Department issued blank visas to Afghans. Those could have easily been printed off and distributed to random Afghans and terrorists. As one security expert said:

When you provide blank visas without specific names already on them and without going through the vetting process, don’t be surprised when you end up with ISIS or al Qaeda showing up with those visas in hand

[US handed out blank copies of visas in Afghanistan, setting terrorists up: Ex-FBI agent, by Anna Giaritelli, Washington Examiner, August 29, 2021].

Thus NBC News reported that roughly 100 of the refugees accepted for resettlement were flagged for possible terror ties and at least two were sent back to the Middle East for additional screening [U.S. Plans to Send at Least Two Afghan Evacuees to Kosovo for Further Review, by Jonathan Dienst et al., September 3, 2021].

And those are just the ones we were able to catch with the scant information we have. Since the Taliban took over, there isn’t a solid way to obtain records in Afghanistan. Even before the takeover, the American-backed government didn’t keep great records. Most of the vetting is occurring with whatever we can find.

Not only that, but when Afghans fail vetting, we can’t deport them. Afghanistan certainly won’t take them, and the Middle Eastern countries where many are supposedly being vetted only agreed to host them temporarily. So our sclerotic bureaucracy will accept them because they don’t have a choice [Kabuki Vetting of Afghans, by Mark Krikorian, National Review, August 30, 2021].

Already, we’ve caught rapists and child sex traffickers. One Afghan who was deported from America in 2017 for a rape conviction returned to this country as an evacuee. Taxpayers must now foot the bill for his incarceration [Convicted Rapist Reached the U.S. On Afghan Evacuation Flight, by Stephen Dinan, Washington Times, August 30, 2021].

Several men brought along child brides. Authorities have no earthly idea what to do about it [U.S. investigates "child bride" cases among Afghan evacuees, Margaret Brennan and Bo Erickson, CBS News, September 3, 2021].

Much of the propaganda in support of the Afghan allies claims they received Special Immigrant Visas that shows they worked with American forces in the country. But in fact a significant number didn’t come on these visas. Republican Wisconsin Rep. Tom Tiffany (last mentioned on VDARE.com because of his heroic opposition to the anti-white Juneteenth scam) found that none of the thousands of Afghans housed at a military base in his state came to the U.S. on a SIV. All expect to receive immigration parole to stay in the country [Tom Tiffany raises security fears over 2,000 unvetted Afghan refugees, by Chris Jewer, Daily Mail, August 31, 2021].

And keep in mind that these Afghans are not, technically, “refugees,” as Ann Corcoran has observed. They are taken in either as SIVs or under special immigration parole. That means many are technically ineligible for government assistance and don’t receive the taxpayer support of normal refugees.

Which means, of course, that the Biden Regime and its legislative spear carriers are working to provide cash for these “migrants.” And the government will pay refugee charities over $2,000 for every single refugee they resettle. It’s a profitable business right now.

But it will not prove profitable for the small Americans towns forced to take these Afghans. Many are already apprehensive about cash-strapped schools having to teach kids who can’t speak English. One school district in Wisconsin that is slated to receive Afghans only has one ESL teacher and doesn’t have the money to hire more [Wisconsin Towns Await Influx of Afghans — And Wonder What It Will Mean, by Cleve R. Wootson Jr., Washington Post, August 28, 2021].

But a recent Yahoo News/YouGov poll found that support for resettlement has declined from 49 to 44 percent, while the number of Americans unsure about it jumped 7 points to 34 percent. Twenty-two percent of those polled outright oppose the resettlement. Significantly, among Republicans, 36 percent are uncertain about Afghan resettlement, while 32 percent support it and 31 percent oppose it [Poll: Republican support for Afghan refugees, by Caitlin Dickson, Yahoo, September 3, 2021].

Those numbers will likely grow as we hear more stories about the poor vetting, rapes, terror ties, child brides, and community issues such as school funding.

Afghan resettlement looks to be a major issue for 2022. Republicans should sound less like Thom Tillis and more like Tom Tiffany. Voters will not appreciate lawmakers settling Islamic terrorists with child brides in their neighborhoods.