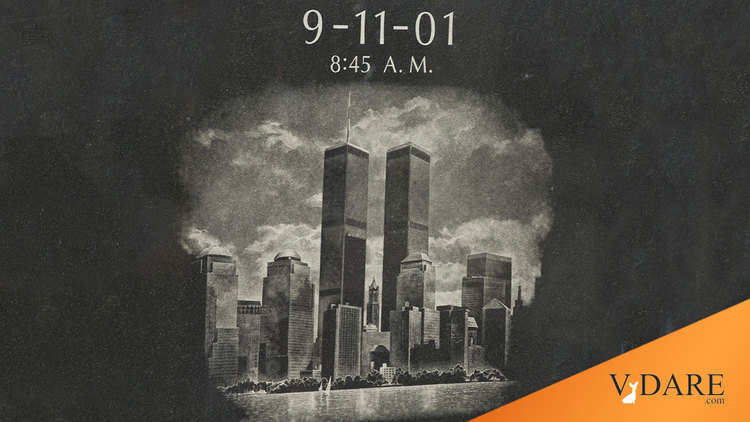 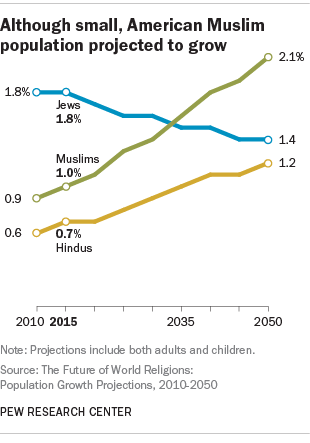 I wrote this in 2017, ten years after VDARE.com stopped memorializing 9/11 in 2007. My conclusion—"America's elites didn't really care. They just got on with their agenda(s)"—is confirmed by their equally treasonous reaction to the disaster of the Afghanistan withdrawal. (The Pew chart at right, included in my 2017 post, reminds us that there are more than twice as many Muslims in American than there were 20 years ago. )

..unlike chasing alleged terrorist leaders around Afghanistan with airborne missiles, immigration policy actually offers concrete ways in which America can be defended. The borders can be sealed. Illegals can be expelled. Alien enclaves can be assimilated. And the mounting destabilization of America's political order can be stopped—even reversed.

But our elites just didn't want to listen. So here we are.

VDARE.com stopped memorializing 9/11 in 2007. This year, I feel only obliged to add that the apparently intense official emotional response to 9/11 was perhaps the first example of the now-familiar pattern of extreme public lamentation over terrorist attacks designed to mask the Ruling Class's implacable determination to Elect A New People.

I suppose a whole generation will always remember where they were when they heard about 9/11, just as an earlier one never forgot where they were when they heard JFK had been shot. I was exactly where I am now, looking at a computer screen behind which, through the window, the Connecticut Berkshires roll away to the horizon, when I glanced at the TV and saw the World Trade Center in flames – just as I now see Mayor Bloomberg presiding over a remembrance ceremony.

The same eerie feeling of complete change and no change comes over me when I contemplate the political consequences of 9/11. Osama bin Laden, whose head could surely have been obtained through a traditional commercial transaction with one or other local warlord, remains irritatingly at large. The government of Afghanistan, taken from the majority tribe and given to minority tribes, is obviously reverting, amid the usual chaos. Iraq continues to be the object of Washington's intense attention, as it has been since the first Gulf War, for reasons that deserve analysis but manifestly had nothing to do with 9/11. Domestic terrorism in the U.S., which could have been as serious as the Irish Republican Army's recent bombing campaign in Britain (why no War On Terror against them, by the way?) mysteriously did not materialize – even though episodic outbreaks of Immigrant Mass Murder syndrome have shown how easily individuals with rifles could paralyze the country.

Above all, the Bush Adminstration continued with its fanatical drive to accommodate the Mexodus, heedless of border security.

I find I don't feel like writing a VDARE.COM reflection on 9/11 this year. It's a game. America's elites didn't really care. They just got on with their agenda(s).