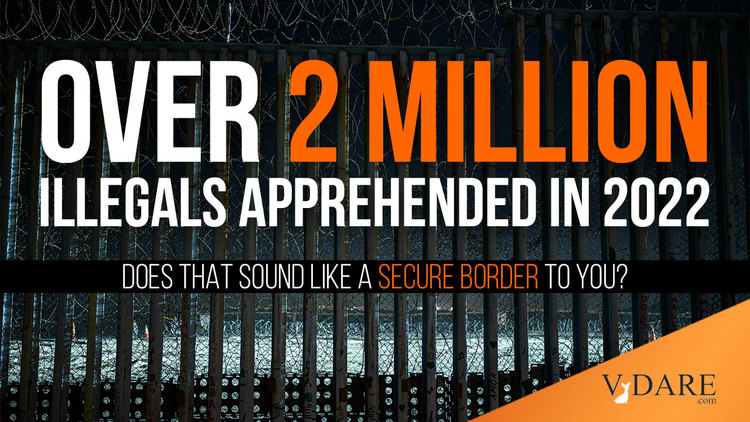 Florida Governor Ron DeSantis’ hilarious Martha’s Vineyard massacre of Ruling Class hypocrisy on illegal immigration is just the start: The Biden Regime can’t admit the truth about the illegal immivasion because it deliberately caused it for Great Replacement reasons. Thus when NBC’s Chuck Todd noted recently that more than 2 million illegal aliens have been apprehended this fiscal year and asked Vice President Kamala Harris about it, Biden’s “Border Czar” claimed the border was “secure,” that problems there are former President Donald Trump’s fault, and that the solution is Amnesty [Kamala Harris insists border ‘secure’ as illegal migrants set to pass 2M, by Emily Crane, New York Post, September 12, 2022]. Democrats are handing a gift to the GOP/GAP. The obvious questions: Will the party seize on it to ensure a Red Wave in November’s midterms—and will Biden’s border treason motivate them to say they will impeach Biden if and when they take back Capitol Hill?

White House Press Secretary Karine Jean-Pierre, herself a Third-World immigrant, affirmed Harris’ claim last week. “We are doing a lot more [than Trump] to secure the border and could be doing even more if Republicans would stop their obstruction,” she claimed. This is the same woman who said last month that no illegals were walking across the border. Jean-Pierre added that Republicans blocked funding for border security in Congress [White House says Biden ‘doing a lot more’ than Trump ‘to secure the border,’ W. James Antle III, Washington Examiner, September 13, 2022]. It’s unclear what this meant, but she’s presumably alluding to the Amnesty bill that Biden proposed in early 2021. Unlike past Amnesties, to please the Democrat Left that bill contained virtually no border security measures. Nor did it contain money for a border wall, or additional money for Border Patrol or Immigration and Customs Enforcement. It was a straight Amnesty.

That Biden officials repeatedly lie about the border invasion and the policies that caused it shows they realize how bad the issue is for them. Thus Jean-Pierre tried to mock Trump for not finishing the wall, and said Biden is doing more to erect barriers. But this is a 180-degree turn from what he promised on the campaign trail and in the early days of his tenure. Then Biden proudly bragged about stopping the wall. Now his lackeys claim he’s doing a better job of building it than Trump!

Democrats have to lie because telling the public the truth about their immigration policy would hurt them in November. The videos from the border are the best ads for Republicans. You can see illegals calmly lined up waiting to be detained as if they’re at an airport terminal. They know the “detention” is their ticket into the U.S., where they need not fear deportation. You can see illegals easily cross climb the border barrier in camouflage and easily escape detection from an undermanned Border Patrol. Even the illegals themselves insist the border is open.

The result of a successful human smuggling operation in Yuma. Smugglers bring in groups of migrants from countries all over the world like Russia,Georgia , Belarus , Cuba , Brazil and more
Massive line of migrants await to be apprehended by border patrol agents @DailyCaller pic.twitter.com/0aGEDZSjek

EXCLUSIVE: In just a 45 minute span in Naco, AZ, our team saw over a dozen illegal immigrants dressed in camouflage use a rope to scale the border wall, then run into AZ. None were caught, making them “gotaways”. There have been over 500,000 gotaways so far this year. @FoxNews pic.twitter.com/kV29qahnEY

Illegal immigrant to @GriffJenkins: “The border is open…it’s open because we enter, we come in, free — no problem.” pic.twitter.com/vUKf1E6kb3

This isn’t Trump’s fault, or a natural occurrence no one can stop. This is the intended result of Biden’s policies. His administration just doesn’t want to admit it due to the political backlash.

Consider what Biden has done:

The results speak for themselves. Again, border agents will apprehend more than 2 million illegals by the end of the fiscal year. Another half-million illegals slipped by border agents without being apprehended—going to this trouble presumably because they know they have reason to fear even the current minimal screening. Facilities are beyond their capacity and it leads to the Biden Regime freeing illegals with just a ticket to appear in court [Migrant surge overwhelms Border Patrol and shelters in El Paso, by Julia Ainsley, NBC News, September 13, 2022].

But as Harris made clear, the Regime has no plan to stop a policy that is working as planned: flooding the country with illegals who will eventually become Democrat voters as part of The Great Replacement.

Though the leftist MSM is covering the border invasion, they don’t give it the attention it deserves. Yet voters still rank it as one of their top concerns for this election. NBC found that 26 percent of those polled say immigration is either the most important or second most important issue facing the country. That figure was nearly 10 points higher than abortion, an issue that receives far more MSM attention [NBC News survey finds 2022 midterms have entered uncharted territory, by Chuck Todd et al., August 22, 2022]. A new Wall Street Journal poll found that immigration ranks as the fourth most important issue to voters. Fifty-three percent of people surveyed said illegal immigration and the border invasion make them more likely to vote. Republicans have a strong advantage over Democrats on this issue, with voters favoring the GOP to handle the immigration system 44 percent to 29, and the border invasion specifically, 49-23 [Wall Street Journal Poll: Immigration’s a Driver in the Midterms, by Andrew R. Arthur, Center for Immigration Studies, September 7, 2022].

As well, voters don’t like Democrats’ Open Border policies. Fifty-three percent of those polled say there is an “invasion” at the border. Support for immigration and Amnesty has sharply declined. In 2018, three-quarters said “immigrants are an important part of our American identity.” That number now stands at 56 percent. That same year, 65 percent said they support giving legal status to illegals—now that number stands at 51 percent. Additionally, a larger number of Americans support building a wall, 46 percent, versus 38 percent in 2018. Significantly, Republicans are more likely to view immigrants with skepticism. Thirty-nine percent of Republicans say immigrants are more likely to commit crime, 56 percent say they’re more likely to use welfare, and 60 percent say America’s fentanyl comes from illegal-alien drug smugglers. These statements are either true or not far off the mark, but National Public Radio labeled them false and blamed “misinformation” for why so many Americans aren’t thrilled with immigration.

Or maybe Americans draw their own conclusions when they see the hordes crossing our border, the drug deaths in their towns, and the illegals bused and flown into the heartland on the taxpayer dime.

Most Republican candidates seem aware the issue is a political gift and are campaigning on it. The leftist America’s Voice conducted a study on the matter and found that the border invasion is a common element in GOP campaign ads. The group, in extremely outraged terms, found three common themes:

The Biden administration has created “open borders,” undocumented immigrants are responsible for fentanyl overdoses and a full-blown “invasion” is underway.

America’s Voice concludes: “Republicans have made their nativist narrative a top messaging priority.” Of course, we all know “nativism” and “xenophobia” are just terms to denigrate common-sense immigration patriotism.

House Minority Leader Kevin McCarthy made the border crisis a core part of his “Commitment to America” pitch for the midterms. Its second plank pledges that Republicans will seek “a nation that is safe,” and  vows to secure the border and end the illegal drug trade [McCarthy’s “Commitment to America“ rollout, by Andrew Sollender and Alayna Treene, Axios, September 6, 2022].

The immigration issue is already playing well for Republicans along the Texas border. MSM outlets fret that the invasion will convince Democrats to vote red in November [Along the Texas-Mexico border, GOP enthusiasm mounts as Democrats defect over immigration concerns, by James Barragan, Texas Tribune, September 12, 2022].

But it’s not just enough to promise stronger borders. Republicans must punish the Biden Regime for its border treason. That means impeaching Biden and other officials.

Fortunately, some Republicans are laying the groundwork if the GOP takes back Congress. At least eight impeachment resolutions have been proposed and dozens of conservative legislators are reportedly open to the idea. It’s up to Kevin McCarthy, who is reluctant to endorse the idea, to listen to the base and push for it [House conservatives prep plans to impeach Biden, by Mike Lillis, The Hill, August 30, 2022].

And the base is all for it. 52 percent of "Likely U.S. voters" polled by Rasmussen want Biden impeached. That’s a clear mandate [Impeach Biden? Most GOP, Independent Voters Say ‘Yes,’ September 8, 2022].

It’s up to Republicans to make Biden’s border malfeasance into the campaign issue of 2022 by pledging to impeach Biden if and when they take back power.

A president who aids and abets a foreign invasion commits treason and must be removed from office. How complicated is this?