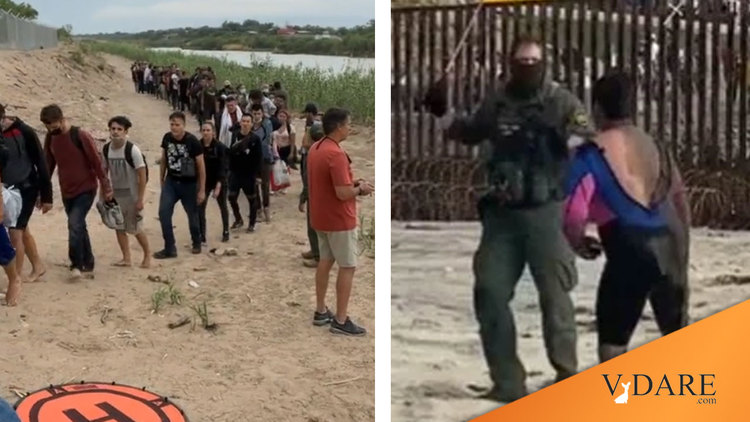 Now, the Biden administration’s personal Stasi is supposedly investigating an arrest of some smugglers in California. You will notice in the video that the one smuggler is wearing a wet suit, so  it is likely he swam around the fence [Biden’s FBI Investigating Border Patrol Agents Arrest of Criminals on SoCal Beach While Crowd in Mexico Cheers (VIDEO), by Joe Hoft, Gateway Pundit, August 24, 2022].

It says he’s a smuggler, but it doesn’t say if he was smuggling drugs or people. Clearly, the smuggler wanted to fight and, given the popularity of boxing in Mexico, that’s not something to be taken lightly.

In watching the video, keep in mind the spectators in Mexico yelling at the Agents ”Puto,” basically calling the agents a homosexual slur. (Puta means whore and puto is a male whore...and women don’t usually pay for sex). After the Agents take the suspect to the ground, you can see at least one rock being thrown at them.

Making arrests is never pretty. This appears to be another example of the Biden administration’s trying to criminalize immigration enforcement much like when the administration went after the horse patrol for supposedly whipping Haitian migrants. Those agents were exonerated of the most serious criminal charges but they are still being threatened with punishment. The horse patrol can be charged with conduct unbecoming an Agent and other things.

This will serve to make Agents less inclined to do their jobs. Whoever took the video probably knows this. There is no video showing the lead up to what resulted in the arrests.

In the end, Mayorkas just wants Agents like the Border Patrol Supervisor who opened the gate to let illegal aliens in. The only Agents I know who are still on the job are those too young to retire, those with children for whom they are trying to get the largest nest egg possible before retirement, and those who never believed in the job in the first place.

A Republican administration should seriously look not just at reforming the FBI, but also the entire Department of Homeland Security. Perhaps, breaking up the DHS into separate entities is not such a bad idea after all.

PS: Title 42 is still being enforced. They might well end it, but they seem to be a little hesitant about it now with the midterms coming up.