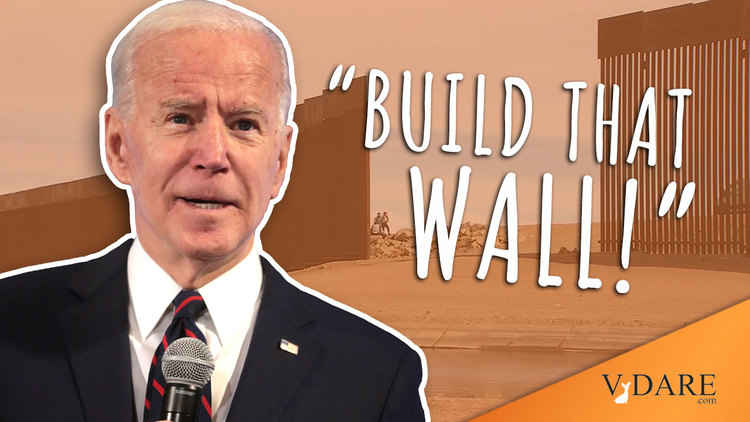 A broken clock might be right twice a day, but it’s right twice for the wrong reason: it’s broken. That’s why the Biden Regime’s decision to close gaps in a portion of the border at Yuma, Arizona, which President Trump started and Traitor Joe stopped, is nothing to write home about. Traitor Joe isn’t filling holes to protect Americans from illegal aliens. He’s closing them to protect illegals from killing themselves.

Biden administration authorizes completion of the Trump-funded U.S.-Mexico border wall in an open area of southern Arizona near Yuma, where four wide gaps make it among the busiest corridors for illegal crossings. https://t.co/XUkmYOggev

Homeland Security chief Alejandro Mayorkas announced yesterday that the U.S. Customs and Border protection will close four holes in the incomplete wall near the Morelos Dam:

The gaps are located within the former Yuma 6 project area, a border barrier project that was previously funded by the Department of Defense’s (DoD) military construction appropriation pursuant to 10 U.S.C. § 2808. Due to the proximity to the Morelos Dam and the swift moving Colorado River, this area presents safety and life hazard risks for migrants attempting to cross into the United States where there is a risk of drownings and injuries from falls. This area also poses a life and safety risk to first responders and agents responding to incidents in this area. …

This project supports CBP’s and DHS’s priority to deploy modern, effective border measures and also improving safety and security along the Southwest Border.

With POTUS 45 Trump gone, border walls are no longer “wasteful and ineffective,” or a “phony answer to the real challenges we face.”

A border wall is the physical embodiment of @realDonaldTrump’s inability to develop effective immigration policy.

His use of Department of Defense funds for the wall is a phony answer to the real challenges we face—and he knows it. https://t.co/JAhysdhNd8

This evening’s Supreme Court ruling allowing @realDonaldTrump to steal military funds to spend on a wasteful, ineffective border wall rejected by Congress is deeply flawed. Our Founders designed a democracy governed by the people — not a monarchy.

Anyway, note the main reason Mayorkas cited to build the barrier: to protect illegal aliens from their own stupid decision to cross the border in a dangerous place.

Democrat Senator Mark Kelly of Arizona, who’s been pushing Let’s Go Brandon to close the holes, has a better reason: “For too long, the Morelos Dam area has been an operational challenge for Border Patrol agents to properly secure the border and keep our communities safe” [After Sen. Kelly’s Urging, DHS to Close Morelos Dam Gaps at the Southern Border, Kelly.Senate.gov, July 28, 2022].

Border Patrol agents fight every single day to secure our southern border, but the gaps near the Morelos Dam continued to put that work at risk. This is an important first step to getting this border crisis under control, supporting our law enforcement, and keeping border communities safe.

Maybe Kelly is more worried about Americans than “migrants” because he is an American—a former Navy fighter pilot, two-time recipient of the Distinguished Flying Cross, and, famously, a space shuttle driver. Mayorkas, a Cuban-Jewish immigrant, is a Treason Lobbyist, and visa fraudster.

The obvious question is when DHS will authorize CBP to erect a barrier at the Big Bend Border Sector in Texas, where agents have rescued 380 illegals, or in the Rio Grande Valley sector, ground zero for the illegal-alien invasion with 44,667 apprehensions last month.

Surely, if the safety of “migrants” is the reason to build a wall, then Traitor Joe must complete one anywhere illegals are in danger of drowning or getting lost in the mountains [Sixteen Lost Migrants Rescued in Mountains, CBP.gov, July 22, 2022].