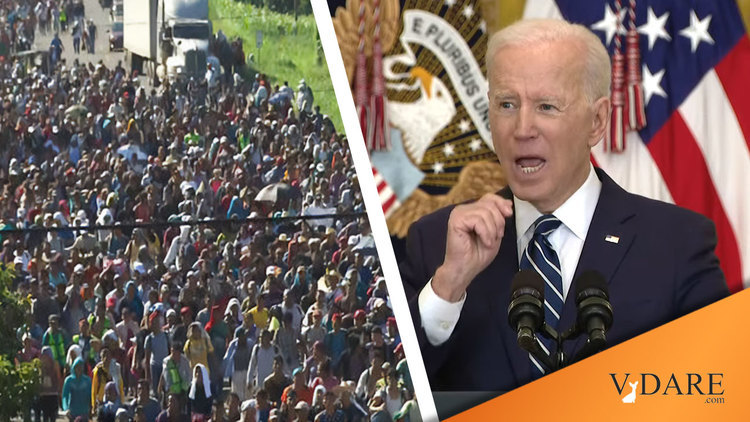 Earlier: Trump Right—Biden’s Immigration Moves Show He Doesn’t Want America To Be A Nation At All

Mexico may be a "hellhole," to put it politely, but it is not in a state of war. Therefore, in my view, all refugee claimants from Mexico are bogus.

Worse are refugee claimants in Mexico but not from Mexico, who have come from Africa or for all I know Dagestan, gotten into Mexico, and presented themselves at the border as refugees entitled to admission. They're already in Mexico, why don't they stay there and do jobs Mexicans won't do? The number of legal and illegal Mexicans in the U.S. means there must be labor shortages.

Mother Jones features the story of some Salvadorans—El Salvador is also a "hellhole" of sorts, but if they don't like El Salvador, Mexico is warm, sunny, and Spanish-speaking—who are telling the harrowing story of their 130-week ordeal, which consists of living in Mexico, and not being allowed to come to the U.S. and take American jobs and taxpayers' money [One Family’s Escape From Trump’s Border Hell: A 130-Week Diary , by Fernanda Echavarri,June 4, 2021].

“A travesty of justice”: If you want to understand just how cruel Trump’s “Remain in Mexico” policy was, read @Fer_Echavarri’s feature following one family’s 130-week (and counting) quest for asylum in the US: https://t.co/eEDQXkw0hL

Mother Jones notes that even immigration judges, frequently picked from the ranks of immigration lawyers, believe the vast majority of these people are bogus refugees:

Lydia Brimelow forwarded this to me with the note "Who is this judge and can we be friends?" It doesn't seem to occur to Mother Jones that given the bogus nature of refugee claimants on the Mexican border, it's the judges who admit as many as thirty percent of the refugees who are wrong.

Trump's program, which he negotiated with Mexican President AMLO, is called the Migrant Protection Protocols, or MPP, and generally known as the "Remain in Mexico" program. The point of having these people stay in Mexico until they are either approved or denied is that if they're allowed into the US, and then told they can't stay, they stay anyway.

“Remain in Mexico” was one of the highlights of Trump’s presidency. The Border Patrol was able to keep at least 68,000 illegal aliens out of the country, signaling that they can’t abuse our asylum system to gain a foot in the door. Now, thanks to Biden, now they can gain that foothold once more [Biden administration officially ends Trump's 'remain in Mexico' asylum policy, by Dareh Gregorian, NBC News, June 1, 2021].

Trump's program kept out a lot of people who, if admitted, would not have been illegals, but legal with the right to work from the beginning, i.e., potential cheap labor.

Below, a chart from Mother Jones of how many people are clamoring at the border to get out of Spanish-speaking Mexico to an English-speaking country with free schools, hospitals, and other benefits: 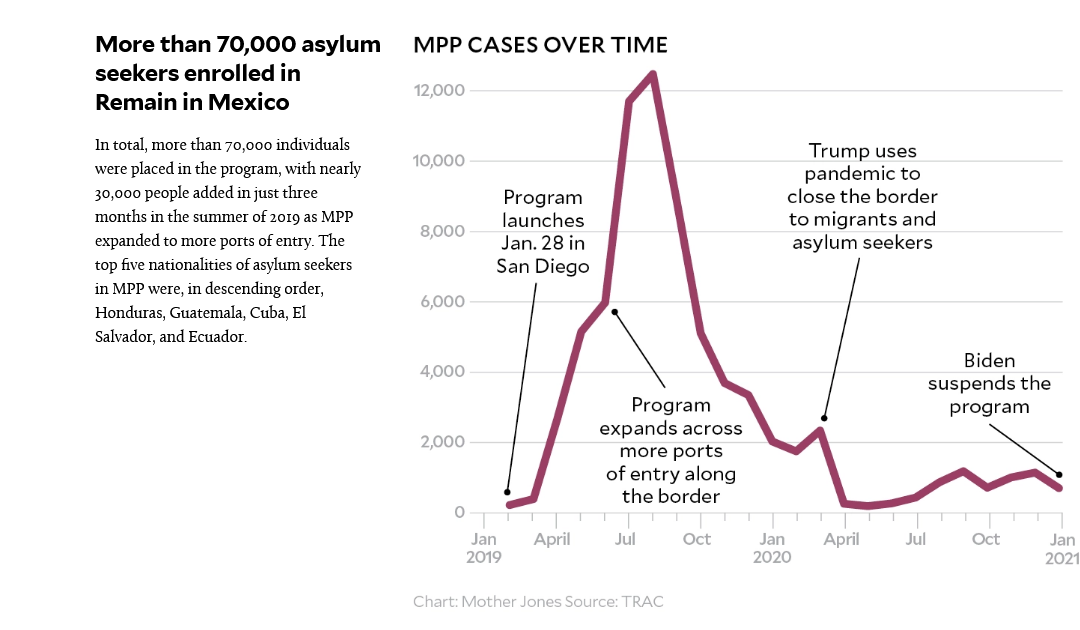