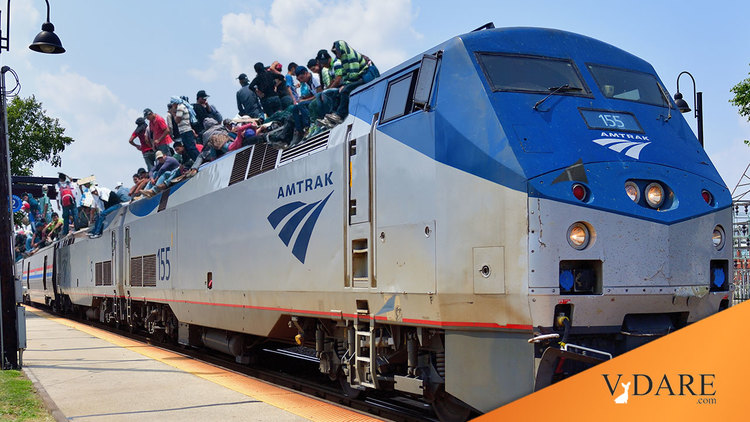 Great Replacement Update: Will Amtrak Be The Biden Regime’s Next Mode Of Transportation To Brown The Country?

Since he took the oath of office, Amtrak Joe Biden has released more than 1 million illegals stopped at the border, using planes and buses to send to and ensconse them in cities and towns so they cannot be found. And even if they are found, they won’t be deported. Now, 19 Republicans in the House of Representatives, led by Sam Graves of Missouri, have asked a good question. Will he use taxpayer-subsidized Amtrak to move them around?

Noting that Biden has opened the borders and is fighting to end Title 42 public-health expulsions and Remain in Mexico, two measures POTUS 45 Trump used to keep illegals south of the border, the congressmen asked Amtrak president Stephen Gardner about the money-losing Sunset Limited train. It runs from New Orleans to Los Angeles through San Antonio, Tucson, and Phoenix.

19 GOP lawmakers signed on to the letter addressed to Amtrak president Stephen Gardnerhttps://t.co/Ku3dxmkc8q

“We are deeply concerned that Amtrak’s resources—especially those supporting the Sunset Limited route—will be used to transport these undocumented persons,” the congressmen wrote:

Such a situation would cause disruptions for Amtrak customers as well as interrupt freight traffic that could further exacerbate the supply chain crisis. Such actions would also constitute an unconscionable use of significant amounts of taxpayer funds and resources to aid in the vast movement of illegal migrants into American communities.

The congressmen want to know whether Amtrak has been planning or discussing transporting illegals, and about discussions with U.S. Customs and Border Protection, the Department of Homeland Security, and state and local agencies and law enforcement. Importantly, they asked Gardner whether Amtrak has spoken with Treason Lobby organizations such as Catholic Charities and the United Way.

Amtrak would be a natural choice to hasten The Great Replacement. After all, as a senator, he rode Amtrak back and forth from Washington, D.C., to Wilmington, Delaware, some 8,000 times [Amtrak Joe: A brief look at President Biden’s long history of supporting America’s railroad, by Kevin Shalvey, Business Insider, April 10, 2021]. Thus did he become Amtrak Joe.

Let’s hope the congressmen didn’t give Biden an idea he didn’t have.