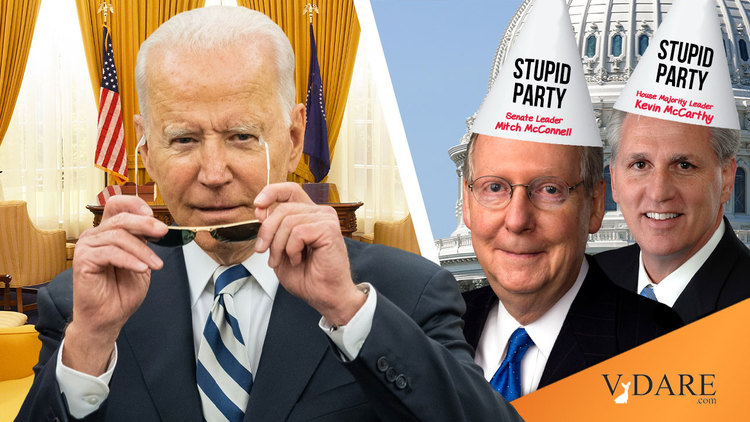 In what might be the most politically embarrassing event of the 21st century, Senate Republican Leader Mitch McConnell has explained what the GOP will do about President Biden’s impeachable border treason if the party regains power on Capitol Hill. The Stupid Party, McConnell said on Fox & Friends on Sunday, will make sure Let’s Go Brandon becomes a “moderate.” More frighteningly, GOP House Majority Leader Kevin McCarthy says the party will not impeach Biden for political reasons, which invited the ire of the neocon Washington Times, because it wants Biden impeached.

First, to McConnell, whom you did not misunderstand. “We will not have the presidency for two more years,” McConnell said:

Obviously, we will have to work with the administration to see what we can agree on but … let me put it this way. Biden ran as a moderate. If I’m the majority leader in the Senate and Kevin McCarthy is the speaker of the House, we’ll make sure Joe Biden is a moderate.

[McConnell: If Republicans retake Congress, ‘we’ll make sure Joe Biden is a moderate, by Joseph Choi, The Hill, April 10, 2022]

“One thing we learned that the Democrats did is they—they used impeachment for political reasons,” Mr. McCarthy told Fox Business host Maria Bartiromo after she asked if he would move to impeach Mr. Biden.

“We believe in the rule of law,” Mr. McCarthy continued. “We’re not going to pick and choose just because somebody has power. We’re going to uphold the law. At any time, if someone breaks the law and the ramification becomes impeachment, we would move towards that. But we’re not going to use it for political purposes.”

The Times asked a good question in a soft-punching editorial that called for Biden’s impeachment. “Is it not a ‘high crime and misdemeanor’ for the president of the United States,” the Times wondered, “to refuse to uphold federal border laws for purely political reasons?”

Well, yes, it is. But in channeling VDARE, the Times did not offer a list of the laws Brandon has broken and is breaking. Forget politics. The law is what matters.

From The Washington Times Editorial Board: "When Republicans win the House, we hope that they will fight for America, defend its borders, and stand up for its people — even if that means removing the sitting president from office."https://t.co/2PQzqL5F8s

As I explained here last week, Brandon and his Homeland Security chief, Cuban-Jewish visa fixer Alejandro Mayorkas, are breaking at least two if not three laws:

Mayorkas has no authority to declare illegals beyond the reach of immigration authorities and to stop deporting them. Nor does Brandon have the authority simply to release what will soon reach 400,000 illegals. They have zero authority to open the borders and declare immigration laws null and void. But that’s what they have done. They brag about it!

Kudos to the Times for using the I word. But mumbling about it isn’t enough. If conservatives want Biden impeached, they must lay out a case that is so clear and convincing that it forces the GOP and its tremulous leaders to submit. If they have a choice, they’ll cut and run.

Impeachment, though, might require a hard-right, intraparty insurrection to jettison McCarthy and McConnell.