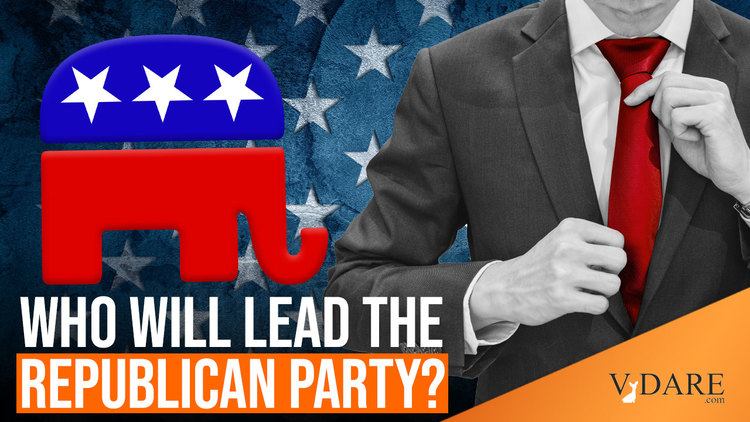 Biden’s Great Replacement Acceleration Act May Be DOA, But GOP Needs A Leader To Defend The Historic American Nation

The Regime Media gave Joe Biden’s Great Replacement Acceleration Act the usual positive coverage last week, but nearly every report doubts it will pass. Not a single Republican supports the Amnesty. That’s a significant departure from 2013. The Gang of Eight Amnesty had bipartisan support; the media greeted it with far more enthusiasm. The difference now: Democrats have veered sharply Left, well beyond where they were even under Barack Obama. Trump, meanwhile, has dragged the GOP, albeit kicking and screaming, farther right. Even the Republican Establishment, as of now, opposes Amnesty.

The Biden Amnesty would, of course, drown the Historic American Nation and institutionalize a permanent majority for the Democrats’ Coalition of the Fringes. Illegals who claim they arrived in America prior to 2021 will receive legal status that makes them eligible to obtain a green card after five years; Three years later, green card holders can apply for citizenship. They will pay neither a fine nor back taxes for breaking the law, a feature of past legislation, just taxes for the years after they become legalized. Incredibly, illegals deported by Trump can return and reclaim squatters’ rights [Biden-backed immigration bill to let deported back in and amnesty for 20M, by Paul Bedard, Washington Examiner, February 18, 2021].

But that isn’t all. The bill will swamp us with legal immigrants. It will increase chain migration by eliminating restrictions on immigrants who want to import entire families. Homosexual couples can bring in their “spouses.” Diversity Visa lottery slots rocket from 55,000 to 80,000. The caps on guest worker visas are raised, allowing corporations to import more cheap labor, and per-country caps on worker visas will be eliminated, another gift to Big Business (and our burgeoning Indian Overclass). The bill would also make it easier and faster for “asylum seekers” to permanently stay in the U.S. [Democrats introduce Biden's immigration reform bill, by Cecilia Vega and Quinn Owen, ABC News, February 18, 2021].

Aside from bringing in people, Biden’s Great Replacement Acceleration Act sends out billions in foreign aid to Central America to tackle the “underlying causes” of illegal migration. The real underlying cause is a broken system that rewards lawbreaking and cheap-labor importation. Throwing money at Honduras, Guatemala, and El Salvador will do nothing…except send money down the drain.

Past efforts to pass as Amnesty talked of toughening border enforcement and even building a wall. Those measures were a facade, but enough to give cover to squishy Republicans who wanted an excuse to back Amnesty.

In contrast, Biden and the bills Democrat backers are honest...or arrogant. This bill doesn’t even pretend to improve border security. It does mandates “new technology” for the border — “new” and “technology” being buzzwords that suggest serious border control — but doesn’t provide any assurance the border will, in fact, be controlled. Instead, the bill invests money in speeding up asylum applications so more “migrants” can stay [Democratic Lawmakers Introduce Biden’s Immigration Overhaul in House, by Michael D. Shear, New York Times, February 18, 2021].

The upshot: Democrats are committed to Open Borders and don’t much care whether Republicans work with them. After all, immigration enforcement is “racist.”

The bill’s lead sponsors speak to its lack of widespread appeal: New Jersey Sen. Bob Menendez and California Rep. Linda Sanchez, two Hispanics who proudly represent the ethnic lobbies. The other sponsors are hard Leftists. The House version includes most members of the congressional black and Hispanic caucuses. The Senate’s is sponsored by Majority Leader Chuck Schumer and seven 2020 presidential candidates.

Most interesting is Bernie Sanders. The Vermont senator once criticized Amnesty as a threat to American workers. He called Open Borders a “Koch Brothers proposal” in 2015. Now, he backs both. The radical Left prefers foreign workers over Americans.

Fortunately, Biden’s Great Replacement Acceleration appears dead on arrival. As VDARE.com previously reported, no Republican is backing it. And unless the Democrats nuke the filibuster, the bill can’t pass without 10 Republican votes.

Democrats might not even get the full support of their own caucus in the Senate. None of the eight Democrats who recently voted to deny COVID stimulus benefits to illegals have sponsored the bill [Dems split as progressives rage over immigration vote, by Burgess Everett and Marianne Levine, Politico, February 8, 2021]. At least one or two dissidents, West’s Virginia’s Joe Manchin and Arizona Kyrsten Sinema, might oppose Biden’s Amnesty outright. Manchin’s Mount State is deep red; Sinema is a somewhat independent thinker on immigration. Both want to be seen as moderates, so both oppose eliminating filibuster. No matter how inclined Democrats are to do so, all 50 Democrats are needed to do that [As filibuster clash paralyzes Senate, Democratic frustration grows, by Sahil Kapur, NBC News, January 25, 2021]

As for the GOP, not just conservatives such as Sens. Ted Cruz of Texas and Josh Hawley of Missouri have come out against an Amnesty.

Last night, Biden backed amnesty and conceded he did not have a plan to get our kids back to school.

Florida Sen. Rick Scott, the chairman of the National Republican Senatorial Committee, also ripped into it:

This is an unserious proposal that reflects how far left Senate Democrats have gone on the issue of immigration. Senate Republicans will not hesitate to share with the American people exactly how the Democrats’ Open Borders, amnesty proposal will put their families at-risk.

Again, this isn’t what we heard in 2013, when the Stupid Party lived up to its name. Four senators were lead sponsors on the Gang of Eight amnesty. Two of them, Lindsey Graham and Marco Rubio oppose Biden’s bill. Alaska’s Lisa Murkowski and Maine’s Susan Collins might support this new Amnesty, but that won’t matter unless, again, the Democrats do away with the filibuster.

What changed? Donald Trump won a presidential primary and general election by opposing illegal immigration and cheap foreign labor. Republican lawmakers grudgingly realized that was time, and in their best interest, to back Trump and not the late but unlamented John McCain. Rick Scott’s remarks demonstrate how Trump remade the party. The man had his failures. Making the party better on immigration wasn’t one of them.

That said, why hasn’t a single Republican become the party’s leader on the subject? Defeating Amnesty is all well and good. But Republicans must also attack Biden on permitting Trump’s immigration moratorium to expire in March, bringing in 25,000 refugees, any number of whom might carry the Flu Manchu, and the plan to import more cheap labor. Defense is not enough. They must attack. Those are issues waiting for a persuasive voice.

An example of what to do comes from the most unlikely of legislators: Mitt Romney. The Mormon Stater has joined Arkansas’ Tom Cotton in a provocative bill that would raise the minimum wage, but make it impossible for businesses to hire illegal immigrants. While neither Romney nor Cotton spelled out the details on banning illegals, it likely means mandatory e-verify [Cotton, Romney introduce bill pairing minimum wage increase with tighter citizenship verification, by Joseph Choi, The Hill, February 16, 2021].

Democrats will never support this idea. The wisdom of raising the minimum wage aside, it’s a brilliant play. It’s a good sign that Romney, a Never Trumper with 2024 ambitions, believes immigration patriotism helps his political career.

Bills like these won’t pass a Democrat-controlled Congress, but that’s not the point. Republicans can win elections in 2022 and 2024 with aggressive proposals for border security and against illegal immigration and cheap labor. Make Democrats vote on mandatory e-verify. Make them vote on immigration reductions. Make them vote on sanctuary cities and foreign workers. The proposals would give fits to moderate Democrats and help defeat extremist legislation. Presidential hopefuls can bolster their credentials for 2024.

However, there is another threat that VDARE’s John Derbyshire has identified. The Democrats might split the bill into pieces to ease passage. The smaller bill with the greatest chance of passage is a limited Amnesty for so-called “Dreamers” — illegals who landed here as minors. Enough Republicans might support it to get by the filibuster.

This is why the primary defeats of immigration patriots Jeff Sessions and Kris Kobach were incalculable blows. The men who defeated them, Tommy Tuberville and Roger Marshall, could vote with the Democrats on such a measure. Recall that Tuberville hired open-borders booster Rob Jesmer to help his campaign, and Marshall thinks illegal-alien kids “are the American Dream, and they are conservatives” [Rep. Roger Marshall on DACA Recipients: ‘These Kids Are the American Dream,’ by Robert Kraychik, Breitbart , January 24, 2018].

Still, even a DACA bill not guaranteed to pass. It might alienate the Democrat Left by giving too much to Republicans, or Republicans might fear their own base enough to oppose it. We have to hope Republicans have learned that a “no” vote on any Amnesty is the only sensible vote.

Immigration patriots should be optimistic. Amnesty likely faces another defeat. And Republicans are awakening not only the danger of Open Borders but also the political profit from opposing the Left on immigration.

Maybe, just maybe, the GOP can be brought to understand that the Historic American Nation is more important than cheap labor and profits for Big Business and Wall Street.