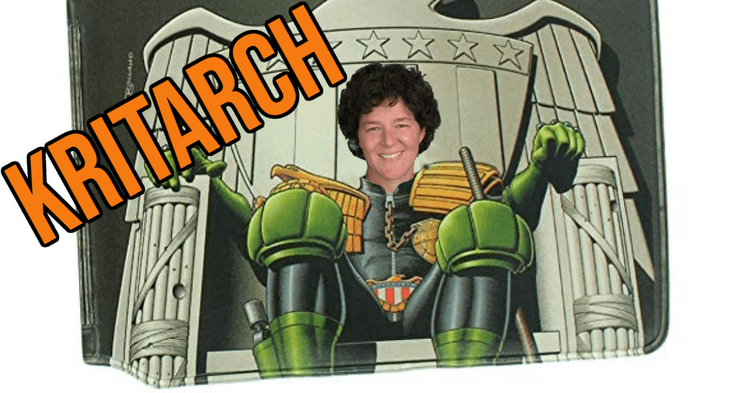 Liberal democracy isn’t “in crisis,” as journalists and academics keep saying, it’s already over. In the U.S., the critical

decisions on immigration, Affirmative Action, and other issues are now made by judges, a system known as “kritarchy.” In the U.K., the British Supreme Court has usurped the monarchy as the font of law in a decision blatantly intended to prevent Brexit. Across Europe, judges simply overrule elected officials and formulate immigration policies. The illusions most Westerners have about their “free” political systems can no longer be maintained and we must purge ourselves of fantasies if we want real change.

Many Americans thought they were getting real change when they elected Donald Trump president on a platform of immigration restriction. In the teeth of Ruling Class hysteria, it’s still hard to believe that he was actually elected.

Allison Burroughs is also the judge who upheld Harvard’s affirmative action policy earlier this week. Her rambling, flowery judgment declares that “it is somewhat axiomatic at this point that diversity of all sorts, including racial diversity, is an important aspect of education.” Beginning from this questionable “axiom,” she justifies policies that harm Asian-Americans and whites because of the “compelling interest” of achieving “diversity.”

The government’s “compelling interest” in achieving diversity has already been established by the Supreme Court. Programs, policies, and trainings to achieve “diversity” are now staples of American life. “Diversity” dominates our discourse. Yet there is nothing in our Constitution that mandates this–courts simply asserted it, and the political and academic systems obeyed.

Somehow, Judge Burroughs thinks allowing colleges to discriminate will ultimately lead to a racially neutral society. “The rich benefits that flow from that diversity will foster the tolerance, acceptance and understanding that will ultimately make race conscious admissions obsolete,” she writes. Yet why would that happen when affirmative action incentivizes non-white students to organize based on race? Rachel Dolezal and Elizabeth Warren didn’t pretend to be non-white because they wanted to be oppressed. They did it because they wanted the material, economic benefits that “flow from that diversity”—if you can claim the right caste membership.

Judges have imposed other sweeping changes on our way of life. In 1994, California voters approved Proposition 187, which would have massively reduced (if not eliminated) illegal immigration into the once Golden State by eliminating taxpayer subsidies. A District Judge, Mariana Pfaelzer, threw out the law on the grounds that California was enacting its own immigration policy, a power that properly belongs to the federal government. Governor Gray Davis, directly working with the Mexican government, abandoned the appeal.  Since then, California has been dramatically transformed into what is essentially a Third World state. Its political culture and way of life was utterly transformed in defiance of its citizens’ wishes.

The same thing just took place in the United Kingdom. Its constitutional monarchy has just been quietly abolished without many people noting.  The Supreme Court ruled that Prime Minister Boris Johnson unlawfully suspended Parliament several weeks ago [Supreme Court: Suspending Parliament was unlawful, judges rule, BBC, September 24, 2019]. Yet technically, PM Johnson wasn’t the one who suspended Parliament; the Queen did. The Supreme Court is essentially claiming that it can overrule the Queen and that it, not the Crown, is the font of law [The Curious Remainer Coup, by Michael Brendan Dougherty, National Review, September 24, 2019]. In practice, this abolishes the unwritten British Constitution, which is why pro-Brexit MPs like Jacob Rees-Mogg claimed it was a “coup” [Jacob Rees Mogg attacks Supreme Court ‘coup’ in raging Cabinet phone call, by Nicola Bartlett, Daily Mirror, September 25, 2019].

Queen Elizabeth is head of state in name only, a kind of bejeweled notary public, and the prime minister, Boris Johnson, is merely the head of her government. His recent prorogation of Parliament in the hope of forcing a no-deal Brexit was declared null on Tuesday by the recently created Supreme Court of the United Kingdom, led by "Red" Brenda Hale, Baroness Hale of Richmond, with whom the British people are being told the buck ultimately stops.

This is lawless. Never in the history of the British Isles has the judiciary exercised any power over such decisions. The font of law is the monarch, who has given her assent to the prorogation upon the advice of her ministers. The Supreme Court's ruling is nonsensical on its face because it assumes a jurisdiction that it does not possess.

[Why Boris Johnson should be the next Oliver Cromwell, The Week, September 25, 2019]

Yet ultimately Johnson, Rees-Mogg, and others have simply accepted the decision.

This is the typical Anglo-American conservative attitude towards the courts; baffled rage that judges are simply asserting powers they do not possess, followed by meek acquiescence. Boris Johnson now finds himself negotiating with a European Union that has no interest in making a deal, meaning that the next few weeks will be consumed by utter chaos [E.U. rejects Boris Johnson’s Brexit proposal, raising prospect of chaotic break within weeks, by Michael Birnbaum, Washington Post, October 3, 2019].

There are similar cases in Europe. In August, a judge ruled that “international law” requires Italy to accept hundreds of migrants. In Denmark, a judge mandated family reunification in some immigration cases, undermining the center-left government’s ability to control immigration [EU court rules against Denmark in remarriage immigration case, Reuters, July 10, 2019] In Hungary and Poland, attempts by nationalist governments to assert control over the judiciary have to led to efforts by the European Union to sanction them [Hungary optimistic over swift end to ‘absurd’ EU rule-of-law row, by Valerie Hopkins, Financial Times, September 29, 2019].

Who rules? Not the politicians, and certainly not the people. It seems judges and journalists do. Indeed, it’s the mistaken belief that we rule which allows this situation to continue.

Thus Curtis Yarvin (a.k.a. Mencius Moldbug)’s return to political writing comes at the perfect time. Yarvin is revealing (and dispelling) many cherished political illusions in a five-part series, the first installment of which was just published at The American Mind [The Clear Pill, Part 1 of 5: The Four Stroke Regime  , September 27, 2019]. “Public opinion is an effect, not a cause,” he declares. He argues that the “civic core,” identified as the permanent civil service and “civil society” [i.e. journalists, academia, philanthropic organizations, etc.] directs the “political core,” the people who supposedly are sovereign.

Yarvin also accurately notes that the “commoners,” i.e. the suburban middle class, are constantly opposed by the alliance between the “gentry” and the “clients,” the “votebanks” who support them. This elite/client alliance against the middle class has also been recognized by the late Sam Francis and Angelo Codevilla.

Of course, more than any other issue, the issue that defines the split between the elite and the middle and working classes is immigration. Big Business wants cheap labor, Democrats want “votebanks” of reliable non-white supporters, nonprofits want more clients. The rest of us just want to keep our country.

Yarvin has not addressed, yet, the role of the judiciary. It’s becoming clear that popular sovereignty is a myth and we are ruled by an elite as impenetrable as that any that presided over the Holy Roman Empire. And in some ways, elected officials benefit from judicial rule. They can tap into grassroots anger over bad decisions while avoiding the responsibility of making new laws. The Founders did not anticipate this.

Currently, judges make law, journalists police the Narrative and manufacture opinion, and politicians, even supposed “authoritarians” like Trump, go along with it. Kritarchy may represent the real end stage of “liberal democracy.”

To change this, we need to abandon the pretense that we are free and recognize that we are ruled by an elite hostile to our interests. We need to delegitimize the institutions that keep us in this situation. We need to strip away the aura of sanctity that surrounds these judges who are arbitrarily deciding our country’s most important policies. Judges are politicians, just like journalists are activists.

The Democrats want to impeach President Trump. But instead, it’s about time Republicans at the federal and state levels start impeaching some judges.

If they don’t, then we should frankly admit the Constitution has failed—because one branch of government has achieved supremacy above all others.

In that case, I hope journalists can spare us the moralizing about “liberal democracy.” It’s long gone—if indeed it ever existed.