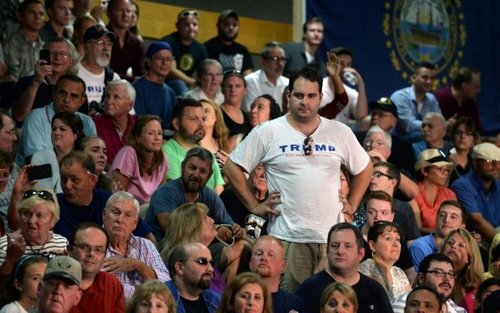 On the eve of the final GOP presidential candidates’ debate, Conservatism Inc. still hasn’t decided whether to denounce Donald Trump as a RINO or a fascist. But the Left is voting for “fascist” and Conservatism Inc. notoriously ends up doing what the Left wants.

George Orwell famously wrote, “[A]s used, the word ‘Fascism’ is almost entirely meaningless.” But to the Main Stream Media, fascism has an obvious meaning. A “fascist” is anyone who supports Donald Trump.

The Donald had a typically Alpha Male response when asked if he was bothered by such comparisons. He said, simply, “I don’t care,” prompting a new outbreak of inadvertently hilarious passive aggressive whining from the MSM [‘I. Don’t. Care.’: Trump brushes off horrified reaction to his Muslim ban, by Ed Pilkington, The Guardian, December 8, 2015]. One can’t help but wonder if he’s reading some of the material on the Alt Right [I Don’t Care, by Jack Donovan, Radix, October 31, 2014]

It’s a strange history where a proposal for temporary halt in Visas and an expansion of an already existing religious test is immediately linked with Panzer divisions merrily rolling through Poland. Of course, to normal people, a hypothetical America festooned with giant red and white banners reading “Can’t Stump the Trump” and schools full of children forced to read “The Art of the Deal” is absurd and hilarious. Nonetheless, Leftist reporters seem genuinely terrified such a thing is about to happen.

But even as the lying Main Stream Media shrieks about the imminent Trumpreich, there is an eerie silence as Barack Obama’s Occupation Government engages in actions which would be termed “fascist” if directed against non-whites and non-Christians. Chief among them was Attorney General Loretta Lynch’s declaration to a group called the “Muslim Advocates” that her “greatest fear” was the “incredibly disturbing rise of anti-Muslim rhetoric.” Lynch said the Justice Department would “take action” against those who engaged in speech that “edges towards violence.”

Lynch later had to walk back the remarks, or, as Politico put it tactfully, “recalibrate” them. “Of course, we prosecute deeds and not words,” she blithely stated at a press conference. [AG Loretta Lynch: Hey, Forget I Said That Stuff About ‘Taking Action’ Against Free Speech, by Jim Treacher, Daily Caller, December 7, 2015] But, as we know, a gaffe is when a public figure actually says what’s on her mind.

Needless to say, the forthright and open calls for people to assassinate Donald Trump are remaining unpunished and largely ignored by the MSM [‘Kill Trump’: Enraged Left Calls for Assassination, by Douglas Ernst, WND, December 8, 2015]. And the Justice Department’s definition of what “deeds” to prosecute is rather loose. During the same speech to that “Muslim Advocates” group, Lynch announced the Department of Justice was going to investigate the Texans involved in the arrest of “Clock Boy,” Ahmed Mohamed—even though the hoax has already been exposed and Mohamed and his family have already moved  to Qatar.  (The father is a dual citizen of the US and the Sudan, the son is a native-born American—they may be back.)[Loretta Lynch to Muslim Group: DOJ to Investigate Arrest of ‘Clock Boy’ Ahmed, by Lana Shadwick, Breitbart, December 4, 2015].

Meanwhile, with the help of the MSM, President Obama has smoothly shifted the blame for the San Bernardino shootings to guns. As a result, the President has stated “his team was looking for ways to tighten gun laws without a vote in Congress.” This could include “closing the so-called ‘gun show loophole’ that allows people to buy weapons at gun shows and online without a background check [White House Finalizes Proposal To Expand Background Checks on Gun Sales, by Associated Press, Huffington Post, December 10, 2015]

Why not? The President unilaterally changed immigration law without any meaningful resistance from the Republican Congress.

Obama has even proposed banning gun sales to anyone on the “terrorist watch list,” a seemingly random assemblage of names that anyone can be on at any time, including members of Congress or soldiers [Ban guns for those on watch list? Not so fast, critics say, FoxNews, December 8, 2015]. Thus, a right explicitly guaranteed by the Constitution would be stripped with no due process and indeed, no standards of any kind.

Disappointingly, Donald Trump also supports this proposal [Republicans split on guns for terror watch list members, by Eric Bradner, CNN, November 22, 2015]. And Trump has also spoken about imposing regulations on the Internet, something the federal government has been moving towards under the guise of fighting “hate speech” [Donald Trump thinks he can call Bill Gates to ‘close up’ the internet, by Nick Statt, The Verge, December 7, 2015]

Here, we see the hypocrisy of both sides. No one in the MSM calls Obama a “fascist” for taking unconstitutional actions. At the same time, Trump’s supporters unironically cheer their man’s characterization of the MSM as “scum” who want to “surrender the Constitution” [Trump: Media is scum, by Jonathan Easley, The Hill, December 7, 2015]

But even if Obama and Trump agree on a single policy, the unanimity hides a deeper divide. “A government of laws, not men,” if it ever existed, is now thing of the past. Whether a crime is investigated by the Department of Justice or is simply forgotten depends entirely on the racial and sexual identities of the victims and perpetrators. Thus, “Clock Boy” is a federal case, while the murders of a pastor’s wife or a six year boy by blacks are barely even news [Sleeping 6-Year-Old Boy Stabbed to Death In Kentucky Home Invasion, AP, December 9, 2015]

Moreover, Americans have caught on how the MSM and government work in partnership to destroy individuals’ lives. There isn’t a person reading this site who can’t have their life destroyed tomorrow if a member of a Protected Class takes offense at even an innocuous statement. What are sometimes called “SJWs” (Social Justice Warriors) specialize in creating media frenzies against targets who can’t defend themselves.   And these days, self-styled “anti-fascists” busy themselves with militantly defending the status quo, punishing dissidents from Establishment opinion, intimidating big business into helping them, and kvetching about how the state needs to do more to shut down speech that makes them sad [The Dobermans of Political Correctness, by James Kirkpatrick, Radix, September 10, 2014]

But Leftists tried the usual tactics of economic boycotts, social shaming, and media hysteria against Donald Trump and Americans saw how it failed. So now, the same people the MSM and academia delight in pushing around have someone powerful enough to push back.

Beltway Right types proclaim pompously that we must be cautious about embracing state power because it sets a precedent that could one day be turned against conservatives or libertarians [Trump, the Anti-Constitutional Authoritarian—Liberty Lovers , Beware, by Charles Cooke, National Review, Cooke]. However, in the America of 2015, constitutions, precedents, the “rule of law,” and all the rest of the totemic phrases Conservatism Inc. invokes don’t seem to even delay the Obama Administration, let alone stop it. Only the political mobilization of the historic American nation can check against a ruling class determined to dispossess European-Americans. Trump is emerging as the mouthpiece for that constituency.

Americans are already being targeted by a hostile government. They are less concerned about restricting the state than returning the favor. Trump’s supporters dismiss hysterical claims that Trump will round them up someday because they perceive Trump as inherently on their side [Attacks on Trump just make these voters like him more, by David Weigel, Washington Post, December 10, 2015]

Trump’s supporters are beginning to understand politics is about who, not what, and seem to trust that he use the state to protect them from perceived enemies, rather than unleashing it on them, as Obama has done. The rise of Trump isn’t “fascism,” but long overdue resistance and self-defense from an occupied people tired of being treated like enemies of the state in the country they built

In his essay, Orwell eventually concludes that the word “bully” is “as near to a definition” of “fascist” as the English-speaking world can come up with. And SJWs, the MSM, and the Obama Regime are nothing if not bullies.

Trump simply shows the American Right is finally learning what every young boy discovers on the playground: A bully will keep beating you up and taking your stuff, day after day—until you finally punch him back.