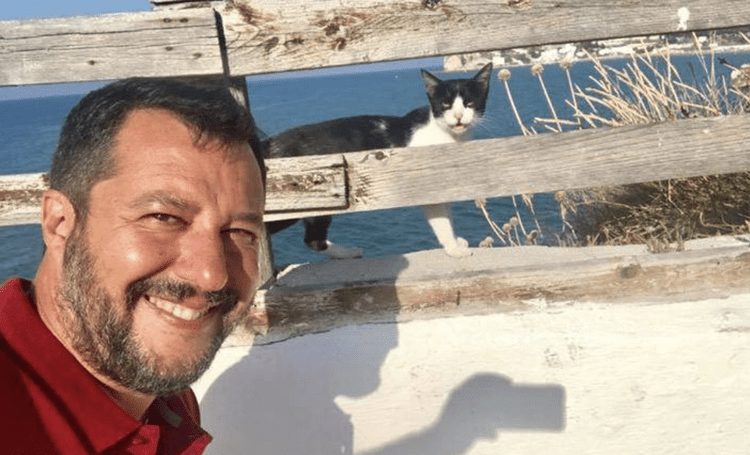 Much like in the United States, elected politicians in a democracy don't seem to hold the real power. The judges do. Thus, a judge recently declared that Italy must accept hundreds of migrants into its territory because of "international laws."

A migrant rescue ship with nearly 150 people on board has docked near an Italian island after a judge in Rome overruled the interior minister Matteo Salvini’s ban on the boat entering the country’s waters.

The Open Arms was stranded in the Mediterranean Sea for nearly two weeks after Mr Salvini said the ship should not be allowed to dock.

Since coming to power in June 2018, the head of the far-right League party has made closing Italian ports to rescue boats one of his flagship policies. He also spearheaded a stringent new law which allows ships to be fined up to €1m for illegally entering Italian waters.

[Migrant ship with 150 on board arrives near Italian island after judge overrules Salvini’s ban, by Emma Snaith, The Independent, August 15, 2019]

There is already another ship mysteriously "stranded" with "children" that must be rescued. Again, those facilitating the invasion of Europe, much like those facilitating the invasion of America, know what they are doing. Any legal loophole will be exploited, and the Main Stream Media will use moral blackmail to lobby for it. As for crimes by those of non-European descent, well, those only matter if they could fuel a "backlash."[Muslims in Italy fear backlash after London Bridge terrorist identified as Italian, by Amy Southall, TalkRadio.co.uk, June 8, 2017]

Of course, this makes even the pretense of self-government or independence a joke. It would be more honest if we could dispense with the pretense of flags, elections, and countries, and admit that the West is divided into administrative units ruled by judges who make things up as they go along.

However, that doesn't mean it needs to stay this way. Standing against what is happening in Italy is Matteo Salvini, who has risked all in a gambit for new elections. From a political perspective, this issue with the migrant ships will likely help him. However, the Left is moving torward uniting against him.

The far-right Il Capitano (“The Captain”), as his supporters have nicknamed him, is trying to capitalize on his current strength to obtain the “full powers” that he wants Italian voters to give him. “Salvini has electoral momentum behind him: triumph in the European elections and victories in local and regional elections, reinforced by extremely flattering opinion polls,” Marc Lazar, an Italy specialist and professor of history and sociology at Sciences Po University in Paris, told FRANCE 24.

These electoral successes compounded a party management issue Salvini had to deal with. “A significant part of his party demanded the end of this alliance with the M5S, on the grounds that it wasn’t amenable to the League’s policy agenda,” Lazar continued...

This delay was passed thanks to a cross-party alliance in opposition to Salvini — as M5S lawmakers joined forces with those in the Democratic Party (PD), the party of former Prime Minister Matteo Renzi. At present, the two parties are not allies. However, this “convergence” against Il Capitano “could lead to something else,” Ludmila Acone, an Italy specialist and historian at Paris 1 University, told FRANCE 24...

[Can a left-wing alliance stop Salvini from forming a far-right government in Italy?, by Jean-Luc Mounier, France24, August 15, 2019]

It's impossible to overstate the importance of events in Italy. If Salvini can form a nationalist governing coalition in the heart of Western Europe, it would represent an existential threat to the entire EU project of deconstructing European nations. It would also encourage similar movements in other countries.

It also opens the possibility of Italy tilting towards the more conservative Eastern Europeans and the even more exciting potential of transforming the EU into a truly pro-European force, one designed to protect the Continent and its people, not undermine them. A comprehensive, Continental solution is needed lest these "stranded" boats keep showing up.