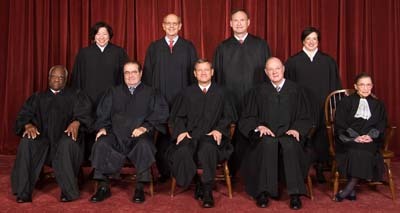 Jared Taylor On Fisher v. Texas: What the Supreme Court Just Did

Jared Taylor in American Renaissance has a powerful piece on the Fisher v. Texas decision:

What the Supreme Court Just Did

A defeat in the form of a compromise.

The Supreme Court’s decision in Fisher v. University of Texas has generated headlines about “compromise” and “partial victory for the foes of affirmative action,” but it is not that at all. It is an out-and-out affirmation of the right to discriminate against white students (and sometimes Asians) in the name of “diversity.” David Hinojosa of MALDEF (Mexican American Legal Defense and Education Fund) got it right when he said, “It’s a great decision by the court reaffirming diversity as a compelling interest.”

If even this allegedly “conservative” Supreme Court is not willing to ban racial discrimination against whites, it is hard to imagine any future Supreme Court that will. The most recently appointed justice, Elena Kagen, did not take part in the decision because she argued for discrimination against whites when she was solicitor general, and it is impossible to imagine any justice appointed by a Democrat—and what other kind are we likely to get?—voting to strike down “affirmative action.” This could be the high-water mark for the Supreme Court’s partial and inadequate rollback of the race-preferences policies under which whites have suffered for the last 40 years.[More]

The University of Texas wanted to get more blacks than were qualified by test scores, so it tried two proxies

The problem is that these strategies recruit people who shouldn't be in college, not only because they're not really college material, but because they're actively dangerous. Jared writes

Some of those top-10-percenters were doubtful characters from miserable ghetto high schools, and although they were certifiably diverse, not even the anti-white fanatics thought they belonged at UT. So in 2003, when the Supreme Court ruled in the two Grutter cases that race could be part of the admissions process after all (see my analysis of those tortured cases here), UT shouted for joy and went back to racial discrimination.

UT set aside 25 percent of its incoming class for people who were not in the top 10 percent, not poor or illegitimate, etc., but whom it could let it for various slippery reasons, mainly race. And now that it could go back to explicit racial preferences, it cut back automatic admits to the top eight percent of students. UT admits that it wanted middle-class, non-deprived blacks and Hispanics who may not have been at the tops of their classes, but who attended good schools and were better than the nasty types coming from the worst schools. UT was worried these lowlifes might encourage “stereotyping.”

It might indeed. For example, Paula Deen recently confessed to using a deplorable, stereotyping word "in a discussion with her husband after a black man held a gun to her head while robbing her at the bank where she worked."

Read Jared's whole piece here—and note that he praises the "the only justice to take a principled stand against preferences across the board", who is, of course, Clarence Thomas.