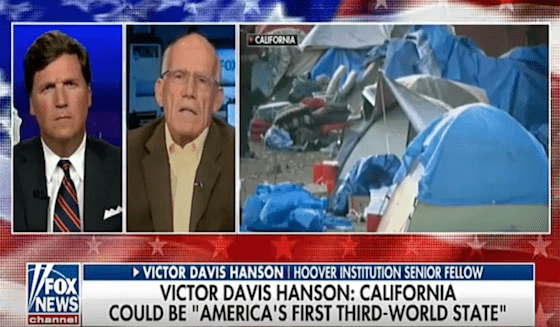 Victor Davis Hanson is a fifth-generation Fresno-area farmer as well as classicist and author, who has experienced the downward spiral of his home state firsthand. He wrote the book Mexifornia in 2003 that shined an early light on the competing values that were unraveling the state. See my review here — it’s been 16 years but it seems longer in terms of erosion of the cultural glue in California. 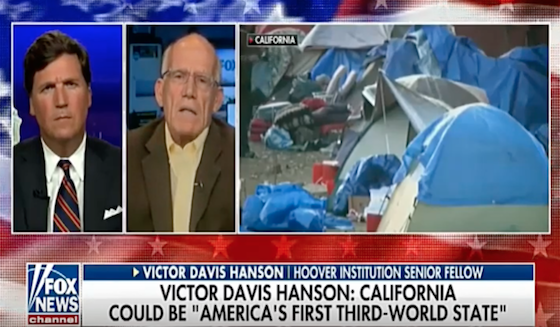 Hanson appeared with Tucker Carlson on Monday to discuss California as a bad example of liberal politics combined with mass immigration. He had recently written an article about the condition of his home, America’s First Third-World State which has many explorable topics.

TUCKER CARLSON: Victor Davis Hanson is a senior fellow at the Hoover Institution. He’s also a lifelong multigenerational Californian; he just wrote a column describing his state as America’s first third-world state. Professor Hanson joins us tonight. Professor, thanks very much for coming on.

VICTOR DAVIS HANSON: Thanks for having me, Tucker.

CARLSON: In what sense is California a third-world state?

HANSON: Well, it has all the symptoms of what we associate with failed states. It’s got the highest basket of income tax, gasoline taxes, sales tax, and yet his schools are rated in the last 10 percent, the bottom 10 percent of the nation’s test scores.

We have a medieval society, Tucker, of a very tiny but very affluent elite.  We have the most billionaires of any state in the nation, and then we have the largest underclass and part of that — and Governor Newsom has got it exactly wrong.

Twenty five years ago when we had Prop 187 that cut off healthcare, but not emergency healthcare to undocumented immigrants that passed by 59 percent of the population. It fueled Wilson’s come from behind victory over Kathleen Brown. It was very popular, but three days later, a Federal Court invalidated it and that got rid of the deterrent factor in people who wanted to come to California often illegally and they resided here illegally.

And that was unfortunately, part of a perfect storm where at the same time four to six million people over the next 25 years said if I’m going to pay the highest basket of taxes, and get the worst roads, infrastructure, public schools, and among the highest crime rate — San Francisco, by the way, has the highest property per capita crime rate of major cities in the United States — then I might as well go where there’s no income taxes like Nevada or Florida.

And the third wind in that perfect storm was, it came at the same time in the late 90s, middle 90s, of the growth of Silicon Valley. So eventually, over the next quarter century, Google, Facebook, Apple would be capitalized at about $3 trillion.

We created a very small but influential, wealthy manorial class that was not subject to the ramifications of their own ideology, and by that I mean, when Jerry Brown retired, he didn’t live here in Fresno, he went to Grass Valley with his pension.

Dianne Feinstein didn’t put her kids — her daughter — in the public school. She lives in Pacific Heights, not Redwood City. Nancy Pelosi rails about education, but none of her grandchildren are in the San Francisco public schools.

So we’ve created a very wealthy class that doesn’t mind high taxes because it has ways to navigate around that and poor social services. And the people in between are sort of like peasants outside of a medieval keep that can’t survive and so they drift off. We were left with a sort of a romanticized indigent class and then a royal elite that doesn’t really care about the vanishing middle class at all.

CARLSON: From the outside, Professor, this doesn’t look like a sustainable system at all. It looks like it’s teetering. Do the people running it sense that, or do they think they can continue forever?

HANSON: Well, they all have one thing in common. I mean, if we look at Gavin Newsom, or Dianne Feinstein or former Senator Boxer, or Nancy Pelosi or Mark Zuckerberg are the architects of this system, they’re all multi-millionaires, in some cases, multi-billionaires.

And so they have a sort of a psychological penance. They feel good about being a virtuous in the abstract. But meanwhile, on the ground level, I mean, we’re sort of like Constantinople under Justinian in the Sixth Century AD.

We’ve seen the return of things like typhus infections near the City Hall of Los Angeles. We’ve seen epidemics of hepatitis A. We’ve got 140,000 people that are living on the streets in California. And we just built a high-speed rail system that we cancelled and now we’re going to — out of shame or, I guess, pride — we’re going to try to build Merced to Bakersfield, a high-speed rail to nowhere where the three main laterals, Tucker, the 99, I-5 and 101 have never achieved their intended result of six lanes.

So it’s sort of like “Road Warrior” in the pre-modern world where we dream of a postmodern high-speed rail system that will never be built.

CARLSON: There is — it is a lot like “Road Warrior,” funny you said that.  Professor, thank you very much for that extensive update.

CARLSON: It is tragic.