When I heard that Hawaiian Judge Derrick Kahala Watson had struck at Trump's attempt to protect the nation from the danger of Muslim immigrants, I wasn't surprised or shocked.

Watson, by the way, is a Hawaiian judge not only in the sense of a being in Hawaii, but in the sense of being an actual Hawaiian, the only one on the bench: Meet native Hawaiian judge who halted revised travel ban, By Jennifer Sinco Kelleher, Associated Press, March 16, 2017. He was appointed by Obama in 2012, to the tune of much rejoicing from the Asian Pacific American Caucus.

So I wasn't surprised that a guy like that would attack Trump, but what was shocking and surprising was that he was using things he had found on the Internet, or read in the papers, that Trump advisors had been quoted as saying in his decision.

Everyone pause to give a slow clap for Stephen Miller, strategic genius, giving court reason to strike down White House travel ban. pic.twitter.com/1woJLFWjyf

Judges just don't do that. Not only are they supposed to read what's in a document, to see if that's Constitutional, they're not allowed to go fishing in the newspapers for evidence, because what is in the newspapers is not evidence.

David Frum is no fan of Trump, although he is aware, unlike most of his colleagues, that there is actually an immigration crisis. (In the 90s, he gave a favorable review to Alien Nation.)

In the Atlantic, Frum has a column called The Dangerous Precedent Set by Judicial Attacks on Trump's Travel Ban | Judge Derrick Watson’s imaginative reasoning asserts a new power to disregard formal law if the president’s words create a basis for mistrusting his motives, March 16, 2017 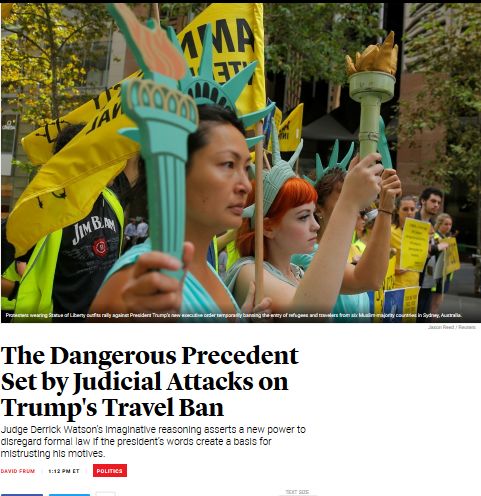 After explaining that, no, aliens outside the US don't have constitutional rights, and quoting the same Supreme Court decision that Federale quoted in his post earlier today (Scalia:"She claims that the Government denied her due process of law when, without adequate explanation of the reason for the visa denial, it deprived her of her constitutional right to live in the United States with her spouse. There is no such constitutional right.") Frum explains:

Why then did Watson accept the far-fetched argument that aliens can acquire First Amendment rights at second-hand? Watson candidly confessed that he was swayed by the avowals by the president and his senior aides that their motives were indeed based on irrational religious discrimination. “In this highly unique case,” he wrote, “the record provides strong indications that the national security purpose is not the primary purpose for the travel ban.” He could not overlook "significant and unrebutted evidence of religious animus driving the promulgation of the Executive Order and its related predecessor.”

Watson’s imaginative reasoning in Hawaii v. Trump asserts a new judicial power to disregard formal law if the president’s personal words create a basis for mistrusting his motives. In the age of Trump, many will be sympathetic to this judicial power—but it is crammed with dangers, too. Not the least of those dangers is that this new rule creates incentives for the president to race to cram the courts with his people in the possibly brief window in which his party controls the Senate. If presidential power ebbs and flows according to the opinions the judges of the moment happen to feel about the character of the president of the moment, the day has come when the courts too must become a prize of hyper-partisan politics.

I’ve argued before in this space that Donald Trump is a uniquely dangerous president. Watson has now revealed to us another of those dangers. In response to the danger posed by Trump, other American power holders will be tempted to jettison their historic role too, and use any tool at hand—no matter how doubtfully legitimate—to stop him. Those alternative power holders may even ultimately win. But in winning, they may discover themselves in the same tragic position as that Vietnam-era army officer who supposedly said: “We had to destroy the village in order to save it.”(Emphases  added.)

Supposedly said is right, above. Journalist Peter Arnett said that he heard a Major (whom he wouldn't name) say it, but no one really believes him any more. It was, as far as I know, a highly successful Fake News attack on the American war effort in Vietnam, and that's why, as I say, it's crazy for the Judge to be putting quotes from Giuliani on television or from Stephen Miller in a judicial order.