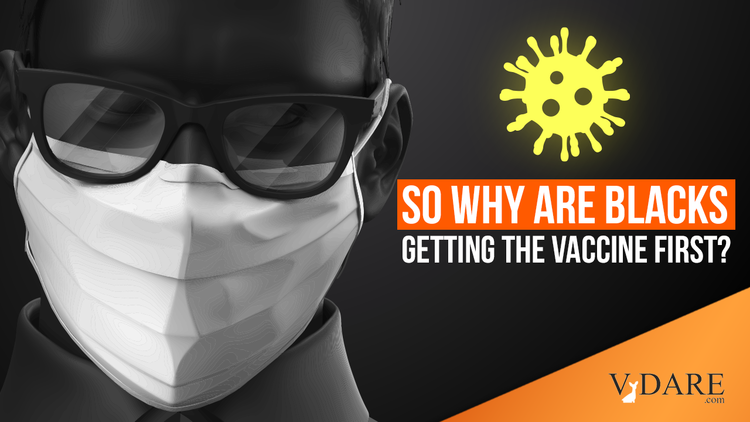 Earlier by Lance Welton: Covid-19 and Race: I Am Completely Vindicated By U.S. Govt. Report

As I have reported before, most Leftists are hypocrites who, deep down, do not believe in “equality” as they so loudly claim. This is why they treat black people as though they are less intelligent than white people. They are also less able to think in a coherent and rational way than conservatives, because they are highly anxious and need to deal with this by convincing themselves that they are morally superior. They have Narcissistic traits, meaning they will say—and even feel they believe—anything that will evoke admiration. But, on some level, they know that it’s not true. So, it’s always best to judge Leftists’ real views by their actions rather than by their words. And their plans for Covid-19 vaccine distribution tell us something quite clear: race is biological and there are race differences in how likely you are to catch, and more importantly die of, Covid-19.

This, of course, struck me as obvious as soon as I heard of the existence of Covid-19. There had previously been clear ethnic differences in mortality from other flu pandemics—such as the Spanish Flu of 1918—and these existed independent of socioeconomic factors. And naturally there should be such differences, because “race” and “ethnicity” are matter of long-term evolution to different environments, meaning they involve differences in gene frequencies. Some ecologies will cause you to be more adapted to fighting off flu than others. So how could there not be race differences in Covid incidence?

For example, Covid would be likely to impact heavily Native Americans in the U.S., because they never developed agriculture, meaning they were less exposed to viruses which jumped the species barrier, including flu.

And so now, what is the state of New Mexico doing—despite the fact that race is a “social construct” and biological race differences are “trivial”?  It is prioritizing the vaccine for Native Americans. .[ Vaccines reach COVID-ravaged Indigenous communities, by Morgan Lee and Carla K. Johnson, December 17, 2020]

Why? Because the “social construct” of “race” almost perfectly maps on to a biological reality and the genetic differences involved have life-and-death consequences.

Judge Leftists by what they do, not by what they say. And judge them by what they fail to do. Covering up race differences in Covid for ideological reasons will undoubtedly have cost Native American lives, because Native Americans should have been told from the beginning just how dangerous this might be for them.

In other words, I was completely right in the mantra that I began to attach to my VDARE.com articles on Covid and race:

If Covid-19 is not an Equal Opportunity disease, that means our race-denying Ruling Class is frightening most people too much—and not warning some people enough. This will not merely cause unnecessary chaos—it will cost lives.

And CNN’s showcased Indian medical talking head Sanjay Gupta was completely wrong, and criminally irresponsible, to assert dogmatically that Covid “doesn’t discriminate based on race”— the more so because this sort of political pressure stampeded governments and the Main Stream Media to suppress facts about the disease’s racial incidence that were desperately needed.

Now many other states, such as New Jersey and California, have announced that minorities, such as blacks, will be given priority access to the vaccine over whites. [REVEALED: Every single US state is being advised to consider ethnic minorities as critical groups for vaccination with HALF prioritizing black and Hispanic residents over white, Daily Mail, December 19, 2020]

This makes some sense, of course, because it has been shown that even when controlling for socioeconomic factors, dark-skinned people are more likely to die of Covid-19. (Whether it makes sense to prioritize young blacks over older at-risk whites, or for that matter not to prioritize at-risk males over women, does not seem to have occurred to the authorities),

The reason for minority prioritization is simple: They are in an “evolutionary mismatch” and this causes them to be unhealthy. With dark skin, they are evolved to a hot, sunny ecology in which the dark skin protects them from skin cancer. However, they have moved to an environment with cold, dark winters where, once you develop agriculture and so focus on one crop, light skin becomes useful because it allows to absorb UV rays from the sun and to synthesise this into Vitamin D. But if you have dark skin, you can’t do this very well. So you become Vitamin D deficient and this deficiency is central to dying of Covid-19.

Which is why, in Sweden, the mortality rate of Somalis has been substantial; Somalis who must take double the Vitamin D supplement that Swedes take in order not to be Vitamin D deficient.

Think of all the “Black Lives” sacrificed on the ideological altar of proclaiming that “race is a social construct” and biological race differences are only on “trivial” things such as skin color—which is literally far from “trivial.” But if you’re a white Leftist, then “Black Lives Don’t Matter.” Appearing morally superior—that’s all that matters.

Fascinatingly, black people are reportedly strongly resistant to having the vaccine which,  for genetic reasons, they so desperately need. They are inclined to believe in so-called “conspiracy theories” about it—far more so than whites. Almost half of blacks believe that Covid is a conspiracy, meaning they are likely to be sceptical of the vaccine . [COVID-19 Conspiracy Theories Abound, As Fallout from the Virus Exposes Inequalities, by Nigel Roberts, BKReader.com April 24, 2020]

Anyone who takes race differences seriously will be unsurprised by this. Blacks have lower intelligence than whites and lower altruism, because these factors were selected less in their historically easy and unstable ecology. The result: they are lower in trust. They are also higher than whites the scale at one extreme of which sits schizophrenia—discussed in Race, Evolution, and Behavior, by VDARE.com contributor J. Philippe Rushton. Schizophrenia is associated with believing in conspiracy theories [The Psychology of Conspiracy Theories, By Brielle Marino, Psychology Today, September 14, 2020]. So blacks are going to be resistant to the very thing that may save their lives, meaning it makes sense to prioritize them, target and disproportionately reach out to them.

Throughout the West, Christmas is basically cancelled. 2020 has been a write off.

But perhaps the single positive is that Covid-19 has smashed the world in the face with “race”—in the form both of race riots and the simple and undeniable fact that biological race differences are not “trivial.”

They are very real and ignoring them can lead to people unnecessarily dying.

There will be families this Christmas staring at empty chairs because Leftists needed to deny “race” so that they could feel “superior” to other whites.

Implicitly admitting the reality of race by prioritising black vaccines—and even then dishonestly framing it in terms of “equity”—is too little and too late for all the deaths than white Leftist have, essentially, caused.

Americans hear a lot about the “Racial Reckoning.” But what they need is a "Race Denier Reckoning”