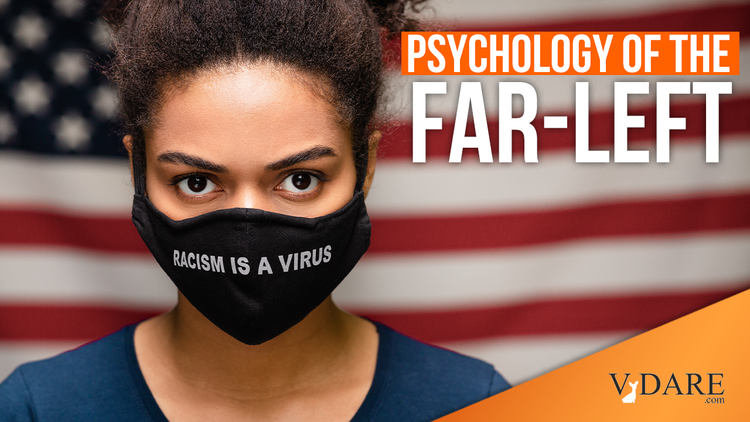 When a BLM mob surrounded an innocent diner in Washington, DC, demanded she raise her fist in “solidarity” with them, and then taunted and intimidated her for refusing to submit to them [A woman diner is tormented by Black Lives Matter mob for refusing to raise her fist in Washington DC. Isn't this how Nazi fascism began? by Dominic Sandbrook, Mail Online, August 26, 2020], the contrast couldn’t have been more stark: aggressive, emotionally-incontinent liberals against a calm, brave and dignified (probable) conservative. And the contrast seen in the nation’s capital was by no means a one-off. New research has proven that conservatives do indeed have better emotional control than liberals.

I have recently reported a growing body of studies finding that conservatives are more mentally stable than liberals, with young liberal females having the worst mental health of all. Virtue-signalling liberals are also high is psychopathic traits, one of which is an inability to regulate your emotions.

Now a recent study published in the journal Social Psychological Science has found that there are clear differences in cognitive functioning between liberals (used in the American sense of “Leftist”) and conservatives [Political Ideology and Executive Functioning: The Effect of Conservatism and Liberalism on Cognitive Flexibility and Working Memory Performance, by Bryan Buechner et al., April 10, 2020] with liberals being worse at emotional regulation.

Led by Bryan Buechner, a psychologist at the University of Cincinnati, the team hypothesized that liberals and conservatives would perform differently on tasks that involved different aspects of working memory. Conservatives, they reasoned, would perform better on tasks that required “response inhibition.” This is where you have to be able to suppress reactions which interfere with behavior which is likely to achieve a set goal. If you were told to remember something specific, this would allow you to suppress information which might cause you to alter your memory.

Conservatives, the researchers argued, are defined in part by resistance to change, liking order and structure, and following established rules. Put simply, conservatives should be better at suppressing their reactions.

Liberals, they proposed, should be superior at “response updating.” This is when you are required to revise your “mental representations” in reaction to new information. It involves suppressing and disregarding effectively outdated information and should be predicted by the liberal tendency to like change and to be open to new things.

The team conducted a number of experiments. In one, which employed an undergraduate sample, subjects had to focus on a target while ignoring a distractor that manifested on a screen.

The team checked this because intelligence is associated with “openness to experience,” so intelligence differences—rather than political differences—could have been the driving factor. Conservatives are, on average, more religious than liberals and religiousness, argue the authors, is associated with “impulse regulation,” so this could have been the causal the factor.

The researchers found, as predicted, that conservatives were superior at tasks that involved response inhibition, while liberals were better at response updating. Neither differences in religiousness nor in intelligence could explain the relationship that they had uncovered.

They also found that liberals displayed greater “cognitive flexibility” than conservatives. This was tapped into via a questionnaire which asked subjects to rate themselves on items such as “I can communicate an idea in many different ways” or “I avoid new and unusual situations.”

So, there we have it. Conservatives have better impulse control than liberals, which is why liberals tend towards childish behavior. But liberals are more willing to change the way they see things in response to new information.

Or are they? The second finding might seem to jar with other studies, which have found that liberals are actually more dogmatic than conservatives. When faced with information which challenges their fundamental worldview, it has been shown that liberals are actually more likely to dismiss empirical evidence and stick to their dogmas than are conservatives [Are Conservatives Really More Simple‐Minded than Liberals? The Domain Specificity of Complex Thinking, by L. Conway et al. Political Psychology, 2015].

This, in fact, would explain why liberals are prepared to live in a fantasy world when it comes to issues such as the causes of racial disparities in socioeconomic status.

So perhaps the liberal-conservative difference is more complicated—a difference to which this study does not do justice. This is because the study relates to mundane and unimportant “response updating”—not updating about information that is a central to your worldview.

Maybe we could argue liberals are better at “response updating” because they are less rule-bound, less requiring of structure and thus more open to new things. But when it comes to information that is fundamental to how they make sense of themselves and the world, the opposite is the case. Such challenges evoke strong emotions—feelings of helplessness and existential angst—and liberals are worse at regulating their emotions. (VDARE.com Editor Peter Brimelow made a similar point back in 2005: Why I Am a Reagan Conservative/ Immigration Reformer).

So on the unimportant things, liberals are better at response updating, but not so much on the things that really matter.

This makes sense in terms of conservative-liberal differences in personality.

However, they are also high in Neuroticism, defined as feeling negative feelings strongly [Mental Illness and the Left, by Emil Kirkegaard, Mankind Quarterly, 2020]. Thus, when a particular change challenges their worldview, such as in what scientists think about an issue, they will be overcome by feelings of anxiety in a way that is not the case with the more mentally stable conservative when an aspect of his worldview is challenged. Liberals react to this through cognitive dissonance, whereby they will become emotional and angry, allaying their anxiety by becoming even more fervently attached to their worldview.

So, this explains the paradox of liberals being more open to change but also more dogmatic when their fundamental worldview is empirically challenged.

Potentially consistent with this, and not reported in a media summary of this research back in May nor emphasized in the study itself, consulting the original paper reveals that in every experiment conducted, conservatives are very considerably better at emotional inhibition than liberals, but liberals are only a little bit better at response updating than conservatives.

This implies that a large minority of liberals are highly dogmatic and resistant to change on fundamental questions.

In this sense, in dealing with BLM protestors, we are dealing with children who happen to dwell in the bodies of fully grown adults.