Here's a science story from the Old Country.

Britain's main Progressive and anti-white newspaper over there, The Guardian, reported with much glee on February 7th that the remote ancestors of the British people had dark skin. Take that, white supremacists!

This finding comes from recent advances in our understanding of DNA. By scrutinizing a person's DNA closely enough, we can now tell fine details of his appearance, and even do a fair-probability reconstruction of his face. These techniques have been applied to Cheddar Man, a complete human skeleton unearthed in 1903 in Southwest England.

Cheddar Man lived about nine thousand years ago, which makes his people one of the earliest to return to Britain after the ice sheets melted at the end of the last glaciation. Around ten percent of modern English people are known to be descended from his group, quite possibly including your humble correspondent.

Scientists have just finished compiling a complete genome for Cheddar Man. It tells us he had blue eyes, dark skin and dark curly hair, and was lactose intolerant.

This will make great propaganda for the anti-white crowd, but it's nothing surprising to those of us who'd read Greg Cochran and Henry Harpending's 2009 book The 10,000 Year Explosion.

In Chapter Three of that book, Greg and Henry (who is alas no longer with us) argue that the switch from a hunter-gatherer lifestyle to agriculture led to vitamin D deficiency, since fresh meat has more vitamin D than cereals. Ultraviolet rays in sunlight, acting on human skin, generate vitamin D; more when the skin is lighter. Sure, too much ultraviolet will give you skin cancer; but in high latitudes like Britain's, too much sunlight is not a problem.

So after the switch to agriculture, which in Britain took place six thousand years ago, long after Cheddar Man was chasing reindeer round the tundra, light skin would have had health benefits. Natural selection took care of the rest.  From Cochran and Harpending:

Several of the major mutations causing light skin color appear to have originated after the birth of agriculture.

That's from a book published nine years ago; so this news about Cheddar Man is not sensational. 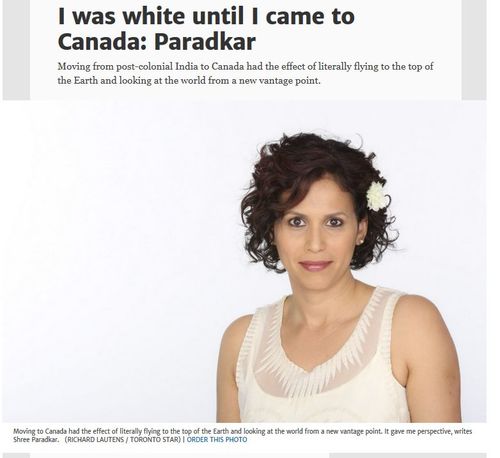 The Progressives are jumping all over it anyway. The Race and Gender columnist for the Toronto Star — yes, that is apparently an actual job, with a desk and a salary — this columnist, a person named Shree Paradkar, [right, Email her]could barely contain himself, herself, or itself. The news is, says he, she, or it, quote "worthy of chuckles and cackles," end quote. The headline on this column is How Cheddar Man shatters accepted views of immigration. Uh … okay.

One of the hardest things about debating race denialists is their fixation on skin color. "It's an insignificant thing!" they say, as if they've just discovered the Law of Gravity. "Inconsequential!" Which is kind of true. It's a marker of race, but one of many, and not essential in any classification. There are albino Africans with dead-white skin.

Race is deep ancestry. You're more closely related genetically to some groups than to others. There are some handy external markers like skin color and hair texture, but they don't do anything. What does stuff is the entire genome. By analyzing the entire genome you can predict a person's self-reported race with north of 99 percent accuracy — way better than you'd get from just looking at them.

And to speak of immigration in the context of nine thousand years ago is absurd. Immigration concerns nation-states and their laws, neither of which existed in 7000 b.c. You might as well speculate about a criminal prosecution for the guy who killed Cheddar Man by knocking a hole in his skull.

Progressives know nothing. They are ignorant and stupid. They know nothing about science and can talk in no terms other than those of early twenty-first century social obsessions. Progressives are idiots.