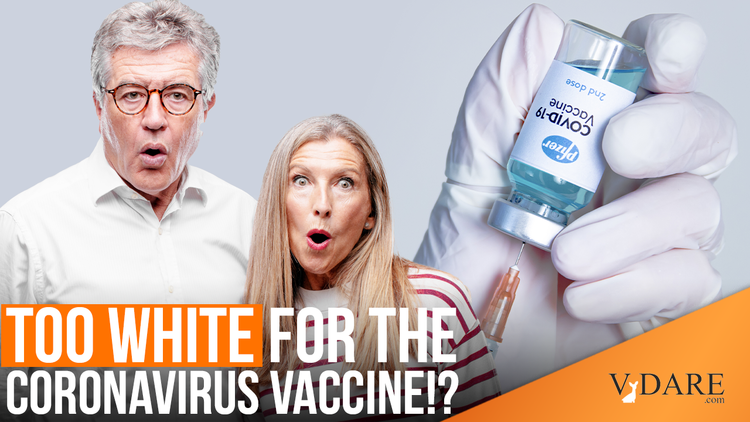 White Lives Don't Matter: Every US State Advised To Prioritize Non-Whites Over Whites For COVID Vaccination

REVEALED: Every single US state is being advised to consider ethnic minorities as critical groups for vaccination with HALF prioritizing black and Hispanic residents over white, Daily Mail, December 19, 2020

Every US state has been advised to consider ethnic minorities as a critical and vulnerable group in their vaccine distribution plans, according to Centers for Disease Control guidance.

As a result, half of the nation’s states have outlined plans that now prioritize black, Hispanic and indigenous residents over white people in some way, as the vaccine rollout begins.

According to our analysis, 25 states have committed to a focus on racial and ethnic communities as they decided which groups should be prioritized in receiving a coronavirus vaccine dose.

These include New Mexico, where collaboration with Native Americans is being prioritized; California, which has committed to ensuring black and Hispanic people have greater access to the vaccine; and Oregon, where health officials have said that ethnic minorities with have ‘equitable access’ to the shot.

Some states have made even more specific plans to prioritize communities of color, with 12 states specifically mentioning efforts to partner with healthcare providers in areas with a large minority population to reach ‘diverse populations’, according to Kaiser Family Foundation.

New Jersey and California plan to prioritize minorities by working to remove barriers to accessibility such as transportation and wait times.

Latinos make up 60 percent of Covid cases in the state, even though they are 40 percent of the population, according to the Guardian, with farmworkers being significantly effected .

White Americans–particularly white teachers and elderly whites–are expendable, an acceptable loss in the eyes of experts in health policy and ethics.