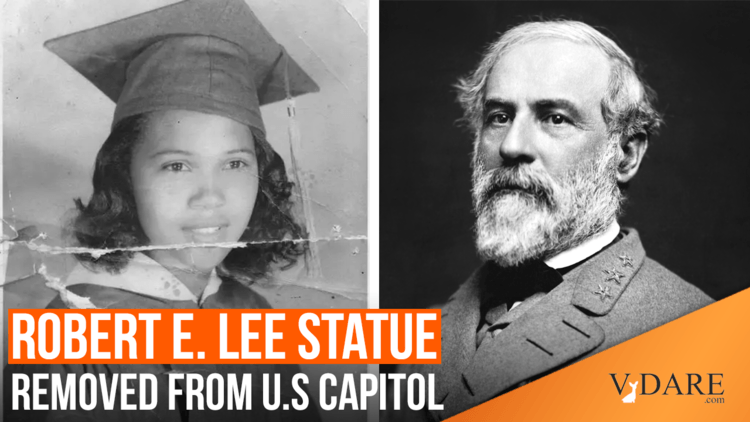 National Statuary Hall: Down With Robert E. Lee And Up With Barbara Johns (Who?)

Earlier, by Patrick J. Buchanan: Culture War In VA—Statues Of Washington And Lee To Be Replaced With...Nat Turner?

Today, Virginia removed the statue of Robert E. Lee that represented the state in National Statuary Hall in Congress for more than 100 years. Virginia Governor Ralph Northam said the general was “a symbol of Virginia’s racist and divisive history.” Nancy Pelosi called the statue an “homage to hate.” If Governor Northam has his way, a black woman—actually, a black girl—will represent the Old Dominion: Barbara Johns. Never heard of her? I hadn’t either until today, and the more you look into her, the more you understand why.

In 1951, Johns was a junior at Moton High School in Farmville, Virginia. According to her biography at the Moton Museum, she, along with some fellow students went on strike to protest the shabby facilities at their “separate but equal” school. They weren’t calling for integration, just better schools. Two days later, the NAACP agreed to help, but only if the students would demand integration, and a month later, the NAACP filed Davis v County School board of Prince Edward County. Johns was not even the named plaintiff; Dorothy Davis was a 14-year-old ninth grader. A three-judge panel dismissed the case, but the NAACP consolidated it with four other integration suits that it took to the US Supreme Court. This led to the famous Brown case that banned segregated schooling. Believe it or not, that is the extent of the accomplishments of a girl now being called a “civil rights icon.” As her biography notes, after her education she “went on to lead a quiet life:” She married a preacher and was a grade-school librarian in Philadelphia. She died in 1991. Just this month, however, she was inducted into the National Women’s Hall of Fame, along with four other women — all black — including Aretha Franklin.

When a “racist” white man is removed from a place of honor, no one ever tries to find a “non-racist” white man to take his place. Perhaps, there is no such thing, but such Virginians as James Madison or Patrick Henry or James Monroe or Lewis and Clark or Henry Clay, or Admiral Richard Byrd were never in the running. But if the rulers of Virginia were determined to find a black person—even a black woman—was this non-entity the best they could do? If I were black, I would be insulted.

If it had to be a black woman from Virginia, why not someone who accomplished something? Why not Ella Fitzgerald or Pearl Bailey? And if we could break free just a bit and choose a black man, why not Booker T. Washington, who was a genuinely admirable figure who dedicated his life to lifting up black people? No, it apparently had to be a black girl who did one thing on one day, but as Rosa Parks proved, that can be all it takes for black female stardom.

And who is the other Virginian who will share “eternal” glory in National Statuary Hall along with Barbara Johns? Just another dead white male: George Washington. I predict that before long those two will be considered far too mismatched to represent Virginia, and the slave-holding racist war-monger will have to go. Then, if our rulers can get over their sex-obsession and choose a man, I nominate that great Virginian, Nat Turner. When he decided to strike a blow for his people it wasn’t a sissy little school strike. He and 70 followers set out to “kill all the white people,” and managed to slaughter  white men, women, and children.

I’d call him a far more impressive figure than a grade-school librarian.