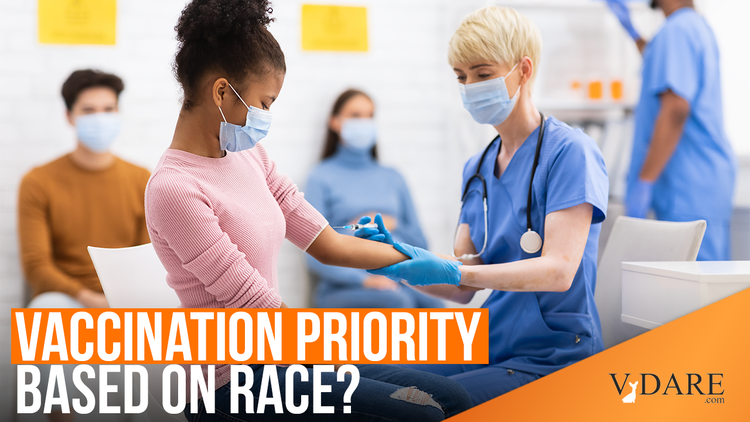 Department of Veterans Affairs Puts White Vets At Back Of Line For Vaccines. Hate Or Science?

Eugene Volokh writes that "The Department of Veterans Affairs will apparently be prioritizing "Black, Hispanic, and Native American" veterans for the coronavirus vaccine", quoting a DVA document that includes "Race and ethnicity. Data shows that some groups of people have been disproportionately affected by COVID-19. These include Black, Hispanic, and Native American communities."

Volokh goes on to say

But this would violate equal protection rights. (The Equal Protection Clause by its terms applies only to states, but Supreme Court precedents have held that similar principles apply to the federal government, including in the distribution of government-provided benefits.)

Vaccination by Race, and Why It's Unconstitutional by Eugene Volokh,  Reason.com, December 10, 2020

Lets assume that this DVA plan is based on hatred for whites.

It would seem like there are several different possible goals when drawing up a priority plan:

F. Show you care more for sacralized groups than for demonized group

The demonized group is white Americans, of course. But is there any scientific justification for such a priority?

In Race for the Vaccine Racial politics must not warp a question of public health, by Sally Satel, Persuason, November 16, 2020, Satel, who is an MD, writes

First, let’s consider what we know about risks to Blacks and Hispanics. Members of these groups are infected with the virus at three times the rate of Whites and die at least two times as often. Their risks of exposure are increased because they are more likely than Whites to work lower-paying jobs that require interaction with the public and to travel to those jobs by public transportation. Blacks and Hispanics are also more likely to live in homes with many family members sharing close quarters.

The National Academies—non-governmental institutions that offer expert advice on science policy—have proposed an allocation plan giving priority to communities that rate high on the Centers for Disease Control’s Social Vulnerability Index, which takes into account poverty, unemployment and health-insurance rates, among other socioeconomic vulnerabilities. The index would be applied to each of several priority phases, the first being healthcare workers, the second being those who are medically at risk due to concurrent illness and age, and so on.

Since certain minorities are more likely to be socially vulnerable to infection with the virus—a status with roots in past discrimination—they will disproportionately receive the vaccine early under that approach, consistent with the public-health goal of maximizing communal benefit.

But a person’s race, per se, does not put him or her at greater risk for becoming infected or dying from Covid-19. Race is a correlate but risk is the cause. Therefore, allocating the vaccine based on the moral impulse to correct past injustice would not maximize communal benefit.

What Satel is saying here is that minorities aren't experiencing differential outcomes because of their genes, but because of their behavior. Behaviors include working at low-wage frontline jobs, crowded homes,  and I would include not social distancing, and not following general sanitary guidlines, partly because many don't really get the germ theory of disease.  (The idea that differential behavior is caused by genes is not to be spoken of.)

Volokh goes on to say

And, as Hans Bader (Liberty Unyielding) notes, this means that the government must use such race-neutral alternatives, instead of using race as a proxy for risk, or using vaccination as a sort of group compensation for the disparate impact of the illness on certain racial groups. Just as the government is generally not allowed "to use race as a proxy for gang membership and violence" even in prisons, and just as "[r]ace cannot be a proxy for determining juror bias or competence," so race can't be used as a proxy for vulnerability to illness, especially when the other factors that Dr. Satel identifies can gauge risk better.

The thing is, there is a lot of scientific evidence that coronavirus varies by race:

So while I distrust the DVA's motives on this, it may be true that blacks are genetically more in need of the vaccines than whites. (Satel, by the way, ought to know this, she wrote an article called I Am a Racially Profiling Doctor for the NYT in May of 2002.) If that's true, and the government is persuaded by these arguments, it would be a case of the phenomenon I call  "Civil Rights Law Doesn't Care If You Die", but applied to blacks, for once.

That's unlikely to happen, though. Despite the Constitution, the Courts rarely uphold "Equal Rights For Whites".