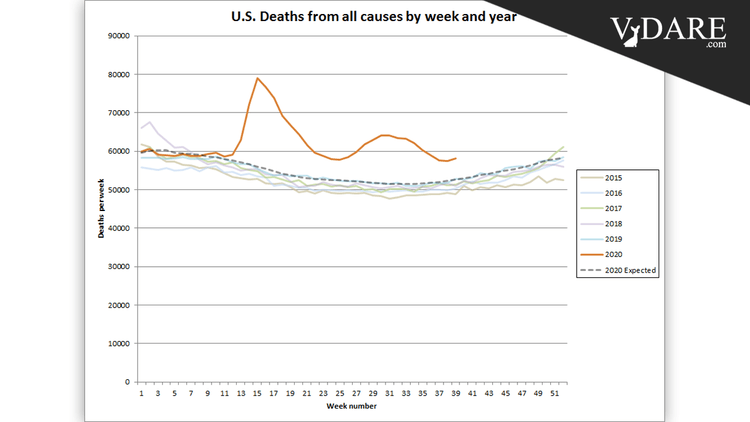 Graphing Total Deaths In The US In 2020

A couple of the graphs in my new Taki’s Magazine column “Let’s Be Over and Done in ’21” are drawn from some emails I received recently from somebody I’ve distantly known for a long time as a reliable, sensible analyst. Here’s his first email, with graphs and commentary beneath the graph (i.e., when he says, “Here is a graph” he’s referring to the graph above his text, not below).

I put together some graphs about COVID deaths and overall deaths with a little commentary here: https://imgur.com/a/JBjbJCw

You’ll have seen ones like most of them, but some may be of interest to you.I haven’t published the post anywhere yet. Maybe I’ll put in on twitter. Have I mentioned how much I hate twitter? 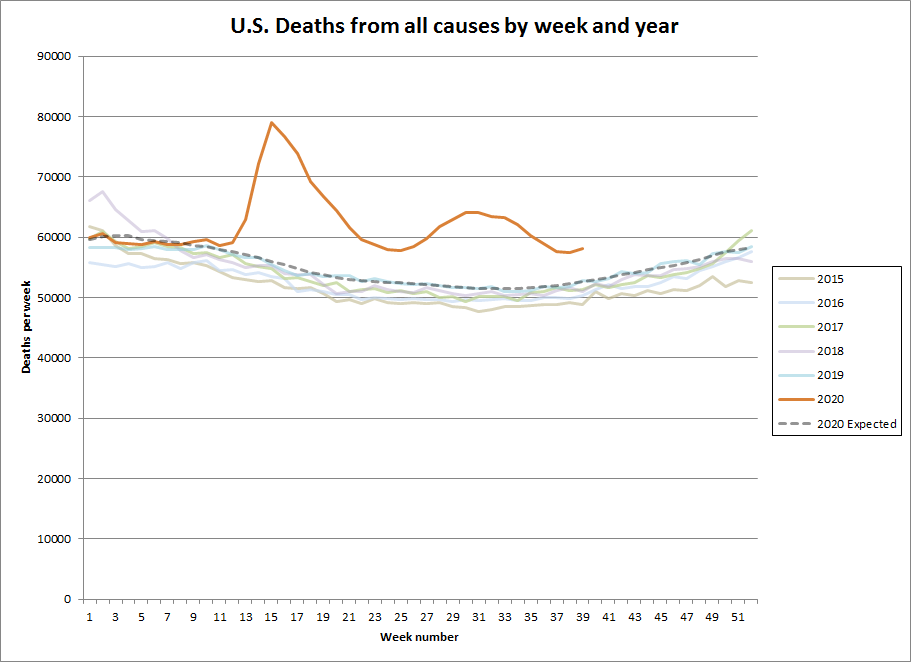 The dashed line is CDC’s “Average Expected Count” of deaths. It is a smoothed extrapolation of recent years trends in deaths. Because it is a trend analysis, it implicitly accounts for population growth and aging. The number of deaths this year is extremely elevated above the expected deaths line.

Let me point out that these graphs cautiously cut off around the end of the third quarter before the current third wave really got going over the last month or so. The CDC assigns deaths to the date on the death certificates. But it can take each state’s death certificates up to 8 weeks to trickle into the CDC. 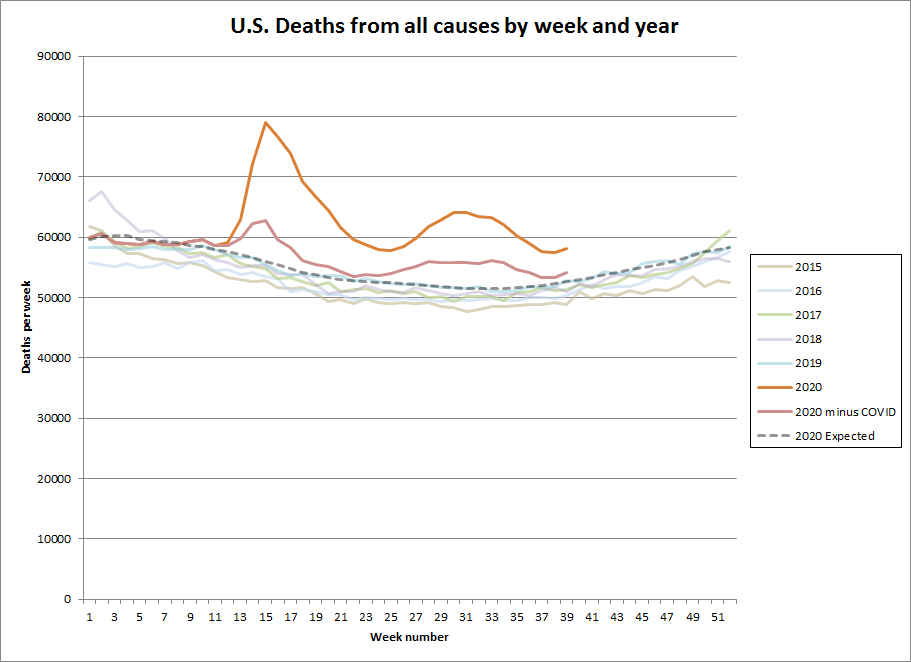 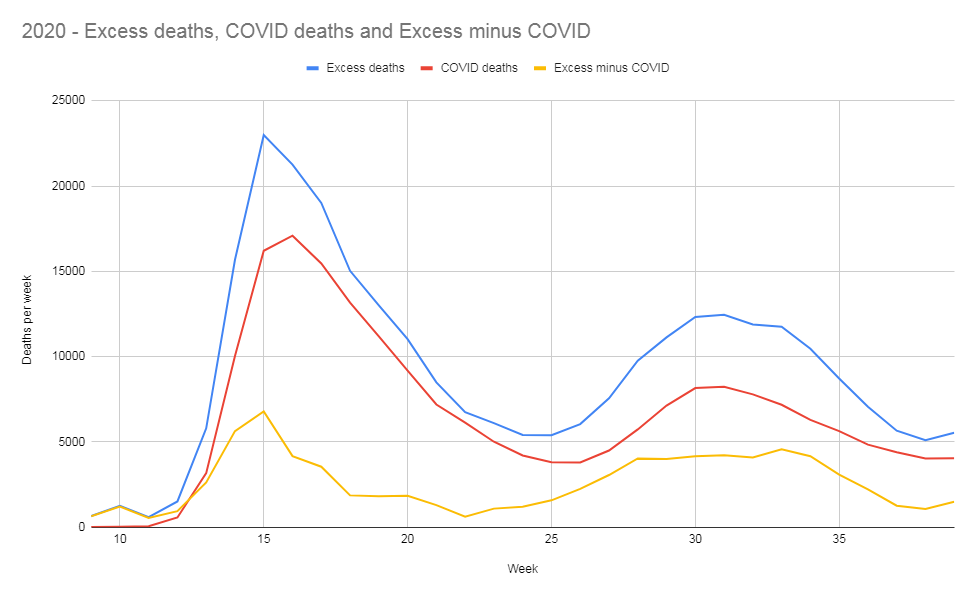 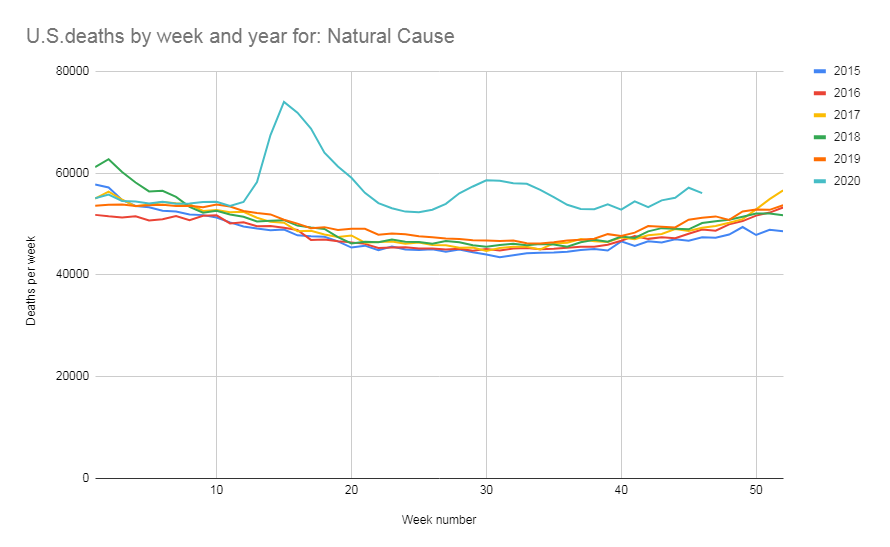 Sometimes people suggest that many of the excess deaths could be due to suicides, overdoses, etc., caused by the hardships of lockdowns. Here we graph deaths from natural causes (which excludes homicide, suicide, accidents, overdose, poisonings). The increase in natural deaths account for about 95% of the excess deaths. 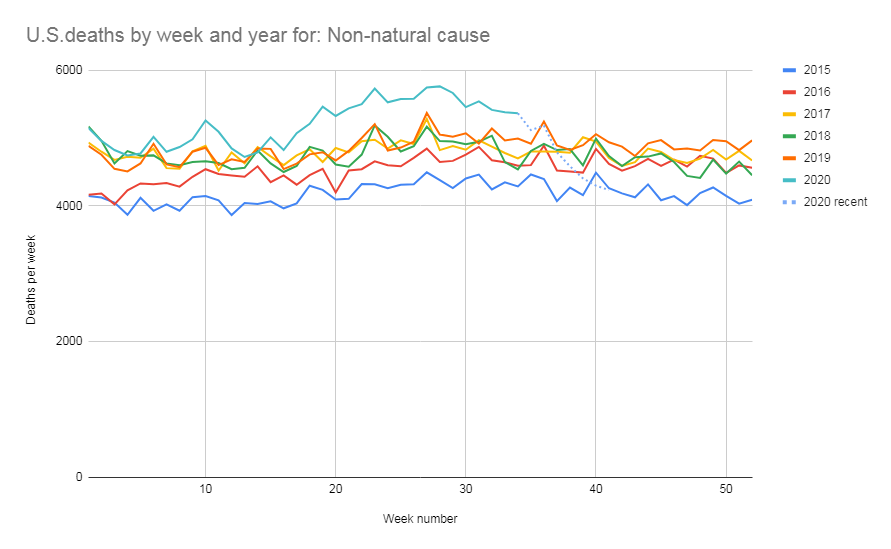 There is apparently a lot more lag in reporting of these deaths —presumably because of delays in forensic autopsies— so I put in a dashed line for numbers that will rise as more data comes in. 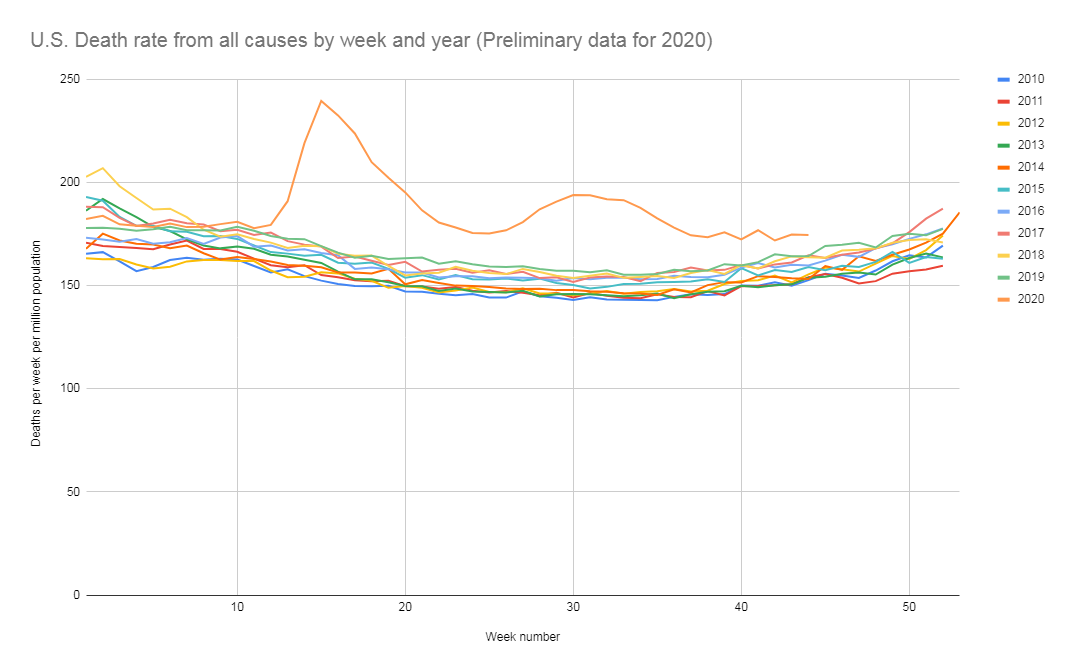 Here we have the 2020 death rate (deaths divided by population) compared to the previous decade. Anybody who says this is like a bad flu season is very wrong. 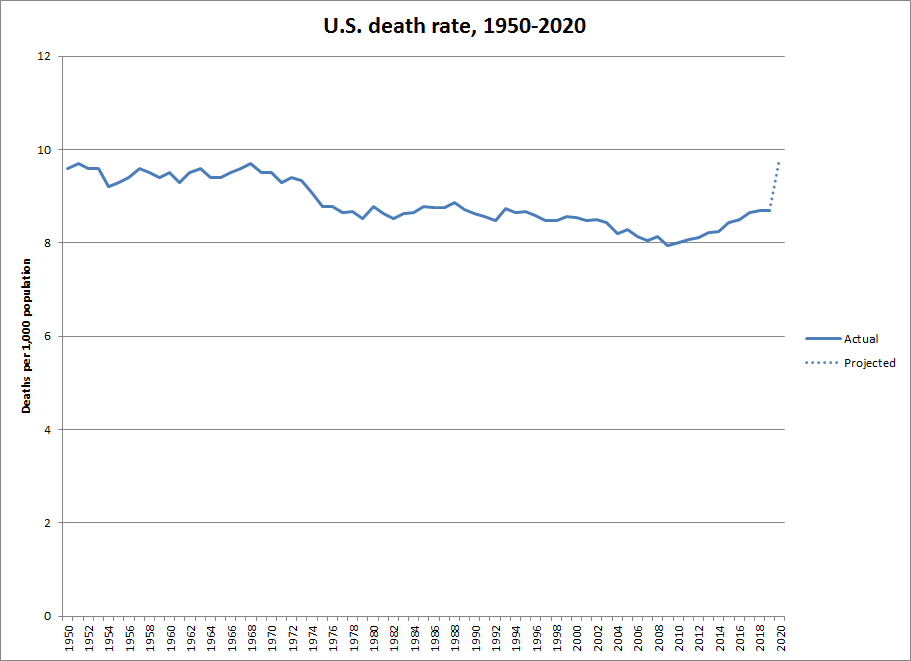 We won’t have a firm grasp on the number of deaths in November and December until February or March of next year, but the total deaths in 2020 will be at least 3.2 million and likely above 3.3 million. The death rate will jump to at least 9.8 deaths per 1,000 population and probably to 9.9 or higher. This graph shows an estimate of 9.8. This year will have the highest death rate in more than 70 years.

The one-year jump in death rates will be 13% or more. Since penicillin was invented, the highest one-year jump had been 3.5%, so 2020 is about 4 times worse than the previous worst year since World War II.

The only worse year on record is 1918, where deaths rose an estimated 29%. National records go back to 1900, but before 1933 only some states (“death-registration states”) were included.
Anyway, there are spreadsheets on Google to go with them:

And here’s a later email with some more technical analyses of common objections to the earlier work:

A couple of extra points that were not in my imgur album.

The spreadsheet “Weekly counts of death by select causes” has deaths categorized by the Underlying Cause of Death (UCOD) except for the one sheet that’s labeled “COVID-19 (Multiple Cause of Death)”.

If you’re not familiar with death certificates (I wasn’t until October), there’s a PDF about how to fill them out for COVID here: https://www.cdc.gov/nchs/data/nvss/vsrg/vsrg03-508.pdf

That’s from this page: https://www.cdc.gov/nchs/covid19/coding-and-reporting.htm

So the sheet Influenza and Pneumonia in the “Weekly counts of death by select causes” spreadsheet is only those deaths where the UCOD is influenza or pneumonia. There was an average flu/pneumonia season up through week 10, then there’s a surge of pneumonia, which is obviously undiagnosed COVID.

For most of the rest of the year the number of pneumonia deaths is very close to other years, which leads me to think that doctors are doing a good job separating COVID pneumonia from other pneumonia on death certificates.

But the CDC also publishes numbers on all deaths involving pneumonia, even when it’s not the UCOD. That is on a sheet in one of the other spreadsheets: https://docs.google.com/spreadsheets/d/1qucznpabG1aUz0GSiDbiv0-Uy16wUhxOqiEdDYHyqYE/edit#rangeid=374070885 It’s also interesting to compare the comorbidities table to a table in my spreadsheets: https://docs.google.com/spreadsheets/d/1G31ODc4eVgzg7etmcCV5SUfeFTtFYWN8YA4M3RkXYSw/edit#gid=103941076

Here are some things about flu that I have learned (I vaguely knew some of this before).

The number of reported deaths for flu (influenza on the death certificate) is much smaller than the number that the CDC estimates from a model.

Flu deaths are extremely seasonal. About 96% of flu deaths occur in 26 weeks and only 4% in the other 26 weeks.

See also this graphic from the CDC: There is a real drop in the amount of flu virus going around. See this article: https://www.scientificamerican.com/article/flu-season-never-came-to-the-southern-hemisphere1/

Flu deaths normally increase rapidly in the last week or two of December and then stay high through March. I think it will be much lower this season.