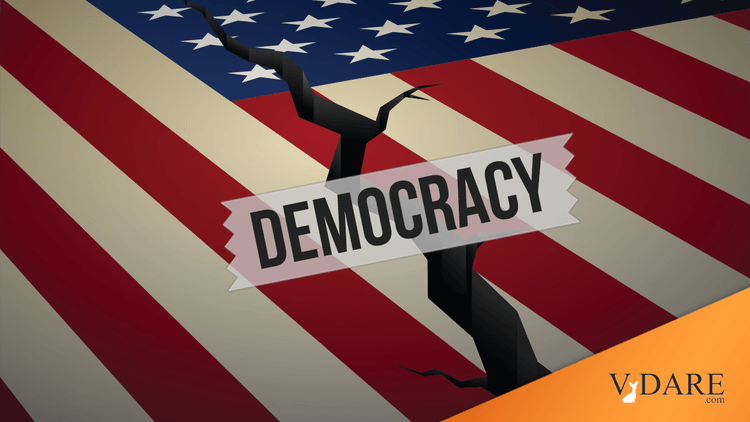 Patrick J. Buchanan: Can Democracy Hold Us Together?

If America were a company and not a country, we would have long ago dissolved the corporation, split the blanket, and gone our separate ways.

What still holds this disputatious and divided people together?

Consider. In announcing the $900 billion stimulus bill to deal with the pandemic, Speaker Nancy Pelosi did not mention that the gifts for her distressed countrymen and women at Christmas would have been twice as large had she taken President Trump's offer of $1.8 trillion in October.

Why did the speaker slap that offer away?

"The President only wants his name on a check to go out before Election Day and for the market to go up," she told House Democrats.

Sunday, however, the speaker took time for a statement to hail the removal of Robert E. Lee's statue from Statuary Hall. "Welcome news," said the speaker. "Congress will continue our work to rid the Capitol of homages to hate."

Lee had stood in a place of honor in the Capitol for decades. When exactly did the statue of the general become a homage to hate?

Both episodes point up an unpleasant truth.

Our dysfunctional American family agrees upon less and less.

This month, a Fox poll found that a third of all registered voters believe the 2020 election was stolen from Trump, with 78% of those who voted for Trump expressing that view.

In the long term, not only is the election of 2020 going to be suspect. Also, belief in one of the sacraments of secular democracy, universal suffrage, is going to suffer.

Moreover, the issues that divide us now go increasingly to the faith of what defines us as a nation and a people.

A slice of our intellectual elite emphatically agrees with the New York Times' Project 1619, which decrees that the real birth date of this nation was neither 1776 nor 1789, but the year that the first slave ship arrived in Virginia.

To this influential cohort, enslavement of Black people brought from Africa and dispossession and destruction of the indigenous tribes that European settlers found here are the defining events of our history.

And all who participated in these crimes against humanity or refused to condemn them are undeserving of exaltation.

Not only Lee, but Columbus and Presidents Washington, Jefferson, Madison, Jackson, TR and Wilson are all racist white men whose disgraceful and even criminal conduct disqualifies them from a place of honor in the American pantheon of 2020. All statues of such men need to come down to cleanse us of the stain of having honored them.

Pelosi says that such statues are "homages to hate."

She may not have thought so five or 10 years ago, but she believes that now.

What has taken place is a mass conversion.

Yet, there is another America that still cherishes the nation these men created. And, as did their fathers, grandfathers and ancestors, these Americans have shown a willingness to fight and die in her defense.

Thus do we Americans disagree on the most fundamental of issues.

Was America, is America, with all its sins and virtues and all its achievements, a country to be cherished, loved and defended? Or is America a country of whose history we should all be ashamed?

Part of America also believes that discovery in the Constitution of a woman's right to an abortion and a right of homosexuals to marry were major milestones of progress toward a more moral America.

Others see these as long strides away from the Christian country we used to be, a social and moral decline toward the same quiet death that has come to other civilizations and nations that went before us.

In short, we Americans disagree on whether our country is a good and great nation worth defending, or a place that needs a deep cultural cleansing of its sins.

And we have no common code of morality. One side is rooted in modernism and secularism and the other in the teachings of the Old and New Testament, Christian tradition and a natural law written on the human heart that is superior to man-made law.

People who disagree upon such basic beliefs naturally drift apart, as we Americans are doing today.

Political questions arise out of these fundamental differences, and they are not insignificant.

Can a republic as fractured and splintered as ours is—racially, ethnically, politically, culturally, morally—with a population who do not share the same belief about whether their nation is good and great or failed and evil, endure? And for how long?

What successful models from history do we see of nations that took the kind of risks we are taking with our republic?