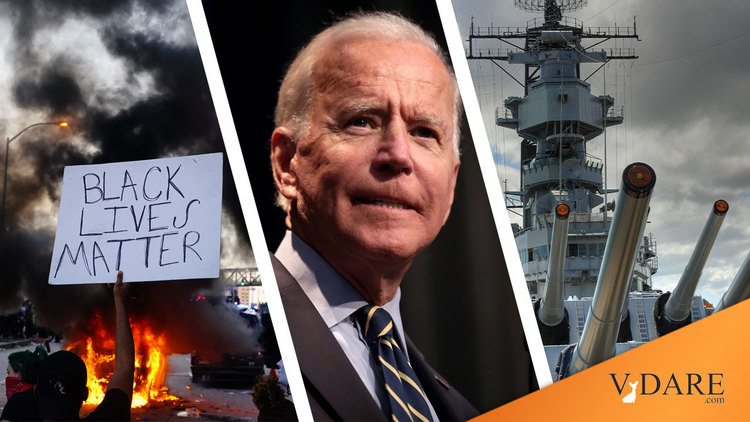 Will Whites Support A Globalist American Empire That Picks Fights Abroad And Wars Against Them At Home?

The American Ruling Class is deliberately attacking the country’s core demographic group at just the same time that it is picking fights with major powers like Russia, China, and even Turkey. The Biden Administration is demonizing whites as the main domestic threat and is developing a complicated racial caste system that punishes whites for their mere existence. Currently, an indebted, belligerent, imperialist U.S. is being propped up by naïve, well-meaning whites. But unless whites are treated better within this bizarre postmodern imperium, they will cease to identify with it and will focus on building alternatives here at home.

Of course, we must give credit where credit is due—Joe Biden is supposedly going to end America’s longest war, something President Trump tried but failed to achieve [Biden tells Americans ‘we cannot continue the cycle’ in Afghanistan as he announces troop withdrawal, by Anne Gearan, Karen DeYoung, and Tyler Pager, Washington Post, April 14, 2021]. Yet even this claim requires skepticism. Biden’s action leaves open a door for renewed commitment if there is violence this spring [Joe Biden Isn’t Ending the War in Afghanistan, by Branko Marcetic, Jacobin, April 16, 2021].

However, even bringing the troops home is certain to be coupled with a movement to bring Afghani “refugees”—and their resentments and grievances—to America [The US Must Help Afghans Who Helped It, by James Schwemlein and Earl Anthony Wayne, The Diplomat, April 8, 2021]. To make a comparison to black Americans’ “Double V” campaign in World War II,  symbolizing Victory in war and increased Civil Rights, white  Americans today get to suffer a “Double L”—losing wars overseas and Constitutional rights at home.

The unwinnable war abroad ends in a debacle that will probably bring the Taliban back to power and saddle America with refugees. Those who think such refugees will be filled with gratitude need only reference our experiences with the Hmong, the endless waves of Central Americans, or, for that matter, Rep. Ilhan Omar. Bottom line: we have been defeated abroad and occupied at home.

Moreover, it seems we’re not stepping back from unnecessary military intervention but merely pivoting. The Globalist American Empire is preparing to take on China over “human rights” [EXCLUSIVE Biden will push allies to act on China forced labor at G7 – adviser, by Trevor Hunnicutt and Andrea Shalal, Reuters, April 23, 2021]. Yet simultaneously, Biden also wants China to help with the amorphous and undefinable goal of preventing “climate change.”

Chinese leaders have no reason to actually go along with anything that would hurt its economy. [China’s Solar Dominance Presents Biden With an Ugly Dilemma, by Ana Swanson and Brad Plumer, New York Times, April 20, 2021]. Any “partnership” on tech would also lead to further American vulnerabilities thanks to America’s ridiculous policy of giving Chinese nationals access to national security secrets. It’s not surprising these Chinese side with their real country. So America is simultaneously approaching China as beggar and belligerent, and I doubt Beijing will respond with anything other than contempt.

Furthermore, China is furthering its partnership with Russia [China and Russia UNITING to test Biden: Putin and Xi seeing how US responds, by Marco Giannageli, Express, April 25, 2021]. Russia recently terrified Europe with a buildup on the Ukrainian border before coolly withdrawing forces and proclaiming it was all just an exercise [Putin Is Keeping the West Guessing and That’s Just Fine With Him, by Henry Meyer and Irina Reznik, Bloomberg, April 24, 202]. President Putin has also warned of a tough and “asymmetric” response if the United States continues to pressure his country [Putin threatens ‘asymmetric’ and ‘tough’ response to US sanctions, by Max Seddon and Henry Foy, Financial Times, April 21, 2021].

Russia is weak compared to the United States, but a united Russian-Chinese bloc would be a formidable foe [The US has been getting ‘its ass handed to it’ in war games simulating fights against Russia and China, by Ryan Pickrell, Business Insider, March 8, 2019]. Why pick this fight?

Of course, one check on the Russian/Chinese bloc would be Turkey. I suspect Turkey’s vocal support for Ukraine in the recent crisis is one reason Putin may have backed down [Turkey’s Erdogan voices support for Ukraine amid crisis, DW, April 10, 2021]. Yet the Biden Administration has just insulted Turkey by recognizing the Armenian genocide. To be clear, it was genocide. And decisive Western action against Turkey because of its weaponization of the "refugee" flow into Europe has been due for some time. However, one must ask what this declaration is really worth [Why Biden’s Armenian Genocide Declaration Really Is a Big Deal, by Charlie Mahtesian, Politico, April 24, 2021]. Washington was nowhere to be found when Turkish-backed Azerbaijani forces successfully defeated Armenia in a recent war [In Azerbaijan, Winning the War in Nagorno-Karabakh Was Easier Than Reconciling With Armenia, by Ann Simmons, Wall Street Journal, January 29, 2021]. This latest action will simply push Turkey’s Recep Erdogan into closer ties with Russia [Biden puts Erdogan under high pressure, The Arab Weekly, April 23, 2021].

It’s hard to imagine a more unlikely alliance than one between China, Russia, and Turkey, all of which have serious territorial and diplomatic grievances against each other. Incredibly, Washington seems to be creating it.

Internationally, this means America needs to be strong. However, the Biden Administration is deliberately undermining America’s own moral position, with the new ambassador to the UN helpfully explaining to the world that America is inherently racist [Why does Biden let the UN ambassador tell the world the US is racist?, by Quin Hillyer, Washington Examiner, April 17, 2021]. If that’s so, why should China or Russia suffer American lectures about “human rights?”

Washington is also gearing up for increased repression against whites. While studiously ignoring a staggering nationwide crime wave, Regime Media outlets and think tanks are circulating dubious reports about supposedly soaring white “domestic terrorism.” This provides the justification for the military to hunt for “extremists” in its own ranks [Pentagon report warns of threat from white supremacists inside the military, by Dan DeLuce, NBC News, February 25, 2021]. The American military’s readiness is already questionable [GAO report sees U.S. military readiness slipping, by Mike Glenn, Washington Times, April 8, 2021]. Making the military “woke” will hardly prepare it to meet a serious challenge from serious countries [The Meaning of the Woke Military, by Frank Bennett, American Mind, March 25, 2021].

Where does this leave American whites? The case of Army Sgt. First Class Jonathan Pentland is representative. Doing what we are supposed to do in the post #MeToo world, Pentland “listened and believed.” A woman wanted help, so he confronted a mentally ill man in the neighborhood. In a normal society, this would not be a story, unless was about how Pentland did the right thing. However, because Pentland is white and the man he confronted is black, the Army instantly turned on Pentland and denounced him. It is currently groveling and saying Pentland’s behavior doesn’t reflect “Army Values” [White Fort Jackson soldier charged in altercation with a Black man to be prosecuted in civilian courts, by Sarah Sicard, Army Times, April 23, 2021].

That’s probably right; whatever it is that the Army brass does these days, it has nothing to do with protecting Americans.

In this context, I personally find the Biden Administration’s authorization for embassies to fly the homosexual-rights Rainbow Flag on the same pole as the American flag almost commendable. It honestly shows the world what the Globalist American Empire is really all about [Biden admin. grants ‘blanket authorization’ to fly Pride flag at embassies, by Conor Finnegan, ABC, April 23, 2021].

The Rainbow Flag has real moral significance to our rulers. Burning an American flag isn’t even news; burning a pride flag, or a BLM sign, is a “hate crime.” That’s because “Americans” no longer really have an identity, while the Coalition of the Oppressed do, along with powerful interests willing to back them with money, legal protection, and officially-sanctioned violence.

Indeed, I expect that this is just the beginning. The BLM flag will probably be next at embassies (Marjorie Taylor Greene’s efforts notwithstanding). And the Pride flag, if anything, will be changed because the current one isn’t inclusive enough [Why Many LGBT People Have Started Using A New Pride Flag, by Jamie Wareham, Forbes, July 12, 2020].

Decades ago, in what seems another lifetime, I remember the feeling of personal outrage after the September 11 terrorist attacks. It wasn’t just that my country was attacked, but my cities and my friends.

In the years since, many of my friends served in Afghanistan. None I know thought they accomplished anything politically.

Now, the same blustering military chiefs who insult whites are preparing to admit defeat (though they won’t call it that) in America’s longest war.

Rather than feeling anger or shame at this national humiliation, instead I feel something like schadenfreude against them—along with righteous indignation on behalf of the countless patriots used up and spat out by a System unworthy of their sacrifice.

Corporate America, the Deep State, the journalists, and the military leadership have all made it very clear that they hate whites and want to replace them [These Key Similarities Between Lenin’s Red Terror and America’s Woke Culture Reveal Left’s Blueprint for Complete Takeover, Revolver, April 15, 2021].

Why should we try to save them from their own follies or defend their System, especially when they seem so determined to start more unnecessary wars?

We’re already being punished by having to pay taxes to subsidize our dispossession.

The only war what’s left of the Historic American Nation needs to worry about is the one being waged against it at home.