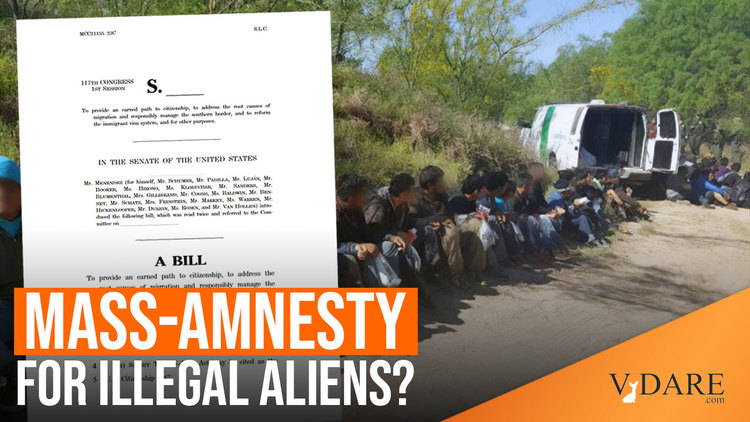 Thursday this week the Biden administration brought forth a bill on immigration. It comes in two versions, one for the Senate and one for the House, although the texts are well-nigh identical. Both versions are 353 pages long. [READ: Text of Biden-supported immigration bill, CNN, February 18, 2021]

My boss Peter Brimelow sent me the House version. I obediently settled down to read the thing.

Subsection (a) IN GENERAL.—Chapter 5 of title II of the Immigration and Nationality Act (8 U.S.C. 1255 et seq.), as amended by Section 1101, is further amended by inserting after Section 245B the following:

Paragraph (1) subject to subsection (b), satisfies the eligibility requirements set forth in section 245G(b), including all criminal and national security background checks and the payment of all applicable fees;

Paragraph (2) submits an application pursuant to the procedures under section 245G(b)(1);

At about this point, I lost the will to live. In my defense, I'll wager that I had already read more of the bill than any of the congresscritters who'll be called upon to vote on it.

I resolved to do the best I could from secondary sources—that is to say, by poaching from the commentary of other pundits more fluent in Congressperanto than I am.

My shame in this case was assuaged by seeing, as one of the first things these more knowledgeable commentators all said, that the bill stands no chance of becoming law.

Why is that? Well, here you have a conflict of strategies.

The Holy Grail for Open Borders lobbyists—which is to say, all of the well-funded business and ethnic lobbies—has always been "Comprehensive Immigration Reform." That's understood to mean a bait-and-switch model, a retread of Ronald Reagan's 1986 law giving both sides what they want: mass Amnesty to please the lobbies, firm controls on employment and border security as boob-bait for the Bubbas. Once the law's enacted, the Amnesty rolls ahead but the firm controls melt away quietly under judicial action and Executive Branch inaction.

All these efforts failed; but hope springs eternal in the Open-Borders breast. With majorities in both houses, Biden's people—how naturally we say "Biden's people," as if the President were just a holographic image, which he might as well be—figured it was time for another try at "Comprehensive Immigration Reform."

It actually isn't, though. With the Covid pandemic, caravans of thousands assembling in Central America, and doubts about Mexico's continuing fortitude in preventing those caravans crossing Mexican territory, a lot of Democratic congresscritters are getting spooked.

Here was Rep. Vicente Gonzalez, a Texas Democrat, talking this week to Politico.com:

Our party should be concerned. If we go off the rails, it's going to be bad for us. Biden is going to be dealing with a minority in Congress if he continues down some of these paths.

What to do, then? The lobbyists have to be appeased. And it would be really, really nice to have a big fat tranche of new Democrat voters in place before November 2024.

And I should say before proceeding that while I've been flinging around the time-honored expression "Comprehensive Immigration Reform" with gay abandon, this week's bill is not actually a good fit for that term, as I have defined it. Most to this point: There does not seem to be any boob-bait for the Bubbas. Where are they, those clear promises to secure the border, punish employers of illegal aliens, and the rest?

The optimistic assumption must be that the Congressional drones who drafted this bill know that we know how bogus those promises were in past efforts at "Comprehensive Immigration Reform," and decided that it wasn't worth their time to go on lying.

I call this the optimistic assumption because it does at least signal a slight increase in honesty.

The mooted solution: piecemeal reform. The magic word here is "reconciliation." Here's an explanatory quote from the New York Times:

[Open-borders activist Loretta Praeli] and other proponents … called on the President to promise that he would … use a budgetary tool known as reconciliation to enact smaller components of the legislation even as he pushes ahead with the larger effort.

Under Senate rules, legislation that significantly affects the nation's budget can be passed with only a majority vote, avoiding filibuster rules that require the support of 60 senators. With the current 50-50 Senate, that would give Democrats the ability to pass reconciliation bills without Republican support and with Vice President Kamala Harris casting the tiebreaking vote—if they can stay united.

Reconciliation is supposed to be restricted to issues of government tax and spending. But since well-nigh everything Congress does has some effect on those issues, the rules are highly fudgeable.

So although this 353-page comprehensive reform bill is, by general agreement, a dead letter, expect a strategy shift to lots of itty-bitty bills squinched through the reconciliation process to effect the desired results.

I've tried to be fair-minded in my choice of commentators: just as examples, Neil Munro (cited below)and John Binder at Breitbart.com for the Americans First viewpoint, Eugene Robinson at the Washington Post and Scott Bixby at the Daily Beast for the immigration boosters.

I have to say, though, that it's a lot easier finding commentary from the immigration patriot side than from the…other side.

Given the huge consequences for our country—for our children and grandchildren—inherent in any kind of change to immigration law, you'd think that commentators from every point of the opinion compass would be all over this week's bill.

No: take it from a guy who's been looking for good incisive commentary from all over, trying hard to suspend his own preferences when searching: America Firsters are way more interested in this bill than the Chamber of Commerce treason Lobbyists are.

OK, the Bill, Executive Summary: Crush American workers, especially white-collar college-graduate types. If there are still any deluded souls out there who look on the Democrats as the Party of the Little Guy, here's one more wake-up call for them.

This bill amply demonstrates that the Democrats, as instantiated by the current administration and its congressional cohorts, are the party of the big corporations, their Main Stream Media shills, and the college rackets hungry for foreign students paying full tuition.

The little guy, if he's a U.S. citizen, can go pound sand. This is true for both blue- and white-collar workers.

With blue-collar workers the issue is strongly linked to illegal immigration, which dominates the public conversation. This week's bill deals with illegals in a way that looks designed to be chopped up into piecemeal bills for the reconciliation process.

And notice a sneaky extra gift for illegals in the first three of those four categories—for the "Dreamers," the TPSers, and the farm workers.

They get Amnesty and Green Cards, which in the normal way of things would mean that after five years on the Green Card they could get citizenship.

However, for these favored groups—CIS estimates their numbers at 3.5 million—for them, the wait period is only three years.[Amnesty: Comprehensive or Piecemeal?, by Mark Krikorian, February 18, 2021]

Why such a trivial change? Ah, you see, if these groups can be Amnestied by reconciliation this year, they can be citizens by November 2024!

Three and a half million grateful new voters!

On the white-collar side, the bill is flagrant and ruthless. Quote from Neil Munro at Breitbart:

Biden's Amnesty bill would allow CEOs to dangle not just 75,0000 [green] cards each year—but millions of Green Cards to millions of white-collar workers around the world.

So if you are a young American just about to graduate from college, loaded down with student-loan debt, looking for a good white-collar job—fuhgeddaboutit!

The big firms won't hire you. They can get a foreign worker much cheaper with those no-limit work permits.

And while Johnny Foreigner is toiling away under that work permit, waiting the statutory period for one of those no-limit Green Cards, he is tied to the company like an indentured servant, unable to change employers.

Short title of this week's bill, as given in both the House and the Senate versions: The U.S. Citizenship Act.

As a footnote, we could fairly ask: Given that there are these two approaches to legislating immigration reform—on one hand the big "Comprehensive" bill, on the other hand the piecemeal reconciliation jiggery-pokery—why did the Trump Administration attempt neither?

It's true, and to Donald Trump's credit, that he did some effective things to secure the borders and protect American workers.

He did them by Executive Action, though, and Biden's people are now busy undoing them. There is no substitute for legislation.

So why didn't the Trump Administration legislate?

They could have tried either strategy. They could have put a 350-page bill out there with every aspect of real, patriotic immigration reform spelled out in it, to get everyone talking about it. Or they could have gone the piecemeal route, jiggling away with legislative tricks to get key things done.

They tried neither. Why?

The answer was all too plain in that sorry televised White House meeting in January 2018, which I reported on at the time.

To jog your memory, there were 25 legislators at the meeting with Trump, 16 senators and 9 house-critters, from both parties. I computed their median immigration grade as recorded by the NumbersUSA rankings: the median was between D and D-minus.

Trump was an utter squish in that meeting. The low point was when Kevin McCarthy, a NumbersUSA B-plus, had to step in to prevent Trump giving away the farm to Dianne Feinstein.

From that point on I knew it was futile to expect much good on immigration from the Trump administration. I'm surprised we got the little we did get.

Assuming, which I think is more likely than not, that this new Administration crashes and burns Jimmy Carter-style, the hope for 2024 must be that somewhere in Congress there is a mole: a senator or congressman who knows his way around the place, knows all the tricks and anfractuosities—things like reconciliation—but who has been quietly biding his time, posing as a regular swamp-compliant front man for the big lobbies, but who is a Trumpist at heart, determined to put America and Americans first, if he can get in a position to do so.

I'm going to be carefully watching the inmates of Capitol Hill this next four years in hopes of spotting that guy—or, genuflecting to my Margaret Thatcher commemorative mug, that gal.

If I can't spot him, her, or xim, I'll be buying my plane ticket to Uruguay.

Without that guy, I can't see any hope for the U.S.A.