One of the best pieces of writing advice I ever got was from @mattyglesias: conclusions are a waste of time, at least if you're writing for the Internet. Hardly anyone reads to the end anyway. When you've said what you wanted to say, just stop.

Along those lines, from the Washington Post news section:

An Army sergeant and instructor in South Carolina was charged Wednesday with third-degree assault after a video captured him shoving a young Black man and saying he was “in the wrong neighborhood,” authorities said.

Obviously, he just attacked some random black youth because he hates all blacks.

The confrontation from earlier this week near Columbia, S.C., sparked a public outcry, and protesters crowded Wednesday on the sidewalk outside the home of the soldier, 42-year-old Jonathan Pentland, who is White. The video stoked long-standing concerns about harassment faced by Black Americans, and law enforcement and Army officials condemned Pentland’s behavior as “disturbing” and as bringing “disrespect” on Fort Jackson, the large training center where he was stationed.

“We’re not going to let people be bullies in our community,” Richland County Sheriff Leon Lott said at a news conference Wednesday. “And if you are, you’re going to answer for it, and that’s what we’ve done in this case.”

The Justice Department is investigating, military officials said, and Pentland is suspended from his instructor duties while his case pends. Calling the widely circulated video “our most valuable piece of evidence,” Lott thanked the person who filmed it and urged people to work with law enforcement “to make sure that we prevent the incident that occurred on Monday from ever happening again.”

The Washington Post could not reach Pentland for comment, and it was not immediately clear whether he has a lawyer. He was arrested Wednesday morning and transferred to Fort Jackson authorities late in the evening, officials said.

Pentland has said he feared for his and his wife’s safety, and the young man is accused of earlier assaults.

In the video, posted Monday night on Facebook, a young Black man stands on a residential sidewalk near a man identified by officials as Pentland. The confrontation unfolded outside Pentland’s home, officials say.

“Go away, right now,” Pentland says in the first of many commands to leave the area.

“Call the police!” replies the young man, whom authorities declined to identify on Wednesday. Off-camera, a woman who Pentland identifies as his wife shouts that law enforcement have already been called.

Pentland asks the man, “What it is you’re doing here?” and accuses him of “aggressing the neighborhood” and then shoves him as he walks away.

The man tells Pentland that he lives in the area and is “not harassing anyone walking through the neighborhood.” The woman speaking off-camera says later that the young man “picked a fight with some random young lady that’s one of our neighbors.”

“I didn’t do anything,” the young man says at one point.

“I’m about to do something to you,” Pentland says.

The sheriff’s department said Pentland pushed the man again after the video ended, knocking a phone from the man’s hand as he took pictures of the home.

Wow, what a racist! Okay, I’m going to stop reading at this point and post this article all over social media to show how evil white people are.

Two reports of alleged assault were also made against the young man after deputies responded Monday, according to the sheriff’s department, and they are being investigated. The young man has “an underlying medical condition that may explain the behavior exhibited in the alleged incidents,” the agency said.

On April 8, one incident report says, the man allegedly put his arm around a woman’s waist, put his hand down the right side of her shorts and then put his arm back around her waist as her pants were partly down. On April 10, another report alleges the man repeatedly picked up a baby without permission and tried to walk away.

Yeah, okay, I guess he’s an insane sex criminal and baby-snatcher, but the point is, he’s black. And the guy defending women and babies is white. Anyway, I already publicly made up my mind on this so I’m not going to let some trivia about attempted rape and attempted kidnapping change my mind.

Pentland told officers who had responded to a “physical dispute” Monday that he pushed the man “in fear for his safety and the safety of his wife,” according to the incident report.

Deputies were told that the man approached “several neighbors in a threatening manner” and that someone had asked Pentland to “intervene,” the agency said in a statement.

Attempted sexual assault and attempted kidnapping are not something we should focus on when we could focus on RACISM.

“There was some other things that occurred that really doesn’t justify the actions of” Pentland, Lott said at Wednesday’s news conference. He added, “None of them justified the assault that occurred.”

“It was terrible, it was unnecessary, it was a bad video,” he added. “The young man was a victim, the individual that was arrested was the aggressor, and he’s been dealt with accordingly.”

Pentland is a sergeant first class, according to military officials. Social media accounts linked to Pentland said he was a drill sergeant and has been stationed at Fort Jackson since 2019, according to the Associated Press. A Facebook account that appears to be Pentland’s was taken down Wednesday night.

Brig. Gen. Milford H. Beagle Jr., Fort Jackson’s commanding officer, tweeted Wednesday that the “unfortunate incident” had “brought disrespect to @fortjackson our Army and the trust with the public we serve.”

Sorry to get off track, but General Milford Beagle? I’ve long had this Boy-named-Sue-type theory that prominent military figures tend to have grown up with hilarious names. 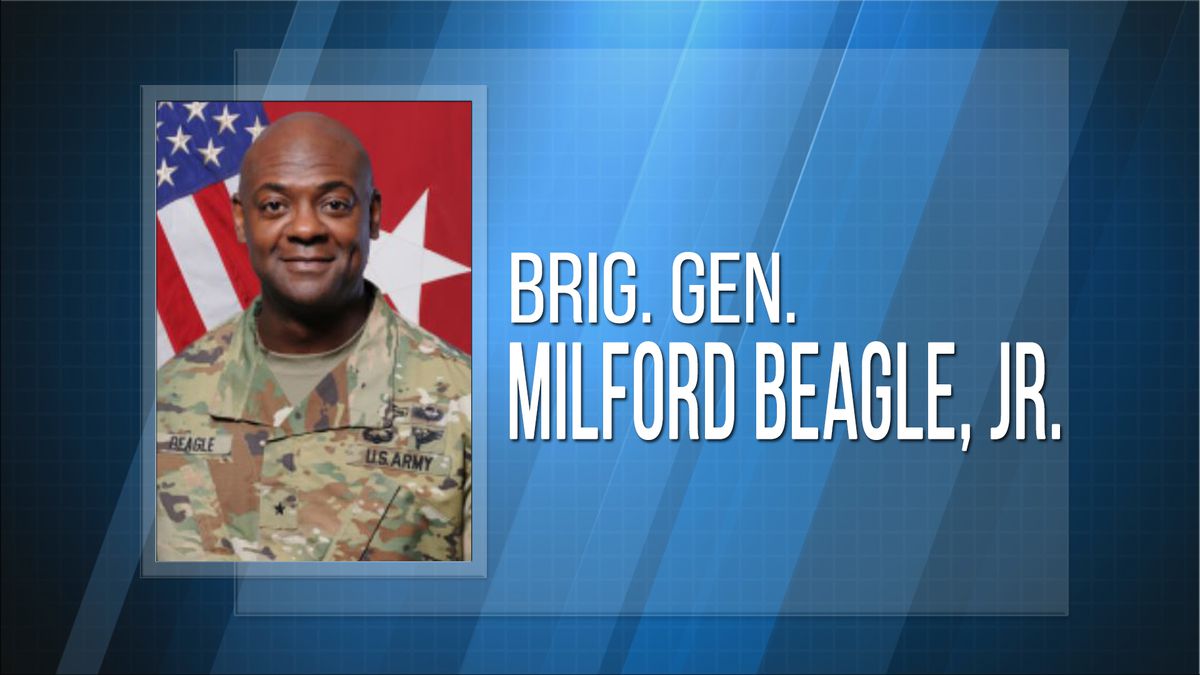 Jerry: Why do presidents all have these bad names? Woodrow, Grover, Millard …

George: The presidency attracts the badly named. Their ambition is based on personal insecurity. It’s a classic male overcompensation.

The Post goes on to quote Gen. Milford Beagle:

He promised “transparency” and shared an earlier statement that “the leaders at Fort Jackson in no way condone the behavior depicted” on the video.

Asked at the news conference about people protesting in the neighborhood, the sheriff said there was “no problem with people peacefully protesting.”

In videos shared on Snapchat and photos posted on Twitter, the crowd congregated past sunset, listening to speakers with a megaphone who spoke about racism, while deputies appeared to be monitoring the group. Two yard signs that said “Black Lives Matter” and “It’s about us” were at one point erected on Pentland’s lawn.

What started out as peaceful demonstrations became “disruptive,” a sheriff’s department spokeswoman said Wednesday evening. Deputies were called after 8 p.m. because “unknown protesters” vandalized the house, according to Deputy Sara Blann; they closed access to the street and surrounding area for nonresidents and took Pentland’s family to another location.

BLM should build a cross featuring a crucified black man on Pentland’s lawn and burn it.