Vox Day On Why Minorities Won't Vote For Less Government—Taxes Transfer (Lifetime) $384,109 From Each White Taxpayer To A "Single Black Individual"

Back in the year 2001, David Horowitz conducted a campaign against the call for reparations to blacks.

He published (or tried to publish) in college papers  ads headed Ten Reasons Why Reparations for Blacks is a Bad Idea for Blacks - and Racist Too.

One of the things Horowitz was denounced for saying was this:

Reparations To African Americans Have Already Been Paid

Since the passage of the Civil Rights Acts and the advent of the Great Society in 1965, trillions of dollars in transfer payments have been made to African-Americans in the form of welfare benefits and racial preferences (in contracts, job placements and educational admissions) – all under the rationale of redressing historic racial grievances. It is said that reparations are necessary to achieve a healing between African-Americans and other Americans. If trillion dollar restitutions and a wholesale rewriting of American law (in order to accommodate racial preferences) for African-Americans is not enough to achieve a “healing,” what will?

In 2008, I blogged about this, saying that  because of these many, many, payments, all government revenue is a form of "interracial wealth transfer, which is why African-Americans tend to be in favor of higher taxes even if they're in the upper brackets themselves. "

Now comes author/anti-SJW activist Vox Day with some numbers on the amount of the transfer, and a political point to make: 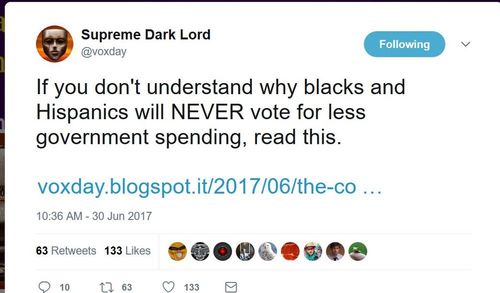 In "The Cost Of Black America" Vox writes

If you are a white American, over the course of your lifetime the federal government will, on average and on your behalf, transfer $384,109 of your wealth and income to a single black individual.

According to the data derived from the 2014 federal budget, the average annual net tax/benefit broke down as follows:

Diversity is expensive. Now you understand why you won't have much of an inheritance to leave to your children. Do you really think it's worth it? And then, those natural conservatives to the south, the Hispanics, will surely improve the situation, right? After all, immigration helps the economy! Well, not so much. [More]

So even successful, professional, minorities, who are net taxpayers themselves, will continue to vote for the Democratic policies that send money to their brothers and sisters.