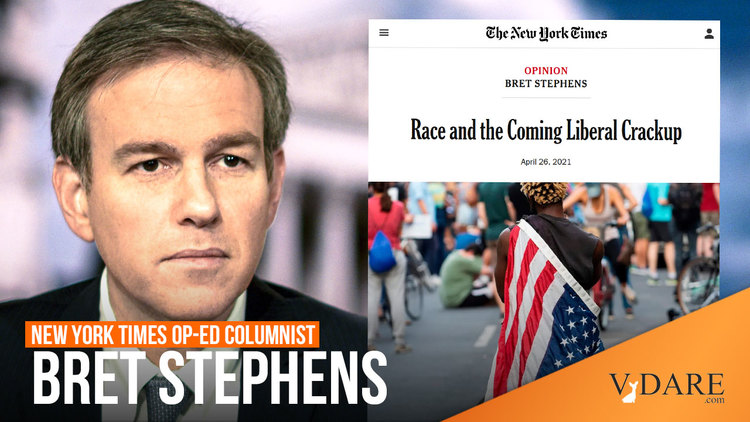 In the New York Times opinion section, Bret Stephens makes some excellent points about the outbreak of anti-white racism, if I do say so myself:

…But what about a case like that of Ma’Khia Bryant, a Black teenager who was shot and killed last week by Nicholas Reardon, a white police officer in Columbus, Ohio, at the instant that she was swinging a knife at a woman who had her back against a car?

Ben Crump, the Floyd family’s lawyer, accused the Columbus police in a tweet of killing “an unarmed 15yo Black girl.” Valerie Jarrett, the former Obama adviser, tweeted that Bryant “was killed because a police officer immediately decided to shoot her multiple times in order to break up a knife fight.” Jarrett wants to “Demand accountability” and “Fight for justice.”

An alternative view: Maybe there wasn’t time for Officer Reardon, in an 11-second interaction, to “de-escalate” the situation, as he is now being faulted for failing to do. And maybe the balance of our sympathies should lie not with the would-be perpetrator of a violent assault but with the cop who saved a Black life — namely that of Tionna Bonner, who nearly had Bryant’s knife thrust into her.

That’s a thought that many, perhaps most, Americans share, even if they are increasingly reluctant to say it out loud. Why reluctant? Because in this era of with-us-or-against-us politics, to have misgivings about the left’s new “anti-racist” narrative is to run the risk of being denounced as a racist. Much better to nod along at your office’s diversity, equity and inclusion

C’mon, Bret, in for a penny, in for a pound: call it “diversity, inclusion, and equity.”

sessions than suggest that enforced political indoctrination should not become a staple of American workplace culture.

And yet those doubts and misgivings go to the heart of what used to be thought of as liberalism. The result will be a liberal crackup similar to the one in the late 1960s that broke liberalism as America’s dominant political force for a generation.

You know, I was just thinking about LBJ and “Joe Biden’s Long Hot Spring.”

… Above all, liberalism believes that truth tends to be many-shaded and complex. Anti-racism is a great simplifier. Good and evil. Black and white.

This is where the anti-racism narrative will profoundly alienate liberal-minded America, even as it entrenches itself in schools, universities, corporations and other institutions of American life.

You may have an excessively high opinion of liberals, Bret. This whole John Stuart Mill tradition of having high principles is kind of a drag, and when given the chance to just simplify public life into Good Guys vs. Bad Guys, which you can tell from how many Intersectional Pokemon Points they have, many liberals have jumped at it.

It’s possible to look at Floyd’s murder as the epitome of evil and not see a racist motive in every bad encounter between a white cop and a minority suspect, including the recent shootings of Adam Toledo in Chicago and Daunte Wright in Minnesota. It’s possible to think that the police make too many assumptions about young Black men, sometimes with tragic consequences, and still recognize that young Black men commit violent crimes at a terribly disproportionate rate. It’s possible to believe that effective policing requires that cops gain the trust of the communities they serve while recognizing that those communities are ill served when cops are afraid to do their jobs.

It is also possible to recognize that we have miles to go in ending racism while also objecting to the condescending assumptions and illiberal methods of the anti-racist creed. The idea that white skin automatically confers “privilege” in America is a strange concept to millions of working-class whites who have endured generations of poverty while missing out on the benefits of the past 50 years of affirmative action programs.

Similarly, the idea that past discrimination or even present-day inequality justifies explicit racial preferences in government policy is an affront to liberal values, and will become only more so as the practices become more common. In Oakland the mayor backed an initiative that was to provide $500 a month to low-income families, but not if they were white. In Vermont, the state has given people of color priority for Covid vaccines.

As I may have mentioned, I run iSteve fundraisers in April, August, and December.