If you Google “Black Confederates,” you will know a lot about Google’s politics. It is also obvious that there is a tremendous effort to dismiss the idea that blacks would implicitly resist and even explicitly take up arms against the 1861–1865 Northern invasion of the South. Of course, the demonization of the South and anything remotely tied to the Confederacy, not least the destruction of Confederate monuments, is just part of currently surging anti-white politics and the drive to rewrite all of American history.  Yet the existence of Black Confederates is actually not surprising: they were typically teamsters—the forerunners of the black truck drivers of the Red Ball Express in the still-segregated U.S. Army during World War II—and other parts of the logistical tail that all armies depend upon. Still, it’s unquestionably a politically incorrect embarrassment that the Confederate armies were apparently able to rely upon these slaves until the very end of the war—just as throughout the war there were no slave insurrections (as distinct from runaways) anywhere in the South. 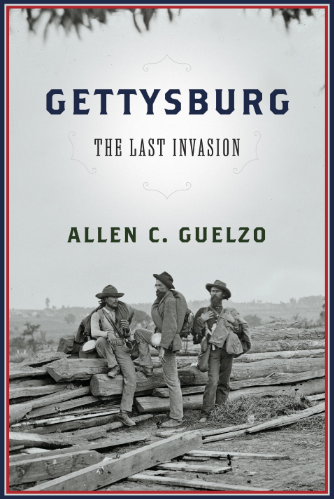 Thus, for example, Allen Guelzo in his account of Robert E. Lee’s retreat from defeat at Gettysburg in The Last Invasion:

[The Confederates] temper was darkened still further by the miseries of having “to stand & wait for an hour or more” on roads “blocked up with troops,” and by the unearthly screaming, shrieking, weeping, moaning, “oaths, and execrations” which arose from the army’s ambulances as the “wagons kept the road” and the uninjured survivors “marched through the fields & woods on each side.” Occasionally, there would be “a brass band on the side of the road … playing ‘Dixie’ & ‘Maryland,’ ” but this did not do much to drown out the cries heard by John Imboden from thousands of voices in the backs of jolting wagons and ambulances: O God! Why can’t I die? … My God! Will no one have mercy and kill me and end my misery? … Oh! stop one minute and take me out and leave me to die on the roadside … I am dying! I am dying! My poor wife, my dear children! What will become of you? [Union commander George] Meade’s hesitation gave both parts of Lee’s army a full day’s grace, but since the wagon trains alone occupied anywhere from fifteen to twenty miles of road, the likelihood of Lee putting any great distance between himself and pursuit was dim. [Emphasis added].

But the Army of Northern Virginia did escape this desperate situation–with the help of its black teamsters, who apparently went back to the South with it.

To illustrate how important teamsters were to both armies, leaving Atlanta on his mission of Confederate devastation through Georgia, South Carolina, and North Carolina, Sherman had 60,000 men, 6,300 wagons, 900 ambulances, 36,500 horses—and 36,000 mules. 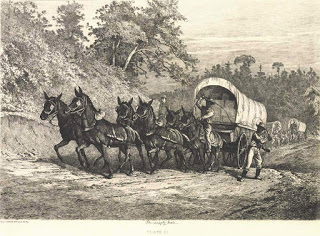 The typical Army wagon was about 10 feet long, 4 feet wide, and 2 feet deep with a canopy. It weighed about 1,000 pounds. Four mules could pull an additional load of 2,000 pounds, and six mules, which were preferred, could manage 3,000 pounds on a 15-mile trip. The average load was about 2,650 pounds.

Confederate teamsters were actually paid directly or through contractors by the Confederate government rather than the Army, at the same rate as Confederate privates, $11 per month. They often came under Union fire, and were usually armed for self-defense. Blacks were also widely used as teamsters by the Union Army.

Teamsters usually rode on the left-rear mule rather than on the wagon.  The mule was the logistical backbone of both the Confederate and Union armies. Both horses and mules are very strong, but horses are faster, braver, and more agile.  However, mules are stronger; more sure-footed, have much greater endurance, and require less rest. Mules are also less prone to injury and less expensive to keep. Mules do not spook easily, but their acute sense of danger made them less suitable for use around the deafening sounds of artillery. The mule’s reputation for stubbornness is actually related to his greater instinct for survival. Physical punishment just makes them more stubborn. Many observers consider mules more intelligent and good-natured than horses. Cavalry, artillery, ambulances, officers, and various special personnel usually used horses. (As of 2020, the Army is still training Special Forces in the use of mules for service in Afghanistan.) 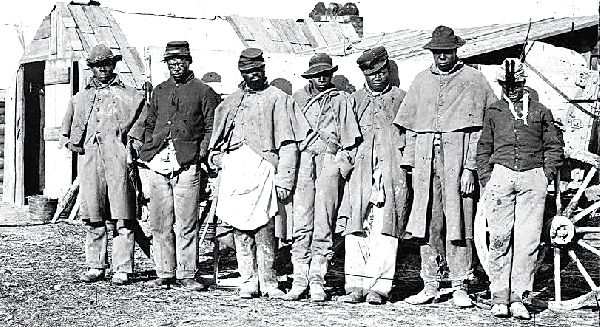 The presence of blacks in the Confederate armies in any capacity was very distressing to Northern observers. Thus on September 10, 1862, seven days before the bloodiest battle in American history at Antietam (Sharpsburg), Dr. Lewis Steiner, Chief Inspector of the United States Sanitary Commission, a relief agency for the Union’s sick and wounded, recorded in his diary Stonewall Jackson’s occupation of Frederick MD:

Over 3,000 Negroes must be included in this number. These were clad in all kinds of uniforms, not only in cast-off or captured United States uniforms, but in coats with Southern buttons, State buttons, etc. These were shabby, but not shabbier or seedier than those worn by white men in the rebel ranks. Most of the Negroes had arms, rifles, muskets, sabers, bowie-knives, dirks, etc., they were supplied in many instances with knapsacks, haversacks, canteens, etc. They were seen riding on horses and mules, driving wagons, riding on caissons, in ambulances, with the staff of generals, and promiscuously mixed up with all the rebel army. [Emphasis added].

[History of Western Maryland: Being a History of Frederick, Montgomery, Carroll, Washington, Allegany, and Garrett Counties from the Earliest Period to the Present Day; Including Biographical Sketches of Their Representative Men, Volume 1, by John Thomas Scharf, Genealogical Publishing Company, 1968]

Most of these blacks were certainly teamsters and support personnel—cooks, servants, laborers, etc. But adjusting considerably for Steiner’s tendency to overestimate Lee’s forces, Scott K. Williams estimated that 65,000 blacks served in the Confederate Army through the war—with at least 13,000 in direct combat [Black Confederates Heritage, Sterling Price Camp 145, Sons of Confederate Veterans, 1998]. The late Anthony Hervey, founder of the Black Confederate Soldier Foundation, offered a figure of 100,000. When I crunch the data, I get at least 75,000, 30,000 of whom were teamsters. In December 1864, Confederate President Jefferson Davis requested drafting 40,000 slaves from the plantations to be teamsters. This was controversial and scarcely implemented, but it puts my teamster estimate in the ballpark.

Naturally, however, it was the idea that Southern blacks were actually shooting at them that most outraged Northern abolitionists—as it outrages Leftists today.

The Northern Exchange angrily editorialized about blacks after First Manassas:

The war has dispelled one delusion of the abolitionists. The Negroes regard them as enemies instead of friends.  No insurrection has occurred in the South—no important stampede of slaves has evinced their desire for freedom.  On the contrary, they have jeered at and insulted our troops, have readily enlisted in the rebel army and on Sunday at Manassas, shot down our men with as much alacrity as if abolitionism had never existed. Indiana State Sentinel, Volume 21, Number 10,Indianapolis, Marion County, July 31, 1861.

In 1863, Horace Greeley, the famous abolitionist and founder and editor of the New York Tribune, argued that Lincoln should enlist black soldiers to fight because the South had done so:

For more than two years, Negroes have been extensively employed in belligerent operations by the Confederacy. They have been embodied and drilled as rebel soldiers and had paraded with white troops at a time when this would not have been tolerated in the armies of the Union.

[The Politically Incorrect Guide to The South: (And Why It Will Rise Again), by Clint Johnson]

In September 1861, former slave Frederick Douglass,wrote down what he told President Abraham Lincoln about black Confederates:

There are at the present moment, many colored men in the Confederate Army doing duty not as cooks, servants and laborers, but as real soldiers, having muskets on their shoulders and bullets in their pockets ready to shoot down loyal troops and do all that soldiers may do to destroy the Federal government.

Perhaps a significant case study: General Nathan Bedford Forrest took 45 of his slaves into his Tennessee cavalry regiment, as he testified to Congress after the war [See “First With the Most” Forrest, by Robert Selph Henry]. Most were teamsters. But no less than seven served in his elite escort company, Mitcham reported in his biography of Forrest, Bust Hell Wide Open. Forrest praised their performance and loyalty and freed 44 before war’s end.

All Americans need to stand against 2020’s Cultural Marxist nightmare, which is quite capable of destroying our country and the last vestiges of freedom and moral reason.

Mike Scruggs [Email him] is the author of two books: The Un-Civil War: Shattering the Historical Myths; and Lessons from the Vietnam War: Truths the Media Never Told You, and over 700 articles on military history, national security, intelligent design, genealogical genetics, immigration, current political affairs, Islam, and the Middle East.

He holds a BS degree from the University of Georgia and an MBA from Stanford University. A former USAF intelligence officer and Air Commando, he is a decorated combat veteran of the Vietnam War, and holds the Distinguished Flying Cross, Purple Heart, and Air Medal. He is a retired First Vice President for a major national financial services firm and former Chairman of the Board of a classical Christian school.