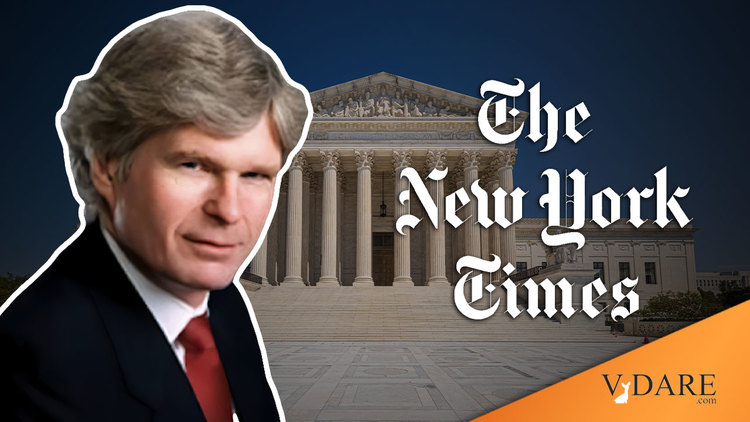 Will SCOTUS Uphold The NEW YORK TIMES’ License To Lie?

“The Supreme Court is going to revisit SULLIVAN,” a noted First Amendment lawyer told me when we were thinking about whether to petition for certiorari over the Second Circuit’s very disappointing October 21, 2021 decision (21-66-cv (2d Cir. Oct. 21, 2021) in Brimelow vs. New York Times. “But not for you.”

So much for Equality Before The Law.

SULLIVAN is the 1964 decision in which the SCOTUS (Earl Warren, proprietor), in order to get some Black Civil Rights activists off the hook, broke with other Common Law jurisdictions like Canada and the U.K. and proclaimed that publishing falsehoods against politicians (later expanded to nearly all public figures) was not actionable unless knowing falsehood or reckless disregard of the truth was shown. I discussed its disastrous consequences when I announced our suit against the New York Times two years ago: The Sin Of SULLIVAN: Why Donald Trump, Tulsi Gabbard and I Are Suing For Libel, April 3 2020. Essentially, SULLIVAN has given the Corporate Media a License To Lie about public figures, contributing (among much else) to the current savage polarization of American public discourse.

Recently, it’s become increasingly clear that the Kritarchy and the legal profession in general is having quiet qualms about SULLIVAN—see here and  here. [Clarence Thomas is right: Here's why Supreme Court should revisit libel law overreach, by Glenn Harlan Reynolds, USA Today, February 28, 2019] (Of course, we might reasonably ask why our democratically-elected legislators aren’t ADDRESSING THIS ISSUE THEMSELVES AND DOING THEIR JOB. But this seems to be the way politics works).

Despite our Noted First Amendment Lawyer’s warning, we stubbornly, and at fantastic expense, have filed a petition for our Writ of Certiorari to the SCOTUS [PDF]. We have recently learned this case is scheduled to be discussed, along with our Colorado Springs case, on Friday February 25.

It could be accepted, rejected, or held over. We may not know for some time.

So why did we go ahead in the face of almost universal skepticism?

In its 2019 article by Trip Gabriel A Timeline of Steve King’s Racist Remarks and Divisive Actions,  the New York Times accused me of being an “open white nationalist.” But this is a factual question, not a matter of opinion. I may be, in the New York Times’ opinion, a “white nationalist”—but I’m not “open.” I’ve repeatedly disclaimed it i.e. here.

That’s my personal position. About VDARE.com, I said in 2006 in our FAQ response to VDARE.COM "White Nationalist”? —

Like the immigration reform movement in general, [VDARE.com] is a coalition, agreed only on the need for immigration reduction. We have published writers of all races, and most political tendencies—including self-identified "progressives." Much of VDARE.COM is devoted to technical analyses of immigration's economic impact—for example Edwin S. Rubenstein's demonstration that jobs in the post-2002 recovery have gone disproportionately to immigrants, while black unemployment has actually risen. (See The Employment Bus: Immigrants Drive, Blacks Sit in the Back, June 22, 2006) We are certainly politically incorrect—but the merest glance would show that we are not "white nationalist."

Now I will boldly go etc. We also publish on VDARE.COM a few writers, for example Jared Taylor, whom I would regard as "white nationalist," in the sense that they aim to defend the interests of American whites. They are not white supremacists. They do not advocate violence. They are rational and civil. They brush their teeth. But they unashamedly work for their people—exactly as La Raza works for Latinos and the Anti-Defamation League works for Jews. [Note: Jared Taylor subsequently abandoned the term "white nationalism" as too hopelessly smeared].

And the New York Times even tacitly admitted its error by stealth-editing Trip Gabriel’s article on its website so that I was described merely as a “white nationalist,” while adding a link to the Southern Poverty Law Center’s article on me, equally libelous but under SULLIVAN impossible to litigate.

Quite obviously, the New York Times knew it had gone too far.

But it arrogantly refused, contrary to its published ethical standards [We Stand Corrected: How The Times Handles Errors,  by Rogene Jacquette, NYT, June 7, 2018], to acknowledge in print that it had made this change.

From my point of view, the high point of our litigation was when Katherine Polk Failla, the District Court judge, acknowledged that this factual point was “actionable.”

But she also claimed that the New York Times had made me whole with its Stealth Edit. Obviously this is absurd, even apart from the fact that it contradicts the New York Times’ published ethical standards (see above). Without a public admission in print, how would Rep. Bobby Rush, who read the original libel into the Congressional Record [January 16, 2019], know to substitute a corrected version?

More reasons we went ahead:

Lawyers always tell clients to avoid trials because you never know how they might go. This is particularly true with SCOTUS. Justices Clarence Thomas, Neil Gorsuch and (yes!) Elena Kagan have indicated concerns about SULLIVAN.

Maybe we’ll get lucky. We won’t know unless we try. Certainly our petition aims to dispel the myths surrounding the Sullivan decision, including the absurd but oft repeated notion that it was a worthy strike against “seditious libel.” In reality, it was a strike against critics of SCOTUS itself, a point few others have made in their criticism of the Sullivan rule.

And the current Woke a.k.a. communist triumph in public discourse is critically dependent on good people i.e. us doing nothing.

The process by which the Kritarchs and the legal profession in general changes its mind on anything is obscure (particularly to someone who thinks like I do that politicians should just debate issues and pass laws about them). But it appears to involve contending law review articles and opinions by judges. Thus It took many years of unsuccessful litigation before the SCOTUS felt bold enough to issue its highly controversial Brown vs. Board decision banning school segregation.

But cases have to be brought to give judges a chance to opine and law professors something to analyze. One of our advisers likened the process to water building up behind a dam. VDARE.com is contributing to this buildup, just like (but in humbler way) as the admirably combative Sarah Palin, who on discovery in her libel case was able to find devastating New York Times internal emails that to a layman clearly demonstrate deliberate disregard of the truth[Judge: Sarah Palin seeks new trial in defamation lawsuit, AP, February 23, 2022 ]

If necessary, VDARE.com’s attitude will be that of a well-known mid-Twentieth century politician:

I may not get there with you. But I want you to know tonight, that we, as a people, will get to the Promised Land.

Because SCOTUS focuses on questions of law rather than questions of fact, our petition for cert did not address Judge Failla’s obvious mistake in claim that the New York Times had repaired my reputation when it stealth-edited “open white nationalist” to become “white nationalist,” adding a hyperlink to characteristic smear of me by the communist Southern Poverty Law Center (SPLC). As a non-lawyer, I find this puzzling and I regret it.

The SPLC, however, made its case that I was a “white nationalist” by Point-And-Sputtering at VDARE.com’s publishing articles of the scientific evidence for racial differences in IQ. Accordingly, our brief argues that such evidence does exist, is entirely legitimate—and has even published in the New York Times itself, for example by its long-time science writer Nicholas Wade.

The fact of race differences in IQ does not appear to have been cited in litigation for some 70 years. But ironically, NAACP attorney Thurgood Marshall repeatedly noted it while arguing Brown vs. Board—claiming, however, that it was the result of segregation and that the black-white gap would disappear if segregation were eliminated.

(This has not happened, by the way).

Needless, allowing the fact of racial differences into litigation and into policy debate would be revolutionary. It would undercut the whole entire Racial Reckoning racket, which is based on the claim that any inequality in results must be caused by unequal treatment, sweep away two generations of Disparate Impact legislation, in which corporate lawyers were apparently too cowardly to make the argument, and cast a new and searing light on contemporary controversies from football coaches to publications in academic journals.

It would take very courageous judges. But that is why they have lifetime tenure.

My reaction to our Colorado Springs litigation has been increasing shock, as courts found various specious reasons to deny us slam-dunk First Amendment rights that I understood had been settled in the Civil Rights Era.

But the New York Times case has just infuriated me. The paper’s arrogance, dishonesty and malevolence are simply beyond words. Who does it think it is? Why doesn’t it have to follow the rules of checking with victims, not compounding calumnies during litigation, and acknowledging all errors publicly and honestly, that I was taught, during 40 years in the Mainstream Media, were essential parts of the defense to libel?

Who elected the New York Times to decide who can participate in public debate by pronouncing on their reputation over all their rational arguments to the contrary?

(For that matter, I am unimpressed with the competence and courage displayed by judges we have dealt with—including, alas, some Trump appointees).

Fortunately, our heroic donors agreed—I wonder if the New York Times realizes how remarkably unpopular it is. So we have been able to carry this through to this critical point.

By the time you read this, it may all be over. But we have given it all we have. And I’m glad.