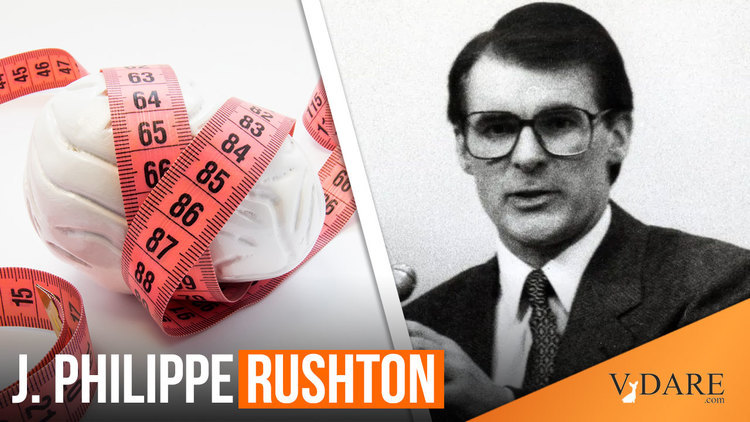 One day in 1981, I was standing in front of UCLA's Royce Hall, when I noticed two young men walking toward me across the huge open quad. "Hey!" I said to myself. "There's something you don't see very often at UCLA. That tiny fellow talking to the normal-sized guy is a genuine midget." Then, another young man walked up to the pair. "Wow! Now there's two midgets with that regular guy," I thought. "What are the odds of that?"

Highly unlikely, I suddenly realized, as I underwent one of those gestalt snaps, like where the vase in the picture suddenly becomes two faces in profile. Now that there were three people, it became clear to me that the two "midgets" were six-footers and the "normal-sized guy" was 7'-3" 290-pound Bruin basketball center Mark Eaton (who later became a league-leading shot blocker for the Utah Jazz).

When I think about race, I'm frequently reminded of that lesson I learned in the difficulty of accurately comparing X to Y without a Z to provide perspective. Not many other writers on race seem to have learned it, though, judging by the proliferation of essays comparing blacks to whites with no third race included as a control group. Andrew Hacker's 1995 book Two Nations: Black and White, Separate, Hostile, Unequal is a classic bad example.

Last week, I pointed out that another typical problem that makes most American books and articles on race so much less insightful than they ought to be is the near universal assumption that African-Americans couldn't possibly have brought over any cultural traits from Africa. As an example, I showed how Harvard Law professor Randall Kennedy's relatively good book "Interracial Intimacies: Sex, Marriage, Identity, and Adoption" could have been improved by discussing the continuity between African and African-American attitudes toward adoption and foster care.

Kennedy's other main topic, interracial marriage, provides an excellent example of the midget-giant problem in action. Kennedy is concerned about why black men are so much more likely to marry white women than black women are to marry white men. Because the 2000 Census results on interracial marriage still haven't been released yet, and the Census Bureau's annual estimates are worthlessly erratic due to small sample sizes, the best estimate we have is from the old 1990 Census. There were 2.5 times more black husband-white wife marriages than white husband-black wife marriages. But, Kennedy's explanations tend to spin their wheels because he's just comparing blacks to whites without a control group to anchor his theorizing.

In contrast, in 1997 I wrote a National Review article on interracial relations called "Is Love Colorblind?" [VDARE.Com  note - can the post- purge Goldberg Review be imagined publishing anything similar, unless of course specifically aimed at Arabs?] It's well enough known among people interested in the subject that even now I regularly receive emails asking for dating advice (which is pretty funny—the only lesson I learned is "Get married—it's a lot less painful than dating"). The reason my article remains a touchstone on the topic is because it considered interracial dating among blacks, whites, and East Asians. I pointed out:

From this, I was able to come up with a powerful yet parsimonious explanation for the "dating disparities," which I invite you to read.

Like the midget-giant gestalt, "Is Love Colorblind?" grew out of my two years at UCLA from 1980-1982. Just by standing on a street corner in Westwood on a Saturday night watching couples go by, it was obvious that black men were more in demand than black women and Asian women more than Asian men.

In fact, a more general pattern was readily visible among UCLA students: on a wide variety of quantifiable measures—whether grades, athletics, popular music skills, classical music skills, etc.—the averages for blacks and East Asians wound up at opposite ends with whites in the mediocre middle. Every UCLA student to whom I mentioned this observation agreed that that was indeed the general pattern: black—white—East Asian.

More than a decade later, occasional VDARE contributor J.P. Rushton published a landmark book called " Race, Evolution, and Behavior," which documented how this black—white—East Asian pattern (what I now call "Rushton's Rule") was found in a remarkable variety of behavioral and physical traits, even in obscure aspects like percentage of fraternal twins. The book became hugely notorious and Rushton was even placed under criminal investigation by the Canadian police.

Now, his specific explanation for Rushton's Rule remains arguable, but what struck me as bizarre was how so many claimed that this basic pattern couldn't possibly exist. After all, I'd noticed Rushton's black—white—East Asian trichotomy more than a decade before. All I could think was that if you lived in a multiracial big city and hadn't observed Rushton's Rule all around you, well, you must not get out much. I guess, though, that George Orwell was more insightful when he observed, "To see what is in front of one's nose needs a constant struggle."