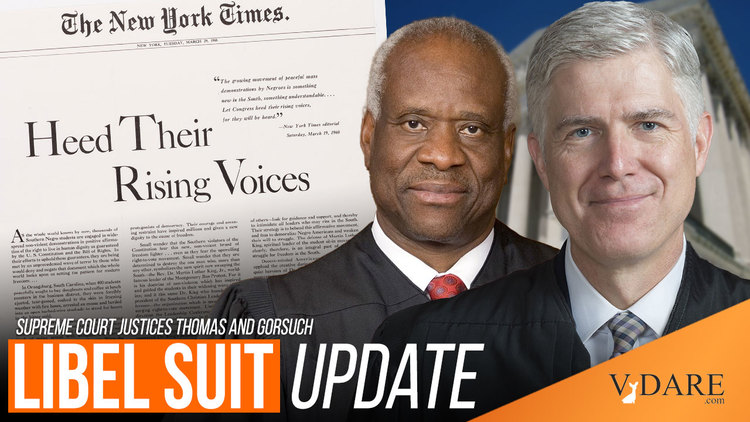 Our appeal in our libel case Brimelow vs. New York Times has been accepted for oral argument i.e., an appearance before a judge, which is a good sign. It will be heard in the Federal Second Circuit Court of Appeals on August 31, 2021.

Earlier and significantly, District Court Judge Katherine Polk Failla had found that the New York Times’ smear in the original January 15, 2019 article—that I am an "open white nationalist"—was a factual allegation, and thus potentially libelous. Since the disastrous 1964 Sullivan decision,  and its 1974 extension in Gertz, Main Stream Media outlets have routinely claimed that absolutely anything they say is “opinion,” and hence protected. But Judge Failla deprived the New York Times of this escape route. Unfortunately, she then claimed that the New York Times’ later "stealth edit," removing the word “open” (and adding a hyperlink to the discredited CultMarx vigilante gang the Southern Poverty Law Center), provided sufficient "context" to let it off the hook.

In fact, of course, the New York Times is still arrogantly refusing to acknowledge this stealth edit in print, despite claiming such acknowledgements as a point of honor in its published code of conduct. So the original libel still stands—no reader dependent on the hard-copy edition of the newspaper will know a correction has been made. And it remains, uncorrected, in e.g., the Congressional Record.

In other words, the New York Times has admitted it was wrong implicitly, but won’t fess up explicitly.

(I get email from readers arguing that I shouldn’t sue the New York Times because I should be proud to be called a “white nationalist.” This misses the point. VDARE.com has repeatedly said that it regards “white nationalism,” in the sense of the political defense of white interests, as legitimate and even inevitable in a multiracial society. But it’s simply not a title that I personally can claim. The New York Times may think I’m an “open white nationalist,” but the fact is that I have repeatedly rejected this honor. My position is that I am a civic nationalist, albeit a pessimistic one, i.e., I look forward to voting for Michelle Malkin when she runs for President on an Immigration Moratorium plank. So the New York Times was just WRONG, and hence vulnerable (as its stealth edit made clear it knows). Moreover, in the current climate, an accusation of “white nationalism” is very serious—it makes you a target of the Biden Regime’s ongoing communist coup.

Ironically, but to our great joy, the heroic Project Veritas subsequently prevailed in an identical opinion vs. fact action against the New York Times in New York State court. Of course, that litigation continues. But we take this as a further sign that the disastrous Sullivan decision is crumbling. After all, the media in the rest of the Anglosphere get along without it, and the U.S. did fine without it for over 200 years.

Yet more signs: on July 2, U.S. Supreme Court Justices Clarence Thomas and Neil Gorsuch wrote powerful dissents (here and here) in the case of Shkelzen Berisha vs. Guy Lawson et al., in which the son of a former premier of Albania sued over a book that claimed he had been involved in an arms-dealing scandal.

As usual, lower courts had taken the lazy view that Berisha was a “public figure” and therefore not entitled to the truth, regardless of what it was. The U.S. Supreme Court declined to intervene.

But Justice Thomas—who has emerged as a truly remarkable figure—dissented, repeating his opinion, earlier expressed in McKee vs. Cosby (2019), that Sullivan should be revisited again. He wrote: “Public figure or private, lies imply real harm.” He specifically said: “Think of those who have had job opportunities withdrawn over false accusations of racism or anti-Semitism,” citing the ludicrous Woke feeding frenzy over Leif Olson [Bloomberg Law tried to suppress its erroneous Labor Dept. story, by Erik Wemple, Washington Post, September 6, 2019]. And he also noted: “Take, for instance, the shooting at the pizza shop rumored to be ‘the home of a Satanic child abuse sex ring involving top Democrats such as Hillary Clinton,’” citing 'Pizzagate' Gunman Sentenced To 4 Years In Prison,  by Merrit Kennedy, June 22, 2017. Of course, this Satanic child abuse story was exactly one of the examples I gave when first introducing our action against the New York Times.

And, of course, the Ruling Class won’t listen because it thinks it can simply shout down all criticism i.e., no respectable person dares ask about PizzaGate or President Obama’s birthplace.

Perhaps the Ruling Class has forgotten?

Justice Gorsuch, a Trump nominee, has been a disappointment to many (for example, here and here). But now, for the first time, he has joined Thomas in challenging Sullivan—a brave step, given the corporate media’s enormous vanity.

Gorsuch specifically noted the accelerating deterioration of media standards that has followed Sullivan:

When the Court originally adopted the actual malice standard, it took the view that tolerating the publication of some false information was a necessary and acceptable cost to pay to ensure truthful statements vital to democratic self-government were not inadvertently suppressed. See Sullivan, 376 U. S., at 270–272. But over time the actual malice standard has evolved from a high bar to recovery into an effective immunity from liability. Statistics show that the number of defamation trials involving publications has declined dramatically over the past few decades: In the 1980s there were on average 27 per year; in 2018 there were 3… [My emphasis].

And he pointed to the result:

The bottom line? And It seems that publishing without investigation, fact-checking, or editing has become the optimal legal strategy. [Emphasis in original]

This, of course, is exactly what the New York Times did with me. Reporter Trip Gabriel did not contact me at all, but merely ripped off a New York Magazine story, which he misread. Elsewhere, I have described this sort of thing as “Not Journalism, but Googlism.”

Rules intended to ensure a robust debate over actions taken by high public officials carrying out the public’s business increasingly seem to leave even ordinary Americans without recourse for grievous defamation… [G]iven the momentous changes in the Nation’s media landscape since 1964, I cannot help but think the Court would profit from returning its attention, whether in this case or another, to a field so vital to the “safe deposit” of our liberties.

Litigation is notoriously uncertain. And the political environment is unprecedentedly hostile. I don’t know if we, or Project Veritas, can prevail and reverse the Sullivan License To Lie. Judges might very well prefer a more “sympathetic” a.k.a. Politically Correct plaintiff—maybe if someone sues Tucker Carlson.

So this is why I have to conclude by asking our loyal and much-loved donors to help us in Brimelow vs. New York Times Co. Throughout the bitter years in which VDARE.com’s honest efforts to build a self-financing business, for example as an Amazon Associate or as a Google AdSense partner, were abruptly and arbitrarily cut off by Politically Correct corporate bureaucrats, we have been comforted and sustained by our donors’ instant and angry awareness of what was being perpetrated and their willingness to rally around.

Now I must ask you to continue to help us in striking back against the heart of the Regime Media.

Taking on the New York Times will be horribly expensive. But we honestly feel we have no choice.

And, while the New York Times can well afford litigation, my experience in the MSM was that libel actions are an immensely painful and salutary experience for the defendant regardless of the outcome.

But it is a check on libel that can only be activated if victims litigate.

Please give generously. Not just to defend freedom for all Americans, but to help ensure that the cause of immigration patriotism is not driven entirely out of public debate.

My family and I will be most grateful—and so, I sincerely believe, will be those who the Founders referred to in the Preamble to The Constitution, as “ourselves and our posterity.”