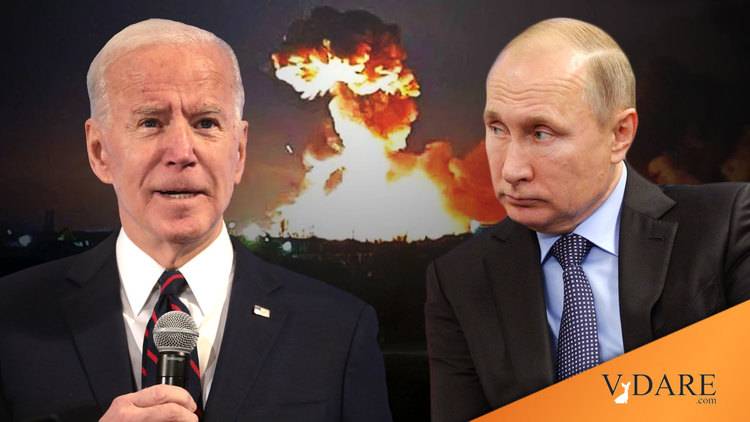 Patrick J. Buchanan: Did We Provoke Putin's War in Ukraine?

When Russia's Vladimir Putin demanded that the U.S. rule out Ukraine as a future member of the NATO alliance, the U.S. archly replied: NATO has an open-door policy. Any nation, including Ukraine, may apply for membership and be admitted. We're not changing that.

In the Bucharest declaration of 2008, NATO had put Ukraine and Georgia, even farther east in the Caucasus, on a path to membership in NATO and coverage under Article 5 of the treaty, which declares that an attack on any one member is an attack on all.

Unable to get a satisfactory answer to his demand, Putin invaded and settled the issue. Neither Ukraine nor Georgia will become members of NATO. To prevent that, Russia will go to war, as Russia did last night.

Putin did exactly what he had warned us he would do.

Whatever the character of the Russian president, now being hotly debated here in the USA, he has established his credibility.

When Putin warns that he will do something, he does it.

Thirty-six hours into this Russia-Ukraine war, potentially the worst in Europe since 1945, two questions need to be answered:

How did we get here? And where do we go from here?

How did we get to where Russia—believing its back is against a wall and the United States, by moving NATO ever closer, put it there—reached a point where it chose war with Ukraine rather than accepting the fate and future it believes the West has in store for Mother Russia?

Consider. Between 1989 and 1991, Mikhail Gorbachev let the Berlin Wall be pulled down, Germany be reunited and all the "captive nations" of Eastern Europe go free.

Having collapsed the Soviet empire, Gorbachev allowed the Soviet Union to dissolve itself into 15 independent nations. Communism was allowed to expire as the ruling ideology of Russia, the land where Leninism and Bolshevism first took root in 1917.

Gorbachev called off the Cold War in Europe by removing all of the causes on Moscow's side of the historic divide.

Putin, a former KGB colonel, came to power in 1999 after the disastrous decadelong rule of Boris Yeltsin, who ran Russia into the ground.

In that year, 1999, Putin watched as America conducted a 78-day bombing campaign on Serbia, the Balkan nation that had historically been a protectorate of Mother Russia.

Against whom were these countries to be protected by U.S. arms and the NATO alliance, the question was fairly asked.

The question seemed to be answered fully in 2004, when Slovenia, Slovakia, Lithuania, Latvia, Estonia, Romania and Bulgaria were admitted into NATO, a grouping that included three former republics of the USSR itself, as well as three more former Warsaw Pact nations.

Then, in 2008, came the Bucharest declaration that put Georgia and Ukraine, both bordering on Russia, on a path to NATO membership.

Georgia, the same year, attacked its seceded province of South Ossetia, where Russian troops were acting as peacekeepers, killing some.

This triggered a Putin counterattack through the Roki Tunnel in North Ossetia that liberated South Ossetia and moved into Georgia all the way to Gori, the birthplace of Stalin. George W. Bush, who had pledged "to end tyranny in our world," did nothing. After briefly occupying part of Georgia, the Russians departed but stayed as protectors of the South Ossetians.

The U.S. establishment has declared this to have been a Russian war of aggression, but an EU investigation blamed Georgian President Mikheil Saakashvili for starting the war.

In 2014, a democratically elected pro-Russian president of Ukraine, Viktor Yanukovych, was overthrown in Kyiv and replaced by a pro-Western regime. Rather than lose Sevastopol, Russia's historic naval base in Crimea, Putin seized the peninsula and declared it Russian territory.

Which brings us to today.

Whatever we may think of Putin, he is no Stalin. He has not murdered millions or created a gulag archipelago.

Nor is he "irrational," as some pundits rail. He does not want a war with us, which would be worse than ruinous to us both.

Putin is a Russian nationalist, patriot, traditionalist and a cold and ruthless realist looking out to preserve Russia as the great and respected power it once was and he believes it can be again.

But it cannot be that if NATO expansion does not stop or if its sister state of Ukraine becomes part of a military alliance whose proudest boast is that it won the Cold War against the nation Putin has served all his life.

President Joe Biden almost hourly promises, "We are not going to war in Ukraine." Why would he then not readily rule out NATO membership for Ukraine, which would require us to do something Biden himself says we Americans, for our own survival, should never do: go to war with Russia?