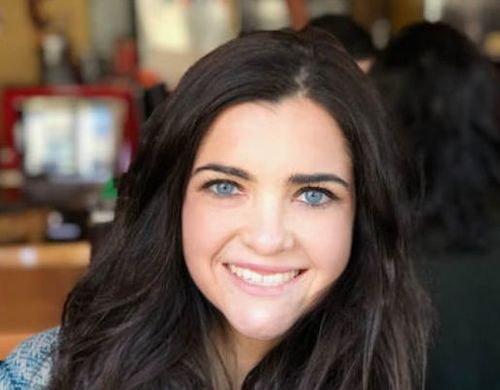 INSIDER’S Nicole Einbinder interviews VDARE.com’s Peter Brimelow: “’White Supremacist’ Is The Equivalent Of Me Calling You A Communist.”

I see that Main Stream Media-licensed immigration patriot/ Trump supporter-lite Victor Davis Hanson was annoyed at the editing of a phone Q&A he did with the New Yorker’s Isaac Chotiner [Tweet him] published as The Classicist Who Sees Donald Trump as a Tragic Hero [February 20, 2019], and demanded that the full transcript be published, which, needless to say, doesn’t seem to have happened. It’s certainly true that Chotiner’s introductory claim that Hanson “has a history of hostility to undocumented [i.e. illegal] Mexican and Central American immigrants [sic—actually aliens], who he claims are undermining American culture” is absurd, as I documented in my American Conservative review of Hanson’s wonderful but distinctly wimpish 2003 book Mexifornia.  But the fact is that rising tide of Leftist lunacy means that MSM reporters/ PC enforcers now feel they have a particular license to lie. No patriot should ever talk to them over the phone without recording it (looking at you, Rep. Steve King). Personally, I insist on conducting MSM interviews by email—which, significantly, scares many away. However, answering stupid questions does focus the mind and the exchanges have resulted in a couple of useful articles (here and here). 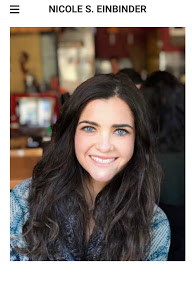 Recently, I had an exchange with Nicole Einbinder [Email her]of something called thisisinsder.com. She seems to be a nice sheltered twenty-something who has never thought about any of the issues she was charged with reporting and, not surprisingly, I wasn’t sufficiently inflammatory to be quoted in White nationalists and the alt-right are disillusioned with Trump — and some are joining the Yang Gang. [March 26, 2019]

To Einbinder’s credit, she did pick up on the anomaly that many so-called white nationalists/ supremacists (Facebook has officially decreed they are the same thing, so they must be, right?) are intrigued by Chinese-American Democrat contender Andrew Yang:

For many nationalists, Yang's ethnicity is a non-issue. Picciolini  [Tweet him] the former white supremacist, said "If you look at their views of white supremacy, they hold Asians in very, very high regard because of their exclusive culture," adding that "They believe that Asian culture has it right."

But Einbinder quickly puts that through the ideological converter:

"Certainly while [Trump] didn't create [the white nationalist] problem, he's lit the fuse that has sparked it to grow once again," Picciolini told INSIDER. "I think things are going to get worse before they get better, and that's because the government has not focused on white supremacy as a threat." 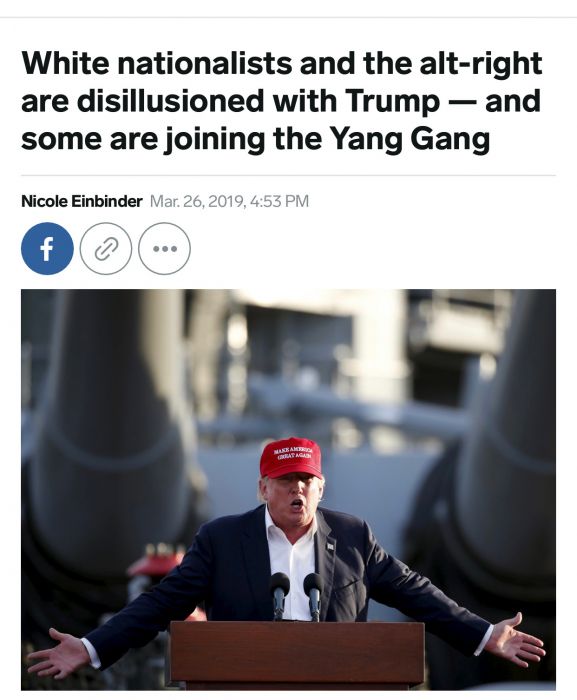 Also, we are not “far right.” Everyone else is far Left.

We are immigration patriots, in the sense that we think current immigration levels are an existential threat to America. (We used to be “immigration reformers,” but that term was stolen by the Amnestiacs, with the usual MSM collusion).

On Trump: My sense is that immigration patriots have reached a breaking point with Trump, because of his failure to legislate or even get control of the border, and particularly because of his sudden talk about INCREASING legal immigration and his treatment of Ann Coulter e.g. John Derbyshire here.

Ann Coulter is well able to take care of herself & doesn't need me doing the job: but for me & I'm sure many, many other Former Trumpers, this https://t.co/14wfxZUTXd is the last straw. The guy is worthless ─ a stupid bullshitter who got very lucky https://t.co/4bTmWRpVK3 .

One of those links goes to Trump tweeting against Ann Coulter, the other to the Z-Man blog, which calls Trump a “stupid bullshitter who got very lucky” based on Trump’s betrayal of gun owners after Las Vegas.

Personally, I think Trump is completely unpredictable and it’s not impossible he’ll rotate back. But he’s sure going to have to DO something to get e.g. Ann back on board.

You are right that there’s intense bitterness that Trump is not supporting his supporters e.g. the Trump DOJ, instead of litigating against AntiFa, which has essentially violently driven the Dissident Right and even Conservatism Inc. types like Charles Murray out of the public square, is instead prosecuting Trump supporters who simply defend themselves.

He’s certainly correct that the number of white terrorist attacks is utterly minuscule compared to Muslim attacks (or even black crime). (The ADL numbers are obviously fallacious—e.g. no real evidence the Parkland shooter [Nikolas Cruz] was a white nationalist and the Kroger shooter had been married to a black woman.)

But as the New Zealand shooter Brenton Tarrant put it in his manifesto[PDF]  (which you should read), Trump as “a symbol of renewed white identity and common purpose” won the election. That’s not “small”, even if “as a policy maker and leader” he’s done nothing.

See above on general thoughts.

I think Trump won as an implicitly white candidate, although he shows absolutely no sign of being anything other than a civic nationalist.

But this is also why the Left opposes him so hysterically, and that’s resulted in an unprecedented wave of (non-governmental) repression of Dissident Right sites (see here).

Trump has done absolutely nothing about this, although even just tweeting about it would help.

So Trump’s victory actually made it MORE difficult to express “white nationalist [or even patriot] thought.”

But ultimately, what drives “white nationalist thought” is demography. Whites are realizing there is no place for them in the Democratic Party. It’s tipping, like a housing project.

My impression is that they feel more exposed, persecuted—and embittered.

The internet was critical in breaking the MSM’s gatekeeper function. Since Trump’s election, however, there’s been massive shadow-banning, deplatforming etc. by Silicon Valley SJWs. The good news is that, as far as I can see, there is opposition to  Silicon Valley right across the political spectrum and some sort of regulation/ legislation is inevitable. The bad news is that the Democrats will try to smuggle in censorship. Trump/ GOP are too stupid to notice.

It’s completely nihilistic in that no-one has any belief Yang can or will do anything. It’s just a desire to screw things up.

Personally, I could never support Yang because I’m a one-issue voter and he’s useless on immigration.

I believe the links above clarify that. I’m not a white supremacist or even a white nationalist, although I do think that whites have common interests they can legitimately defend.

I regard myself a civic nationalist, although a pessimistic one, because I think immigration policy is importing racial polarization. VDARE is a forum site and will publish anyone of any color or creed who has rational criticism of the post-1965 immigration disaster.

You have to realize that “white supremacy” and “white nationalism” (there’s a difference, but they’re usually conflated) are simply terms of abuse the Left uses to suppress rational criticism of immigration policy, and to intimidate the GOP from appealing to its own base.

It’s the equivalent of me calling Beto O’Rourke (or you) a Communist.