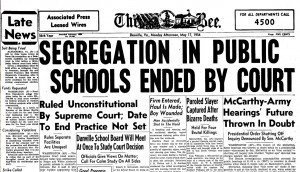 Brown is one of those politically correct decisions, the status of which is independent of facts and understanding. Law school academics, such as UCLA law professor Eugene Volokh and George Mason University law professor David Bernstein, think that Brown was a Supreme Court case about southern segregation. As long as they make clear that they are against southern segregation, Volokh and Bernstein don't have to know anything else, such as for example, that Topeka is not in the south or that Brown was a consolidation of five cases, 60% of which were not in the south. Neither academic has any idea of Brown's legal history. They don't need to know. All that is important is that they support the Brown decision as the best thing since baked bread.

Why does Brown generate unthinking, uninformed support? Could it be that Brown is supported because it is understood as a continuation of Reconstruction against the south? Has Brown become central to the intellectual and moral ascendancy gained for minorities by exploiting WASP guilt? Is this intellectual and moral ascendancy based on white guilt the reason that anyone who points out the cons of the Brown decision risks being demonized?

One party to the decision, Department of Justice official Philip Elman, revealed in the February 1987 Harvard Law Review that the Brown decision was the product of an ex parte dialogue between a sitting judge (Frankfurter) and a litigant (Elman), which transgressed the fundamental ethical norms for judges. When Elman spilled the beans about the conspiracy, Brown's supporters, including the New York Times and the Dean of Harvard Law School, among others, condemned the impropriety used to orchestrate the outcome. [Elman, Philip (interviewed by Norman Silber), The Solicitor General's Office, Justice Frankfurter and Civil Rights Litigation, 1946-1960: an Oral History, 100 Harvard Law Review 817 (1987).]

It took Frankfurter and Elman 18 months, from December 1952 to May 1954, aided by death and illness among the justices, to orchestrate the decision. The reason it took 18 months was that the entire Court and opposing counsel understood that Thurgood Marshall's brief, in the words of Justice Robert H. Jackson, "starts and ends with sociology." The Court opposed overturning legal precedent on the basis of nonlegal opinion, especially when such extraordinary action risked unleashing the ruthless use of federal judicial power.

Justice Frankfurter's orchestration of the Brown decision might not have succeeded without the death of Chief Justice Frederick M. Vinson. Vinson was a jurist who felt bound by the constitutional role of the judiciary. His replacement was a politician, California governor Earl Warren, who had no inhibitions about exercising as much power as he could get away with.

The Brown decision effectively ended constitutional law by teaching a generation of judges that the Constitution has no meaning apart from the judiciary's subjective feelings about social policy.

Brown also destroyed legal precedent. Today law schools teach their students to find support for their briefs not only in social science but also in literature. The current debate among legal scholars is whether non-American legal sources are credible authority, such as rulings from courts in foreign countries. The Brown decision rests on Gunnar Myrdal's book, An American Dilemma. Tomorrow's decision may come from lyrics to a rap song or from a legal decision in a South African or a French court.

Dr. Roberts is coauthor with Lawrence M. Stratton of  The New Color Line.

Paul Craig Roberts [email him] was Assistant Secretary of the Treasury during President Reagan’s first term. His home page is paulcraigroberts.org.

He was Associate Editor of the Wall Street Journal. He has held numerous academic appointments, including the William E. Simon Chair, Center for Strategic and International Studies, Georgetown University, and Senior Research Fellow, Hoover Institution, Stanford University. He was awarded the Legion of Honor by French President Francois Mitterrand. He is the author of Supply-Side Revolution : An Insider's Account of Policymaking in Washington; Alienation and the Soviet Economy and Meltdown: Inside the Soviet Economy, and is the co-author with Lawrence M. Stratton of The Tyranny of Good Intentions : How Prosecutors and Bureaucrats Are Trampling the Constitution in the Name of Justice. Click here for Peter Brimelow’s Forbes Magazine interview with Roberts about the epidemic of prosecutorial misconduct.