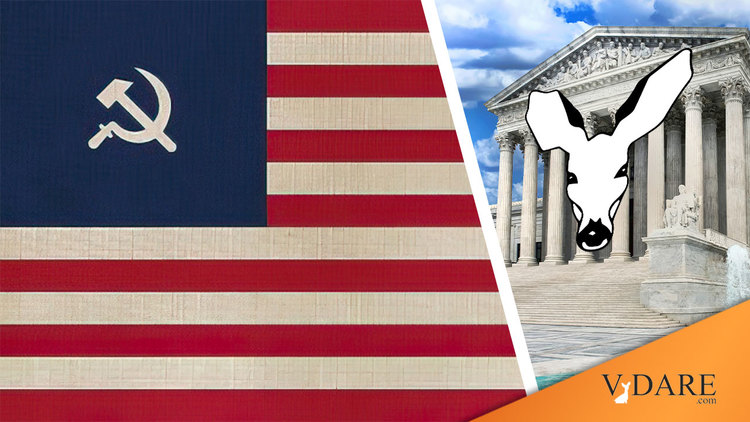 Earlier: Have At 'Em, Antifa! The New Free Speech—Ann Coulter On VDARE Vs. Colorado Springs

WARNING TO VDARE.COM SUPPORTERS: February 25, 2022 (or shortly thereafter, we may not know for a while) could be a particularly hard day in our 22-year life—and we’ve survived many hard days since the Ruling Class (Tech Totalitarian division) began seriously repressing Immigration Patriot dissent in 2015. On February 25, our petitions for Writ of Certiorari to the Supreme Court of the United States in the cases of VDARE Foundation v. City Of Colorado Springs AND ALSO (everything happens at once) Brimelow vs. New York Times have been put on SCOTUS’ conference docket here and here.   That means that on that day SCOTUS may decide to hear either or both of our cases, or it may simply delay deciding on either or both—or it may reject either or both.

As a journalist, I hate to say this, but if SCOTUS fails to take up New York Times, that just means the swine at the New York Times can continue with their License To Lie and to disregard their own much-touted ethical code—for now. (It’s increasingly clear that the disastrous 1964 Sullivan decision that gave the US media its License to Lie in contradistinction to other Common Law jurisdictions like Canada and the U.K. is going to be revisited at some point, e.g., At the Supreme Court, another hint of trouble for New York Times v. Sullivan?, Reporters Committee For Freedom Of The Press, January 18, 2022).

But if SCOTUS fails to take up Colorado Springs, that means local governments will be newly free to deny police protection to dissidents, exposing them to Antifa violence. This would be a staggering reversal of Civil Rights Era precedent, and an institutionalization of Anarcho-Tyranny…at least against white Americans.

To give an example of how this could work: after repeated cancellations by private venues, Jared Taylor’s American Renaissance now holds its annual conferences at Tennessee’s Montgomery Bell State Park, which, because it is government-owned, is covered by the First Amendment and cannot reject the event. But the State of Tennessee did attempt to charge American Renaissance for the security costs arising from Leftist demonstrations. Again, as in Colorado Springs, this was a blatant attempt to reverse Civil Rights Era precedent. So American Renaissance sued, and won (details here).

However, if Colorado Springs is allowed to stand, the precedent it sets means the State of Tennessee can in effect reverse American Renaissance’s victory simply by refusing to extend any police protection to it at all.

This would be a classic case of Anarcho-Tyranny—the government refuses to protect a speaker it dislikes and relies on its tacit allies on the Left do the actual repressing.

And it’s not just coming soon to an America near you—it’s here, on February 25, unless SCOTUS takes up our VDARE Foundation v. City Of Colorado Springs.

When we embarked on litigating Colorado Springs, we were given to understand that it was a slam-dunk Civil Rights case. Indeed, our first lawyer was so confident that he took the case on contingency.

It’s a chastening thought that the only reason we have been able survive repeated, shocking, and in my view unconstitutional, rebuffs is because of the intense loyalty of our wonderful donors in supporting us in our bitter fight. No normal person or organization could, or would, pay the price.

But right now I’m not asking for money…particularly. There will be time for that if SCOTUS takes up VDARE Foundation v. City Of Colorado Springs.

I guess I’m asking for prayers. Not just for VDARE.com, but for America.

How could we possibly have gotten into this situation where—with no publicity at all, except for heroes Michelle Malkin in 2019, podcaster Stew Peters in 2021 and Ann Coulter yesterday (February 16, 2022)—politicians are right on the point of being handed the power to suppress basic civil liberties, not just of unpopular groups, but of groups whose views are actually popular—popular, that is, with everyone except the political and media elite. (Donald J. Trump, whose August 15, 2015 Policy Paper [PDF] on immigration was exactly what VDARE.com has long advocated, swept the Colorado Springs area in 2016 and 2020.)

What happened to Equality Before The Law?

I just got off the phone with one of the eminent lawyers I know who have been quietly urging us to fight on this case. I asked him what legislative redress there would be if Colorado Springs is allowed to stand.

He said: “I guess we’d have to pass the First Amendment again and add WE MEAN IT THIS TIME!”

So I guess I’m also asking for ideas. What can Americans do if neither litigation nor legislation is the answer to what can only be described as emerging Woke Totalitarianism?

I’m sorry to say this could be headed in a very bad direction.

But it’s not our fault. We have given these cases everything we have. We have given the lower courts every chance to correct these obvious wrongs. For rights to survive, citizens must be prepared to defend them. I am proud of the VDARE.com family—writers, lawyers and of course donors—for not flinching in defense of those rights. It makes me very happy to think how irritated our arrogant opponents must have been to find repeatedly that they couldn’t just swat us away.

And let me stipulate: It’s not impossible that February 25 could be a huge victory. SCOTUS is unpredictable, but our eminent lawyer friends seriously think that the court could decide to take up VDARE Foundation vs. City of Colorado Springs, because of the importance of the principle at stake, and because of the recklessly self-indicting way in which Mayor John Suthers made clear his objection was to VDARE.com’s politics.

The consequences of a victory would be enormous. SCOTUS would hear the case, and then quite possibly force the lower court to address it. It would thus make clear that the “government speech doctrine,” i.e., that Mayor Suthers was only expressing an opinion, cannot be used to cause the suppression of disfavored dissidents. And at the very least, we would get Discovery, i.e., access to internal communications concerning the matter, which in the City of Colorado Springs could very well be devastating.

Of course, regardless of what happens, VDARE.com will fight on.

After surviving, along with the rest of the Dissident Right, years of relentless deplatforming, demonetizing, shadow-banning and calumny, we are meeting this new kritarch-enhanced attack on our civil rights with what I can best describe as dark determination.

After all, we’ve already bought and moved our headquarters to the Berkeley Springs Castle in West Virginia, at considerable expense and inconvenience, precisely so that we and other patriots can hold private meetings there without fear being Canceled.

Ignoring the risk of being smeared as White Supremacist by delving back into America’s unmentionable cultural heritage, our considered position is that expressed in the great Anglo-Saxon epic The Battle of Maldon, as translated by the much-abused J.R.R. Tolkien:

Will shall be the sterner, heart the bolder,
Spirit the greater, as our strength lessens.

(I’ll write about Brimelow Vs. New York Times in the next few days.)