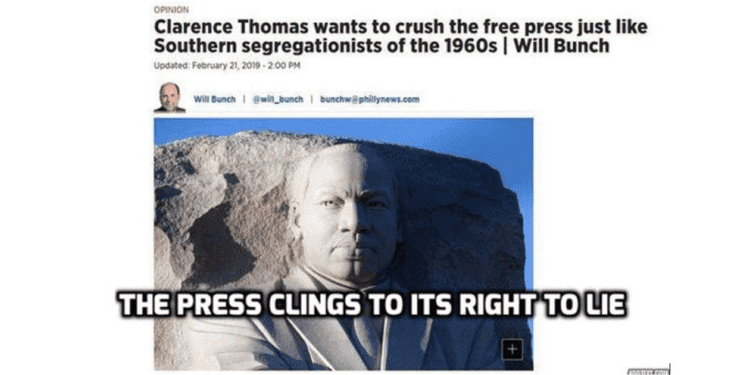 Earlier: Instapundit On Peter Brimelow's $5M Lawsuit Against The NYT—"I Would Have Added A Zero To The Claim"

2/2 Underlying problem: SCOTUS' disastrous 1964 SULLIVAN decision has come to mean that U.S. MSM (unlike in any other common law jurisdiction) has a license to lie. Justice Thomas right to note recently that this can't go on https://t.co/2IbOsY8bcg

What's going on here is that the press gained the right to lie in the case of New York Times Co. v. Sullivan (1964), to lie about public officials like Donald Trump or Steve King. Later this was expanded to give them the the right to lie about ordinary people—like Nick Sandmann of Covington Catholic, or opinion journalists like us—if they can be called public figures.

See my NY TIMES Vs. Sullivan And The Law Of Libel: Press Clings To Its Right To Lie  and EDWARDS vs. DETROIT NEWS—Court Ends Libel Protection For Whites.

Because a Southern public official named Sullivan was libelled by a black Civil Rights committee in the pages of the New York Times, the court said that libel laws couldn't be launched by public figures unless  "actual malice"—knowledge that statements are false or in reckless disregard of the truth—"is alleged and proved."

In 2017, I wrote that I didn't necessarily want an activist conservative court to revisit

"the arguably unconstitutional Sullivan vs. New York Times, granting the media a broad right to libel public figures—because I like that. (Under First Amendment law, I have the same protection against libel suits as the NYT.)

However, I can see where President Trump, one of the most comprehensively libelled public figures in modern history, might feel differently."

Imagine how Brett Kavanaugh must feel about this! However, the Supreme Court doesn't have to change any standards for both Trump and VDARE.com to win libel suits against the New York Times. Their "reckless disregard" and "actual malice" is palpable.

What we do need, that the Trump campaign doesn't, is money.

Click here to donate to our Legal Defense Fund.